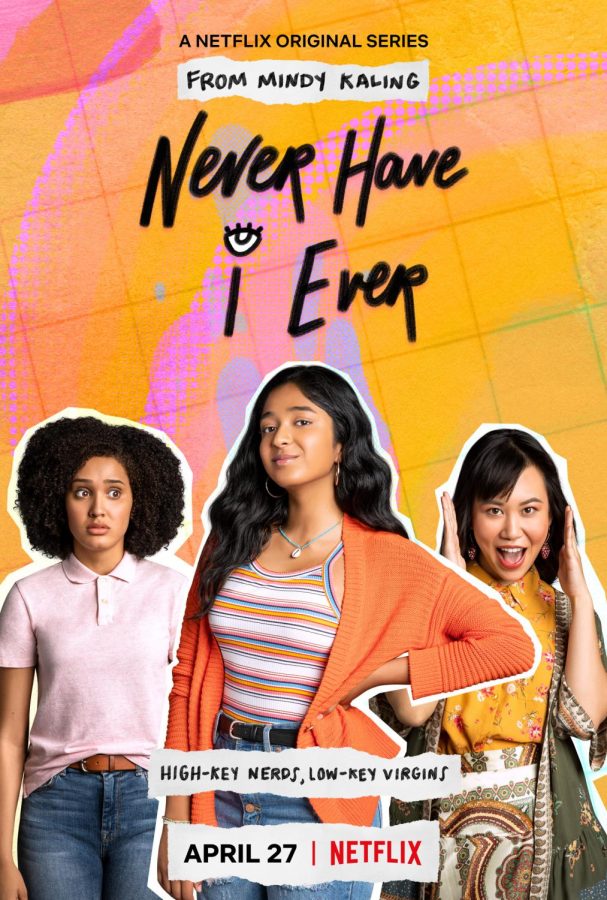 Used under Fair Use from Netflix

Never Have I Ever

The release of Never Have I Ever represents a monumental moment in Hollywood history. For the first time ever, Netflix viewers were treated to an Indian lead character. A stereotype-breaking, first-generation Indian-American lead. Viewers follow Devi Vishwakumar as she deals with the sudden loss of her father, friend drama, boy troubles and a broken relationship with her mother. It’s a classic coming-of-age story with an Indian twist.

At first, it was refreshing to see a person of color deal with the problems many Indian-Americans have dealt with over the years. However, once the initial satisfaction of being represented on the big screen wore off, it became apparent that the main plot of the show was overwhelmingly unoriginal.

Over the course of ten agonizing episodes, Devi finds some way or another to throw herself at Paxton Hall-Yoshida, Sherman Oaks High’s resident brain-dead jock. In fact, each episode employs the exact same formula: Devi likes Paxton, Devi ditches friends for Paxton, Devi gets rejected, Devi is sad and alone. The show follows the nerd loves jock formula to a T. How many times has this storyline been rehashed, remixed and reproduced?

Although Devi’s character arc reaches a satisfying conclusion at the end of the season, it seems like she never learns from her mistakes. This, along with her intrinsic hot-headedness and braggadocious personality, makes it difficult to appreciate Devi as a character. Paxton, too, falls victim to lack of character development and is ultimately just another high school stereotype.

The lack of character development plaguing Devi and Paxton, however, doesn’t translate to the other characters. In fact, each side character is far more relatable than Devi or Paxton. Each one faces their own difficulties: Ben stares down his absentee parents, Eleanor strives to reconnect with her mother and Fabiola questions her sexuality. While all three supporting characters are somewhat stereotypical, their emotional progressions throughout the series were candid and more importantly, realistic. As a result, the show handles sensitive topics such as sexuality and mental health thoughtfully and appropriately. Eventually, it became more fulfilling to watch for the subplots in each episode than to follow Devi’s drama.

Although Devi’s character has its obvious flaws, the show did an excellent job at capturing the life of an average Indian-American teen. Devi’s relationship with her culture in particular was very relatable. Non-Residential Indian teens around the world can relate to the experience of sitting through a long puja or being pressured by their parents to attend an Ivy League college. Although critics of the show claimed the show relied too heavily on these “stereotypes,” Devi’s journey would not be anywhere near as interesting or relatable had the show been about a completely whitewashed Indian family. The broad generalizations made about Indian culture may be cliched, but they represent the reality of many Indian-American teens. Her love-hate relationship with her culture is not only integral to the story’s progression, but harrowingly genuine as well.

That being said, the show would have benefitted from exploring Devi’s cultural background more thoroughly. The reason that many of Never Have I Ever’s Indian aspects came off as stereotypical was the limited screen time each cultural topic received. Aside from a recurring piece in which Devi’s cousin is resisting an arranged marriage, there is only one episode focused entirely on Indian culture. In failing to fully address the nuances of Devi’s culture, the writers missed an opportunity to develop the themes of cultural balance and identity that many Indian teens struggle with today.

Despite its average plot, Never Have I Ever still makes for very engaging storytelling. The show manages to handle serious topics well while also retaining its lighthearted, 90s-inspired humor. However, the wasted potential of the characters looms over the series. The writers could have covered other sensitive topics with grace, but deliberately chose not to. What could have been a great show that tackled complex modern issues ultimately falls flat due to its formulaic nature.