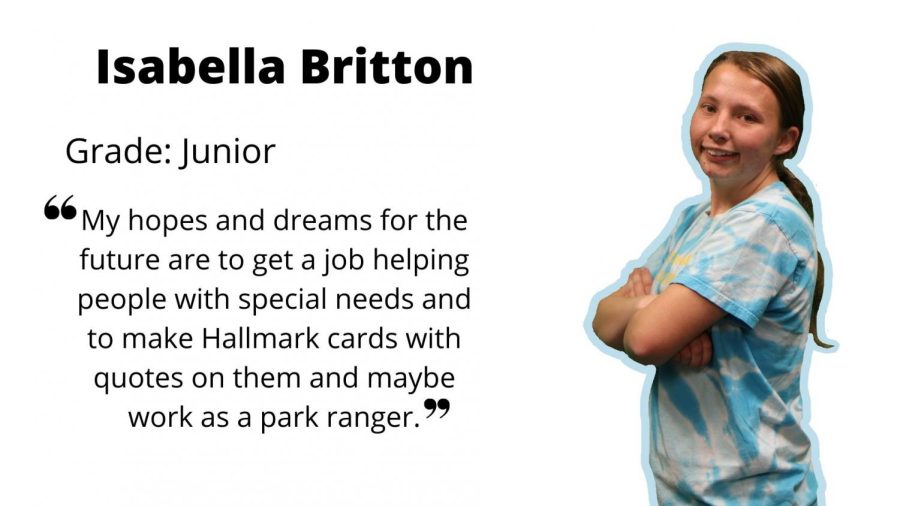 One day, junior Isabela Britton noticed her friend seemed a little down. The next day, Britton slipped her a card with a wonderful message. Britton’s friend wasn’t the first to receive such a gift. Britton, a caring and sweet individual, likes to give her friends hand-made cards to cheer them up.

“It’s usually when someone’s having a hard time or needs some encouragement,” Britton said. “I draw a picture on the cover with their name and then I write down what I think is awesome about them.”

Outside of school, Britton loves working with her hands and does many different crafts besides card-making. She’s dabbled in origami, and has recently made a shield from posterboard and construction paper and a metal candle-holder inspired by Lumiere in “Beauty and the Beast.”

Britton ventured into the world of woodshop and metalshop about two years ago while helping out her father in the garage. Now, Britton’s father often helps her with metalwork and woodwork, and together, they have made a shoe rack for the house. Some of Britton’s favorite pastimes are playing board games, cooking, baking and writing poetry.

On campus, Britton can often be spotted dressed colorfully or in some kind of sports gear. Her energy is as boundless as her creativity, which is part of the reason why Isabela commits herself to three sports every school year — softball, field hockey and soccer. Britton’s decision to join softball was somewhat spontaneous; she thought it might be a fun experience and decided to try out. Britton’s mother had played field hockey in high school, which got Britton thinking about joining the team during her own high school years. Britton has been playing soccer since she was 7 and wanted to continue with the sport. Soccer first introduced her to the importance of teamwork through the medium of sports.

“I love being part of a team,” Britton said. “It’s easier to make friends and I feel like it helps you grow when you communicate with other people and learn how to encourage others, because when you’re on a team, you don’t want to bring people down. You want to build them up, so they can play better.”

Balancing schoolwork, extracurriculars and sports is often a struggle for student athletes; for Britton, it is even harder, with three sports taking up much of her time outside of school for most of the academic year. However, with some help, she manages to remain a dedicated team athlete, keep her grades up and pursue her interests.

Whenever she can, Britton tries to act with kindness and empathy on and off the field. She has a learning disability, which she believes has helped her understand that everyone is different, but special. During one summer, she volunteered at a soccer camp held by her brother which promoted inclusion and empathy. There, she led activities for children with and without disabilities.

Britton is still unsure about her future, but wants to do something meaningful, a goal she has already been making steady progress toward. No aspect of her time at Lynbrook so far seems to be ingenuine or forced; instead, she has filled it with fulfilling activities, memories and relationships and has put her best effort into creating a fulfilling high school experience for others.