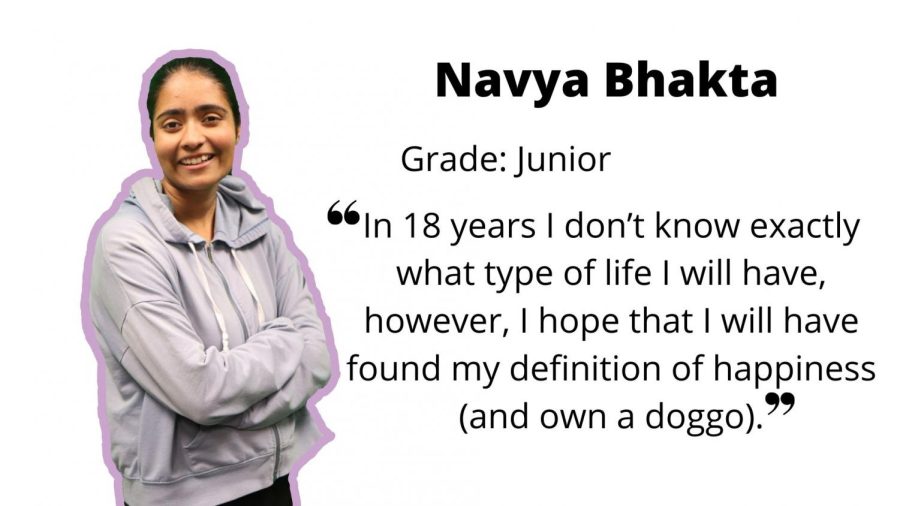 Junior Navya Bhakta is a crucial part of life on campus as a member in Acapella Club, National Honor Society and Link Crew. She also sings in Concert Choir and plays forward on the JV field hockey team.

Bhakta’s first brush with National Honor Society took place when she applied for a STTAR tutor through the club’s program in her sophomore year. Bhakta benefited greatly from the help, and she and her tutor got close as well, inspiring her to join and start tutoring others this year.

“What I’m realizing now that I’ve become a tutor myself is that it’s not just you tutoring them,” Bhakta said. “Rather, we’re both working together to solve the problem, in a partnership as equals.”

Sophomore year marked the start of her field hockey journey as well, and she was immediately welcomed into the family-like dynamic of the team. She appreciates the support the teammates have for each other while simultaneously challenging themselves to be better.

“Through my experience, I grew both as a player and as a person,” Bhakta said. “I don’t think there is a single thing in high school that has influenced me as much as field hockey has.”

Bhakta loves how the sport challenges the team as a whole, as well as each individual, with opportunities to reach new heights presented in each game.

“I think in my freshman year, I really lost the ability to push myself,” Bhakta said. “I put myself in a box. Field hockey brought back my perspective on hard work, grit and pushing myself beyond what I’d set for myself.”

Another area of growth Bhakta is proud of is the improvement of her stress management skills and how she has become more introspective over the years. She is thankful to her brother for advising her to seek balance in her life and stop fretting over minor incidents, setting her on the path to becoming who she is today.

“As I’m getting closer to being an adult, it’s going to be my job to reflect on myself and decide how my emotions and actions affect who I am,” Bhakta said. “I’ve realized that some things just don’t work out. But to be honest, if it was me in my freshman year, I probably would’ve broken down in tears.”

Before the end of high school, Bhakta wants to take as many risks as possible.

“Even if it doesn’t go the right way, whatever happened happened for a reason, and no matter how small of an impact, it will still make you grow as a person.” Bhakta said.