Sophie Jaquish and Derek Li sing through highs and lows

Disengaged from outside commotions and engrossed in the melodies of their instrumental accompaniment, juniors Sophie Jaquish and Derek Li find serenity in singing for their choir of eight and six years, respectively: Colorful Universe Children’s Singing Troupe. Jaquish and Li began their journeys with singing on converse paths.

Having already paid for voice lessons that her younger sister did not meet the age requirement to attend, eight-year-old Jaquish’s parents persuaded her to take her sister’s place in the choir at Colorful Universe.

“I wouldn’t say I have a naturally-gifted voice,” Jaquish said. “After I discovered that I loved singing, I started wanting to train harder and noticed that I was rapidly improving.”

Jaquish finds her greatest motivation to be from her private vocal coach of two years, Eugene Brancoveanu. He always encourages Jaquish to step out of her comfort zone.

“He really believes in his students and pushes us to what we think our limits are,” Jaquish said. “Then he pushes us to find out that that’s not actually our limit.”

Jaquish’s passion for singing largely stems from her emotional connection to songs.

“When I listen to songs, I get deep into them — sometimes they make me cry,” Jaquish said. “I love that feeling, and I want to be able to do that for other people too.”

“Every singer makes mistakes while performing,” Jaquish said. “And of course you panic, but you just have to keep going. Learning to be comfortable doing this has helped me deal with many other similar situations in life.” 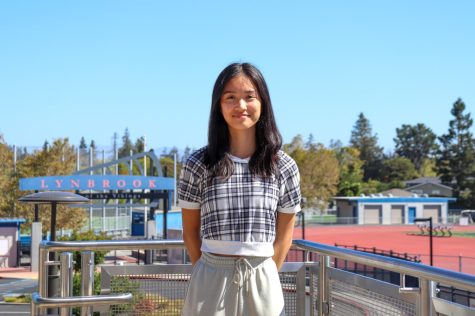 (she/her) Susanna is a junior and this year's sports editor! Outside of journalism, she loves photography, tennis, web development and looking at minimalist...

Li embarked on his singing journey from a young age with passion instilled in him. Ever since he could talk, Li loved to sing along to any tune around him. Throughout elementary school, Li had his parents record him as he stool on a bed or stool and sang the songs he had learned at school.

“My parents said I was really expressive and energetic,” Li said. “Singing brought me a lot of joy, so I decided to join a choir. I started training professionally with private lessons too, and from there, my singing just improved more and more.”

Li felt that his original choir was too big, making it difficult for him to connect with members on an intimate level, so he joined Colorful Universe, a smaller choir with a community fit for Li. He has privately trained with his current vocal coach, Eugene Brancoveanu, who has always made him feel comfortable while also presenting challenges that are just within Li’s capabilities.

“I also really like the way he teaches — he explains how my body works as I sing, making singing feel less abstract,” Li said.

Performing at Carnegie Hall, the nation’s most prestigious classical music venue, as a finalist in the American Protégé International Vocal Competition is among Li’s most memorable achievements. Li and his friend won second place in 2020 with a duet, granting them invitations to perform in New York City in December 2021.

“Flying out to Carnegie Hall and performing there sounds like just a dream for a high schooler, so I’m really grateful to have had this opportunity,” Li said.

Li views singing as a form of self-expression that has helped him build up self-confidence. The confidence he has developed throughout his singing career has allowed him to express himself more freely, ultimately boosting his overall performance.

As Li enters his final years of high school and prepares to graduate, he hopes to continue singing and further expand his self-confidence.

(she/her) Susanna is a junior and this year's sports editor! Outside of journalism, she loves photography, tennis, web development and looking at minimalist...