The realities and challenges of returning to campus 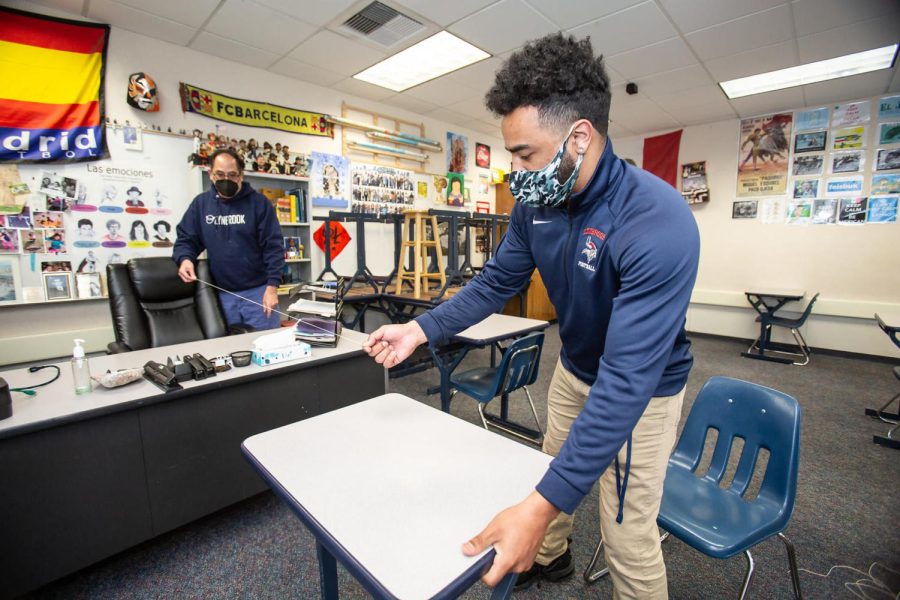 Staff members worked hard to prepare the campus in accordance with public health guidelines in the weeks leading into the return to campus.

Many students did not expect the opportunity to return to school for the remainder of the 2020-21 school year. After Santa Clara County dropped to the orange tier on March 23, FUHSD decided to offer a hybrid learning plan for students who wished to return to campus.

On April 19, the Monday after Lynbrook’s spring break, some students returned to campus to attend school on campus for two or four days each week, or continue remote learning for the rest of the school year. Students who are attending class two days a week come onto campus on either Monday and Tuesday or Thursday and Friday while students in the four-day cohort attend for all four days. All students participate in Homeroom and other activities remotely on Wednesdays, no matter which option they choose.

All teachers have returned to campus, with an exception of those who were cleared by the district to continue to work from home. On campus, every person is expected to adhere to health guidelines, which require them to stay three feet apart in classrooms, wear masks and use hand sanitizer throughout the day.

“There will be expectations and reminders for moving through the halls and being in the quad,” Assistant Superintendent Trudy Gross said. “Our food service has been set up with markings and distance stickers to designate the direction that students should travel and distance to keep. We are anticipating that students understand this, but if there are issues, we will have reminders and disciplines that include being sent home.”

To support the teachers in their return to school, the district has allowed teachers to request additional technology such as monitors, webcams, speakers and microphones. The district has also sent teachers tech guides on how to set up their classrooms and offered appointments with on-site support to students and themselves.

Discussion of plans for returning to campus began during the beginning of the 2020-2021 school year. While there are mixed opinions about whether now is the right time to return, most staff agree that students learn better in an in-person environment than online due to the increased ease of social interaction and collaboration.

“Learning is a social activity,” Assistant Principal of Activities Susan Rocha said. “And part of learning comes from seeing something and turning to the person next to you and saying, ‘Hey, what did you think of that?’, or asking a question out loud. I believe that there’s a social component to learning that oftentimes is missing at home, and if you came in person, some of the discussion opportunities found in small groups or some of the social parts of learning would be more accessible.”

Even though the district originally hoped to re-open around Thanksgiving break, the sudden spike in cases and hospitalizations then delayed those plans to April. Since then, the district has been working to offer students the option to return to campus while making appropriate preparations, such as upgrading the campus’ bandwidth and adjusting spacing between desks in classrooms. Lynbrook has confirmed that the campus has enough bandwidth, and that there is enough space on site for all the students who wished to return to safely attend all their classes.

Standardized testing will be affected by plans to reopen campus as well. Lynbrook has already offered students chances to take the SAT and PSAT on campus earlier this school year. The standardized test that will be affected the most is probably the CAASPP, which is currently still scheduled to take place before the end of the year.

“LHS admin does not want to take away instructional time from students, but we know that it’s important that we offer the opportunity for students that are using it for early assessment, a program that determines if a student is ready for college-level work,” Gross said. “The CAASPP will occur before the end of the year, but one of the challenges is that the online software is not functional. So we will have an in person version, but we know that not everybody is going to come because not everybody is returning to in person instruction.”

Currently, there are plans for an in-person graduation in June, when most seniors will have had the option to get the vaccine. Although there will not be a traditional jam-packed stadium audience for graduation, seniors will be allowed to return to campus for the ceremony if they choose to.

As for the 2021-2022 school year, plans have not been finalized as the district wishes to gauge the reaction from students after returning to school on April 19. Even so, there will be changes, as the hybrid plan is only temporary, like last year’s emergency learning plan. Students and staff alike retain hope that by this time next year, school will have returned to as close to normal as possible.