“Raya and the Last Dragon”: A fresh Disney princess movie 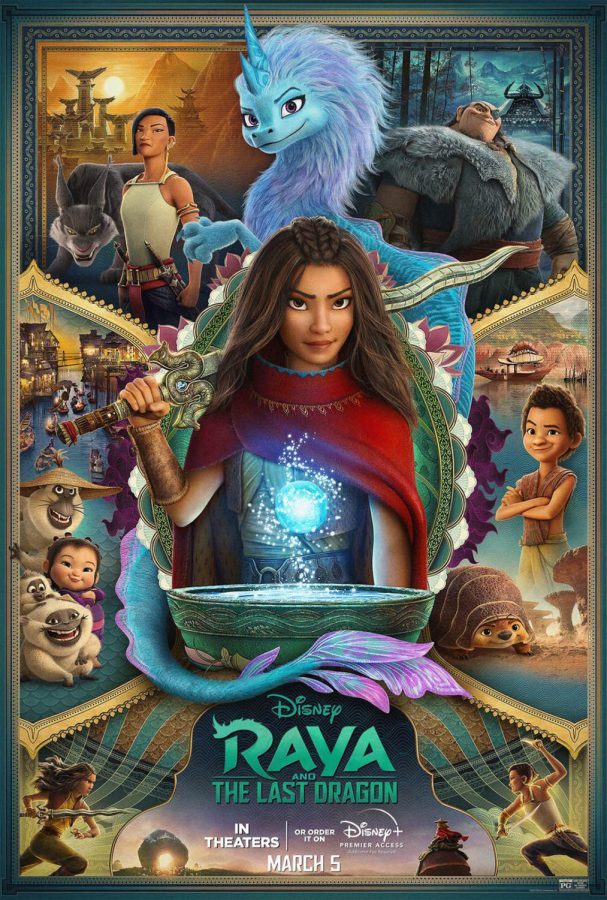 Raya and the Last Dragon is a movie for fans of all genres and tells a visually and emotionally compelling story.

Another story of a princess who finds love on a crazy, magical adventure? Nope. Packed with action scenes and touching moments with the help of well-developed characters and exquisite animation, “Raya and the Last Dragon” is a movie for fans of all genres and tells a visually and emotionally compelling story.

As the chief’s daughter and protector of a dragon gem that wards off the Druun, ethereal spirits that turn people to stone, Raya, voiced by Kelly Marie Tran, trains to be a skilled warrior to protect the gem and her tribe. When the Druun are accidentally released, Raya teams up with Sisu, the last dragon voiced by Awkwafina, and lonely characters from other tribes to save the world.

The movie focuses heavily on action as Raya travels around the different tribes of the fictional world of Kumandra collecting the gem pieces. Namaari, the main antagonist and source of Raya’s distrust, chases Raya throughout the movie, and the fluid animation beautifully captures the intensity in each of their battles. Their frequent encounters never feel repetitive as each battle is unique. The settings vary from water to land, and they use a vast array of weapons and martial arts techniques to settle their disputes.

While the fight sequences are engaging, the exposition and characters are the heart of the movie. Raya’s source of distrust and main conflict are rooted in a tragic childhood betrayal. Raya is not only traumatized by the betrayal of her new friend, Namaari, but also the loss of her father and entire tribe. Even more heartbreaking is the fear and sorrow in Raya’s eyes as she watches her father sacrifice himself to save her. Raya’s traumatic backstory sharply contrasts those of other Disney characters and provides for an intriguing, fresh story.

Along her quest to find all the pieces of the gem in order to save those turned into stone by the Druun, Raya finds Sisu, who is naive and continually challenges Raya’s view of the world. Raya then meets Boun, captain of the boat and chef of the restaurant; Little Noi, also jokingly known as the con baby; and Tong, a lonely survivor hiding behind a barbaric, axe-wielding facade. All the characters come from diverse backgrounds but share one major detail in their backstory: they lost their family to the Druun. The scene with them floating flowers down the river in honor of their loved ones beautifully expresses the loss and sorrow, making Raya’s quest more meaningful.

While the other characters share a connection and help Raya overcome her trust issues, Namaari’s development does not fit well in the movie. Her role as the antagonist is flawed and may even be detrimental to the moral of the story. Trust is a two-way street, and both parties have to put in equal effort to heal the rift. Raya randomly decides to trust Namaari in a key moment even though she has barely done anything to reconcile with Raya after the betrayal. In fact, she blames Raya when things go wrong.

Although Namaari’s character is poorly developed, “Raya and the Last Dragon” sets itself apart from other Disney princess movies. There’s a nice balance between action and emotion, and the often dark tone and wonderful animation complement the story well, making this a compelling story for viewers of all ages.