The unsustainable truth of thrifting 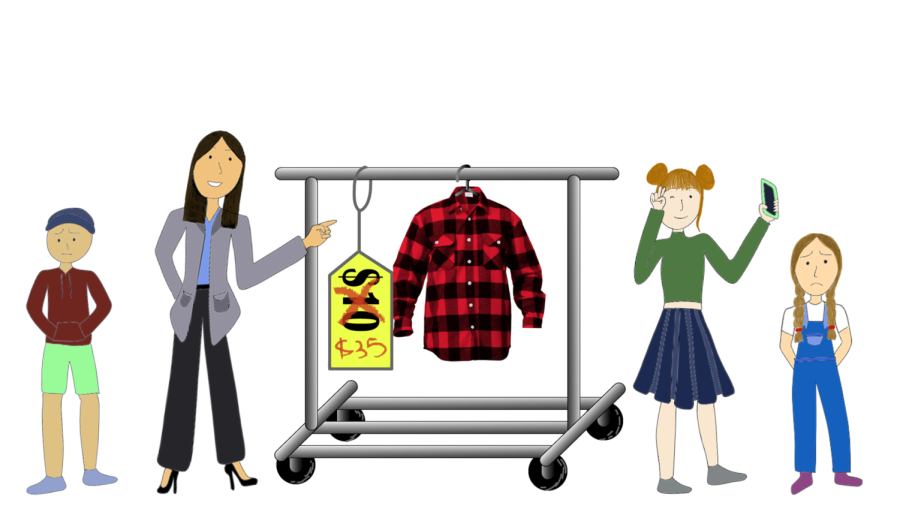 As thrifting, both online and in physical stores, becomes more popular, the gentrification of thrifting becomes an increasingly prevalent issue.

Items in high demand tend to come at ever-increasing costs that not everyone can afford. Thrift stores, which offer second-hand products at cheap prices, have become a useful alternative for individuals with a more limited budget. However, with the rise of the “vintage” trend, thrift stores have become popular places for people of above-average income as well. As a result, prices at thrift stores have been rising, resulting in the phenomenon known as the gentrification of thrift shops.

The concept of reselling and reusing hand-me-down items has been in existence since the 18th century. However, it was not until the mass production of goods during the Industrial Revolution that large-scale reselling businesses rose to popularity. Because goods, especially clothing, were mass produced, people discarded first-hand clothing faster than before. As more people disposed of clothes before they were worn out, there was more and more used clothing that was going to waste. Seeing a business opportunity out of such products, the Salvation Army, which needed funding for its various charity programs, launched an operation in 1897 that provided shelter to low-income citizens in return for used clothing. These pieces of clothing were then sold for cheap prices, forming the world’s first thrift stores. Ever since, thrift stores like Goodwill have become a popular place for salvaging well-maintained used clothing at a low price.

The term “gentrification” was originally coined by British sociologist Ruth Glass, who used it to describe the phenomenon of middle-class citizens moving into neighborhoods previously dominated by working-class citizens in Britain. With this movement, the poorer sector of the neighborhood was ultimately forced out of their residences because they could not afford the rising living costs. Although the term is still mostly used to describe the migration of wealthy individuals into poor neighborhoods, it has recently become associated with thrifting to explain the rise of middle-class consumers shopping there. Because the average thrift shop consumer is now able to afford clothing at higher prices, prices at thrift stores have risen in response, decreasing the affordability of clothing for the working-class people who rely on thrift stores.

In the early days of thrift shops, thrifting was taboo to average or high-income consumers because shopping for second-hand clothes was an admittance to being poor. However, this idea gradually became obsolete due to a rise in “retro” fashion, or outfits inspired by popular styles in earlier decades. In a clothing market that grows increasingly competitive, brands use fusions of styles inspired from the past and newer fashion of the present to catch consumers’ eyes.

“I feel like a lot of styles from the 80s or 90s are making a comeback just because they bring a sense of nostalgia and romanticism,” Lynbrook Class of 2020 alumna and online reseller Anna Chiang said. “People are now mixing and matching vintage pieces with more modern silhouettes, and I believe that future fashion will continue to include elements of the present and the past.”

Another catalyst that recently contributed to the popularity of thrifting was the release of “Thrift Shop” by American hip-hop duo Macklemore & Ryan Lewis in 2012. In contrast to the majority of the rap industry, which focused on flaunting riches, the song speaks of maintaining style while saving as much money as possible via thrifting. After “Thrift Shop” topped charts and received critical acclaim, many people followed in the lyrics’ footsteps and began to thrift.

To fit in with the reviving of old trends, many people have found thrift stores to be a good source of inspiration for new outfits because thrift stores are full of older, second-hand items. Thrift stores have gradually become a place to shop for fashionable items instead of places for affordable clothing, and prices have crept up gradually as a result.

“There’re always some people who see something trendy on Tik Tok, Instagram or Pinterest and offer over 200 dollars on something like a slip dress,” Chiang said. “I don’t want to call it scamming, but some sellers are definitely pricing clothing way higher than it is worth.”

This trend of rising costs at thrift stores was furthered by the emergence of online thrifting and virtual resellers. To take advantage of the retro trend, sellers buy large quantities of clothing from thrift stores and resell them online for a much higher price, further decreasing the availability of cheap clothing on the market. Specifically, on Depop, an online store with social media-like features, there is a high incentive to resell clothing because the platform boosts influencers’ fame as well, increasing the amount of highly-priced used clothing circulating through the market.

“[This trend] can be categorized as a fancy economics term called arbitrage,” said John Ifcher, Economics professor at Santa Clara University. “Arbitrage means recognizing something that is undervalued in one market and then selling it in another market. You see arbitrage happening throughout the economy, not just in thrift stores, and it’s certainly a business model in thrifting and in any market.”

When done in moderation, online resellers can bring together the best of both worlds: the reseller’s expertise in thrifted clothing and convenience for the buyer. However, resellers sometimes cross the line to make a profit. In some cases, resellers clear the shelves in physical thrifting stores to sell the clothing items at drastically higher prices on online reselling platforms.

“One thing that I’ve noticed that I find really interesting is that a lot of people will go into the kids’ section and buy little kids’ clothes,” junior Suanna Zhong said. “And then, on the description, they’ll write that it’s a crop top in size extra, extra small, and they’ll sell it for $30 to $40. I think that’s absolutely ridiculous. If it’s for style, I totally understand it, and I think it’s cute too, but just go to a thrift store yourself. And if you’re one of those people who are going to thrift stores and taking all the baby clothes and selling them on Depop, sorry, but you’re a bad person.”

In addition, online thrifting poses new quality and security issues that were not a problem in physical thrift shops. Because buyers cannot see or feel the clothing in person, it is often difficult to determine the quality and worth of the item. In addition, scamming on online resellers is also a prevalent issue. Zhong, vice president of Lynbrook InDesign, advises buyers to check the seller’s reviews and avoid paying through third-party apps.

“It’s always important to ask if you’re not sure,” Zhong said. “You can always message the seller about measurements or quality or you can ask them to post extra pictures. It’s always better to ask them just to be sure, instead of buying an item that arrives in poor quality. There are a lot of clothes that are in poor quality because people don’t want these clothes, so it’s really important to just check; these things can be avoided.”

Although there is a general consensus that prices are indeed rising at thrift shops, opinion remains divided on the ethics of increasing the popularity of thrifting. Some believe that, although prices have been rising, thrifting is a great opportunity to advocate for the reuse of old clothing and minimize unnecessary waste. The average American disposes of 82 pounds of clothing each year, a troubling trend that can be curbed by thrifting. Not only does it prevent clothes from being sent to the landfill prematurely, but it also cuts back on the natural resources needed for the production, assembly and transportation of new clothing due to a lower demand for first-hand apparel.

Furthermore, even if the clothes are in poor condition, which is a common issue for second-hand clothing, some thrifters can alter the clothing item or reuse the fabric to create something new. For example, junior Joy Kuo, treasurer of Lynbrook InDesign, often alters clothing that she purchases from thrift stores.

“Quality is definitely important, but I feel like you shouldn’t necessarily shy away from things that have holes or even stains because you can probably find a way to cover it up or cut it out,” Kuo said. “When I’m thrifting, I focus more on the fabric than the actual clothing type. Oftentimes, I will completely deconstruct it and see what I can make from the fabric.”

On the other hand, some believe that the gentrification of thrifting undermines the original purpose of thrift stores — to provide clothes at a low price for those in need. When even second-hand clothing becomes less affordable, the gap between the wealthy and the poor inevitably widens. However, as more people use social media to spread the word about the negative impacts of thrifting gentrification on low-income families, this trend may change.

“I feel like thrifting does become popular for the wrong reasons sometimes,” Chiang said. “Sometimes people just buy cheap second-hand clothing as a hobby or because they see other people doing it. However, I think people will start thrifting more cautiously when they think about low income communities who also use thrifting as their primary means to access clothing and fashion. When people start thinking about these types of issues more seriously, thrifting will become not just a trend but a lifestyle.”