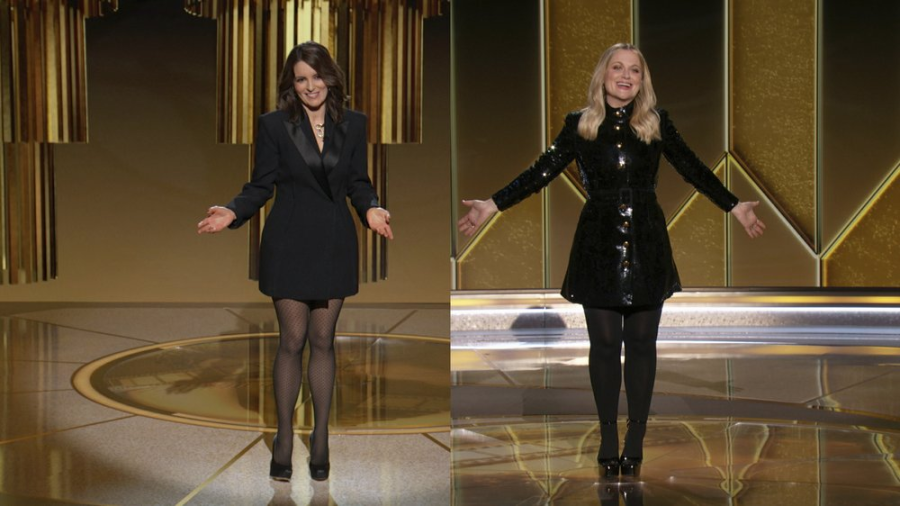 The Golden Globes 2021 adapted to a virtual format due to the COVID-19 pandemic. However, longstanding issues of lack of diversity in nominations and winners overshadowed the event.

The 78th Golden Globe Awards were a more-than-fitting metaphor for 2021: messy, weird, full of Zoom audio issues and spontaneously funny. Celebrities appeared pixelated, with their extravagant finery, families, drinks, dogs, hoodies, Bernie-Sanders-in-mittens cut-outs and more. The hosts co-hosted from opposite sides of the country: Tina Fey from the Rainbow Room in New York City and Amy Poehler from the Beverly Hills Hilton in Los Angeles. The audience consisted of first responders and essential workers wearing formal attire and masks. Coming off a year in which most movies and shows nominated were released to online streaming platforms, the biggest winners were, expectedly, the streaming platforms themselves. The first major entertainment awards ceremony of the year was definitely a change from the norm, as the past year has been, but some old habits have not changed.

Lack of representation and diversity:

The big conversation surrounding the Golden Globes this year was not about the frontrunners for the awards, but rather the lack of Black representation among the award nominees and members of the Hollywood Foreign Press Association (HFPA). Major movies like “One Night in Miami,” “Judas and the Black Messiah” and “Ma Rainey’s Black Bottom” were snubbed for Best Motion Picture – Drama nominations. Made up of 87 journalists from around the world, the HFPA received a lot of flak for its lack of representation both before and during the ceremony, with the hosts and many award winners advocating for the need for representation.

“In the spirit of inclusion, I hope this time next year this ceremony reflects the true breadth and diversity of film and television being made today because there is so much more to be celebrated,” said Dan Levy, winner for Best Comedy Series for his show, “Schitt’s Creek.”

To address the growing controversy about the lack of representation, during the ceremony, three members of the HFPA also spoke about the issue and attempted to provide a positive outlook for the future. Although hopeful, the promises seemed empty, especially considering the fact that those changes could have already been made this year.

“We recognize we have our own work to do,” HFPA Vice President Helen Hoehne said. “Just like in film and television, Black representation is vital. We must have Black journalists in our organization.”

Additionally, the nomination of the Korean-American movie “Minari” in the Foreign Language Film category was the subject of controversy. Directed by an American director, Lee Isaac Chung, “Minari” tells the story of a Korean-American family moving from South Korea to rural Arkansas in the 1980s. Since the characters speak mostly in Korean, the movie did not pass the 50% English requirement to be considered an American film and be nominated in the Best Film and Acting categories. This decision drew controversy, as certain American movies in the past, like Quentin Tarantino’s 2009 movie “Inglourious Basterds,” did not meet the English requirement but were still nominated in these categories.

“Maybe the positive side of all of this is that we’ve made a film that challenges some of those existing categories, and adds to the idea that an American film might look and sound very differently from what we’re used to,” Chung said in an interview with The New York Times. “It’s hard to say, ‘I demand a seat at a table for Best Picture.’”

It is disappointing that such issues of representation still pervade the Hollywood industry, but there were some positive outcomes from the night. A considerable number of awards — including acting awards for Chadwick Boseman (“Ma Rainey’s Black Bottom”) and Andra Day (“The United States vs. Billie Holiday”) and two nominations for “Soul,” an animated movie about a Black jazz player — went to Black talent and stories. Three women were nominated in the Best Director category for the first time, and Chloé Zhao, director of “Nomadland,” became the second woman and first woman of color to win the Best Director award.

Tributes of the night:

The highlights of the ceremony were the honorary awards and tributes. Jane Fonda, legendary actress and activist, won the Cecil B. DeMille Award for “outstanding contributions to the world of entertainment,” and Norman Lear, 1970s television writer and producer, won the Carol Burnett Award for “outstanding contributions to television on or off the screen.” At 98 years old, Lear gave a speech about his journey, and his immense gratitude allowed his humility and wisdom to shine through, even to those who were not previously aware of his impact and significance.

Fonda’s impact on the film industry, social and environmental issues and multiple other career highlights were honored. In her speech, Fonda made sure to show her gratitude for filmmaking and acting, and memorably named the diverse movies and shows that were snubbed by the HFPA. Her pointed speech regarding the need for more representation in all forms of the word summed up the much-needed changes.

“Stories — they really can change people,” Fonda said. “But there’s a story we’ve been afraid to see and hear about ourselves in this industry — a story about which voices we respect and elevate, and which we tune out.”

The Golden Globes also briefly honored Chadwick Boseman, who passed away in August 2020, at the age of 43, due to complications related to colon cancer. In between awards, the show cut to a video of kids being asked different questions about the Golden Globes, to which the kids were completely clueless. But, when asked “Who is Chadwick Boseman?” each child confidently said “Black Panther!” demonstrating the widespread and lasting impact Boseman had on the younger generation through the blockbuster, path-breaking Marvel superhero movie “Black Panther.”

Boseman also posthumously won the Best Actor in a Motion Picture award, his first and only Golden Globe, for his passionate and profound performance of jazz trumpet player Levee in “Ma Rainey’s Black Bottom” (read the Epic’s review of the movie here). His widow, Taylor Simone Ledward, accepted the award on his behalf in a heartbreaking yet powerful speech.

“He would say something beautiful, something inspiring, something that would amplify that little voice inside of all of us that tells you you can, that tells you to keep going, that calls you back to what you are meant to be doing at this moment in history,” Ledward said, wiping away tears.

In a year in which people have experienced countless video call and online communication issues, how could the Golden Globes escape them? The show was set up with all the nominees on a joint Zoom call, and the nominees for each category were highlighted as their categories came up. The first award acceptance speech of the night, for Daniel Kaluuya’s win for Best Performance by a Supporting Actor in Motion Picture for “Judas and the Black Messiah,” itself started with a technical glitch, with Kaluuya’s audio going out for a minute before he could make his speech. Many other speeches went on longer than normal, and it seemed that the winners could not hear the typical speech-ending music.

Fey and Poehler’s side-by-side appearances on the screen, despite the nationwide distance between them, was new. They made sure to draw attention to the peculiarity of the situation, doing tricks like making Fey seem like she was stroking Poehler’s hair on screen. Audio and transmission issues also occurred, with one host sometimes speaking over the other.

The number of sketches that occur during the normal show was also reduced, with the main two being a mock acceptance speech by Kenan Thompson and Maya Rudolph and an award introduction by Kristen Wiig and Annie Mumolo. The decrease in sketches allowed for a little extra time for Zoom transitions and acceptance speeches, though it seemed that the showrunners were figuring out the format of the show behind the scenes along with the audience.

This year’s Golden Globes were the customary beginning to Hollywood’s awards season and paved the way for the technical formats we may expect from future shows until they can be held in person. The celebrities and nominees showed the audience how to ace Zoom style and fashion, and the hosts attempted a new format that worked out in the end. More importantly, the conversations surrounding the awards highlighted the long way Hollywood and the entertainment industry still have to go to be truly representative and inclusive of all voices in art.