Disney recipe review: Beignets from “The Princess and the Frog”

Nostalgia and a New Orleans delicacy 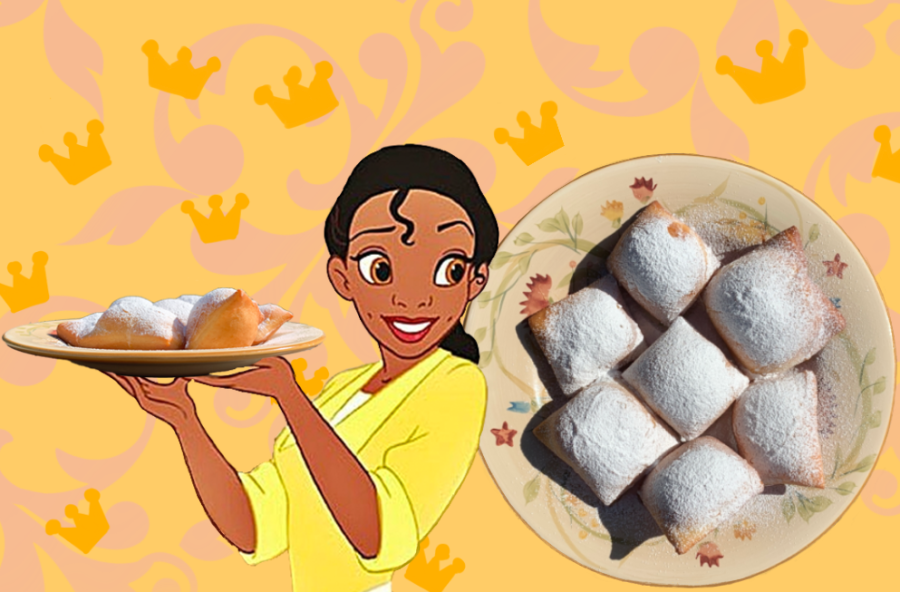 I chose to make beignets, Tiana's signature dish in "The Princess and the Frog."

I remember the first time I watched “The Princess and the Frog” so clearly. In 2009, my family missed seeing the movie in theaters, so my parents bought the DVD (remember those?), and I quickly found my favorite Disney female lead. Tiana was not the typical princess waiting for her Prince Charming — Prince Naveen, actually — instead, she had a dream of opening a restaurant and worked hard for it. Her signature dish was beignets, which were also the key to her earning enough money to finally buy the old sugar mill and transform it into her restaurant. So, when thinking of what to make for this project, I knew I had to make Tiana’s signature dish to see what all the hype was about.

Beignets date back to Ancient Rome, when people first began frying dough. Now a traditional dish in New Orleans, the dish initially made its way to the U.S. through French colonists and Acadian settlers in the eighteenth century. Beignets quickly became a part of Creole and Southern cuisine, and Cafe Du Monde in New Orleans is world-famous for its main attraction: beignets.

Knowing the traditional nature of beignets, I was confused as to which recipe to pick. Each site and video claimed it used the traditional recipe, but the recipes used different ingredients and had different processes. Finally, I gave up my search and went with a trusty Tasty recipe.

The basic ingredients of beignets are things most people would have in their pantries: flour, yeast, milk, eggs, butter and sugar. The steps are pretty simple, too: make, roll and fry the dough. Glad that the recipe was simple and easy to follow, I began the process.

To make the dough, I started off by proofing the yeast in warm water. Am I the only one who loves to watch yeast activate and foam up? I then whisked in the eggs, milk, melted butter and sugar with the yeast. Since the process was pretty simple, I put on “Down in New Orleans” from the movie’s soundtrack and sang along while I worked.

The recipe asks for bread flour, which I had heard about but never used before. Apparently, bread flour has a higher gluten count due to the addition of barley flour, which makes bread dough puff up more than normal all-purpose flour would. Who knew a simple recipe could be a science lesson? Following the ideal of “always sift” that my parents deeply ingrained in me, I sifted the flour with the salt.

I then added the yeast mixture to the flour, making a well for the liquid to settle in, and went about mixing and kneading. I love making dough so much that, anytime any type of dough is made in my house, whether it is Indian rotis or pizza dough, I’m the one to do it. The dough was shaggy, as the recipe said it should be, but it seemed a little too dry compared to the relatively tacky doughs in videos I had seen. I added about a tablespoon of milk, which made the dough look and feel a little better.

Now, it was time for the dough to rest for at least an hour. My sister and I were bored, so we ended up watching the entire movie. I had not watched the movie in a few years, so it was nostalgic to sit and sing along to the songs as I used to when I was younger. Like Tiana and her dad, my dad and I share a dream of opening a restaurant, so I enjoyed vicariously living my dream through her. Her successful restaurant opening at the end of the movie made me more excited to try the beignets!

It had been almost two hours of letting the dough rise, but the extra time worked in my favor, since the beignets were going to be extra puffy. I was “Almost There!”

Heating the vegetable oil in preparation for frying, I rolled out the dough and cut it into rectangular pieces. After estimating that the oil would be hot enough, I put two pieces in, and they puffed up quickly! The best part of the process was definitely watching how quickly and smoothly the flat pieces became puffy beignets. I took them out when they were golden brown and fried a few more.

While they were still hot, I drizzled them with honey like Tiana does in the movie and sprinkled a considerable amount of powdered sugar on top.

How can one resist fried dough with sugar? Anxiously, I tried one, and it was everything I expected: carb-y, sugary, wholesome goodness. I do not know if this was a good decision, but I ate two more before my guilt stopped me.

Obviously, I was extremely satisfied with the recipe and the results. The recipe was simple, and the entire process was a wonderful nostalgic trip and break from an otherwise stressful life. And, I got to eat and share a fried dessert with my family! It definitely felt like Tiana’s spirit for food and community was there in those beignets.