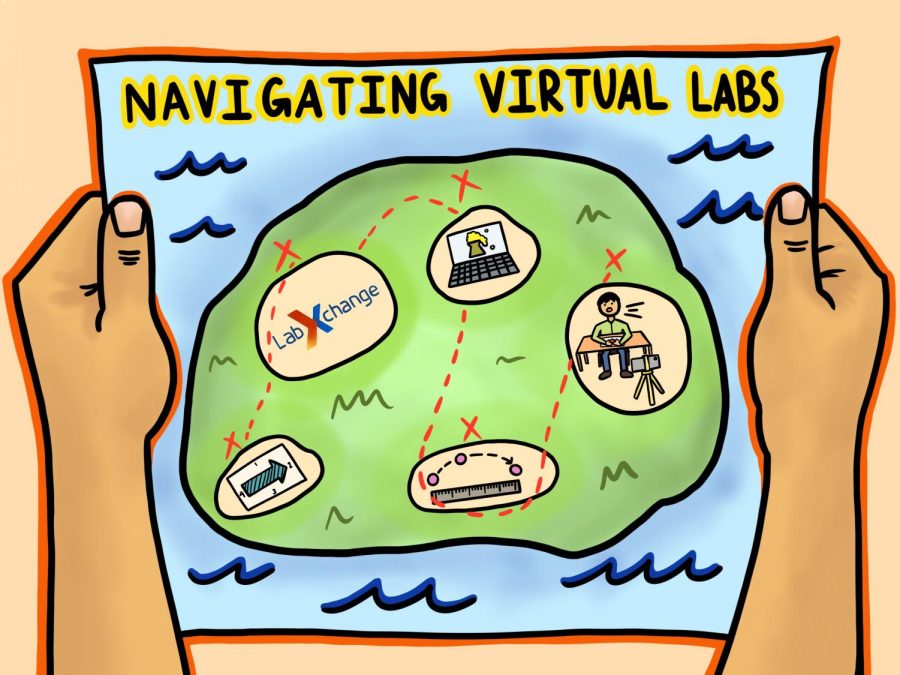 Science teachers navigating virtual learning this year have had to come up with new ways to conduct labs.

At the start of second semester, AP Biology students gear up for the course’s much-anticipated DNA transformation lab. However, this year they were introduced to the laboratory techniques used in biotechnology and bioengineering through simulated modules and videos on the online platform LabXchange. Similarly, students in other science courses are taking on the digital world of lab experiments, and their teachers have had to come up with creative solutions to recreate traditionally hands-on experiences in the virtual classroom.

Usually, the DNA transformation lab serves as a rite of passage for AP Biology students and provides students with a way to apply concepts they have learned throughout the year to a laboratory experiment. Throughout the lab’s six-week duration, students practice techniques such as micropipetting and modifying bacterial DNA to experience laboratory work in fields across biology.

However, the lab could no longer take place in its traditional format due to virtual learning conditions. Instead, AP Biology classes this year took part in a three-week-long digital lab using LabXchange. Designed by Harvard researchers, the platform introduced students to the same techniques used in the DNA transformation lab through modules that included articles, interactive activities and simulations. Interspersed within modules was footage of scientists demonstrating and explaining the laboratory techniques and equipment they use in their work. At the end of each module, students performed a simulated lab, which progressed from simpler micropipetting labs to more advanced experiments such as gel electrophoresis and building a recombinant plasmid. By the end, they had completed 11 modules, the results of which they then analyzed in groups.

Recreating the DNA transformation lab was not easy, and AP Biology teachers feared that a virtual experience would not be as meaningful as the traditional in-person one.

“One of the big concerns was: Is it going to be an engaging and useful recreation of the lab?” AP Biology teacher Isaac Pallone said. “Because I definitely think there are simulations out there that might not be engaging or useful in an educational capacity.”

In the end, students enjoyed the lab and were able to get an idea of what laboratory work is like. The advanced, multi-step nature of the lab was particularly appealing to some students.

“Doing this lab made me more interested in biology, a field I already wanted to pursue, because it showed me how interesting the more advanced labs are,” AP Biology student Anya Sikri said. “The amount of steps they had required me to pay a lot of attention but also allowed me to understand how more complex systems work.”

The Chemistry Department has also implemented online simulations in place of many labs because most students do not have access to the materials required for chemistry experiments. So far, AP Chemistry students have explored gas laws through simulations of gas molecules under different pressures and volumes and learned about the solubilities of various salts through a simulation that allowed them to visualize the dissolution and precipitation process.

However, some labs have still taken place using materials that students have at home. Freshman biology classes were given kits with yeast and lactose to perform a lab in which they watched a balloon inflate as a result of the release of carbon dioxide. In Chemistry Honors, students built models of molecules at home, and AP Biology students modeled DNA methylation and enzymes using paper models. These hands-on techniques allow students to physically engage in the lab.

“It makes them a participant instead of a spectator,” Pallone said. “That’s one of the biggest things you can do to enhance the distance learning experience.”

Some science teachers have also experimented with other techniques to bring labs into the digital landscape. Physics Honors teacher Anshul Agarwal recorded herself conducting electrons through her body using a Van de Graff generator as part of an electrostatics lab for her students. They later watched the footage of her hair standing up in addition to videos of her running various experiments using an electroscope over Zoom. Each video showed the electroscope, a device used to detect the presence of an electrical charge, under a different set of conditions. Students then analyzed the effects each set of conditions had on the device to better understand the processes of charging by contact and induction, in addition to the concept of charge separation. In a similar fashion, Pallone recorded rollie pollies responding to differing environmental conditions for his freshman Biology classes.

Other teachers have opted for live demonstrations. AP Biology teacher Nicole Della Santina demonstrated the processes of gel electrophoresis and onion staining on camera, and Physics Honors teacher Thanh Nguyen performed the electrostatic lab live for his classes over Zoom, which he felt improved the learning experience.

“The upsides of doing it live were enormous,” Nguyen said. “I was able to not only answer student questions and misconceptions as they occurred, but also follow their progress in real-time on the Schoology assignment and provide helpful hints and notes for parts they were struggling with.”

Similarly, Physiology teacher Jason Lee performed a live dissection of a sheep’s brain for his students as part of a series of live dissections that the class will experience throughout the semester. Lee had his students label a sheet of paper with a large arrow and the numbers 1 through 4, each corresponding to the four pins Lee had pinned on the specimen.

When he pointed at one part of the specimen, he would ask his students where another part was in respect to the area they were currently observing. By rotating and holding up their papers, students would indicate the direction in which they thought the other part was. At times, Lee would also ask them to identify sections of the specimen by holding up the paper with the corresponding pin. Lee chose to have his students interact as they watched him perform the lab to make the experience more engaging.

“I could have just made a video and walked it through with a voiceover, but I felt like that would just be too passive,” Lee said. “I wanted to make it as interactive as possible in a setting where students are limited to what they see, say and hear.”

Another method teachers have tried to make labs more active is to have students collect their own data. Physics Honors classes have used this method in two labs so far. In one, students threw projectiles and measured the distance traveled and time taken by the projectile, data points that they then used to calculate their object’s path of motion. In the other, students were tasked with climbing stairs and recording how long it took them in order to calculate the amount of power that they expended in completing the feat. These labs replicate the physical aspect of in-person labs and provide a more realistic approximation of the scientific process.

“Data collection gives students an experience where they can make mistakes and see what goes wrong, which allows them to appreciate the amount of effort that goes into the scientific process,” Agarwal said.

No matter what type of labs students experience this year, all serve a common purpose: to show students real-world applications of lessons they learn in class. Watching science concepts come to life helps students to better grasp that science is all around them and increases their understanding of these concepts. While no virtual method can fully replicate an in-person experience, various approaches have allowed science teachers to continue to engage their students in these crucial learning experiences.

“Although virtual labs lose some of the skills that traditional labs build in students, they still teach them valuable concepts, which is ultimately what we desire,” Lee said. “We’ve all just been trying to make a hand out of the deck of cards we’ve been given.”