Calling: The way to stay connected 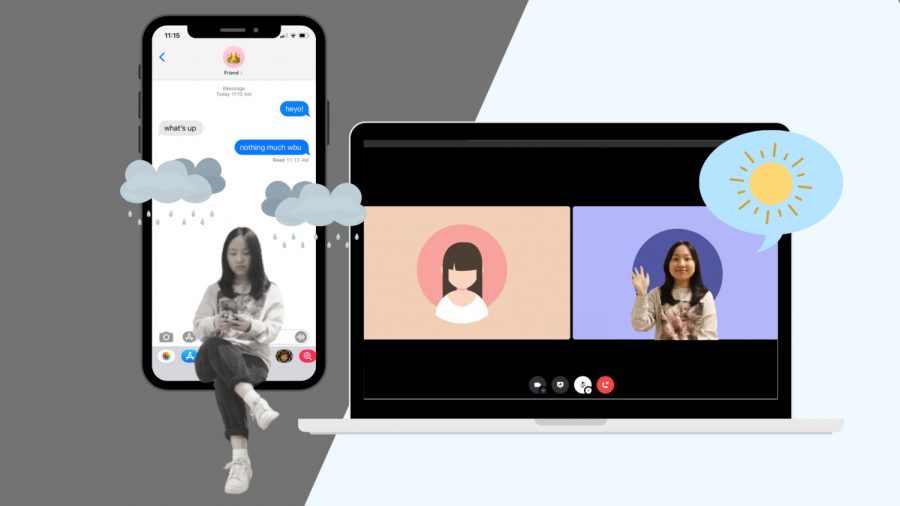 After finding myself drifting away from my friends from months of texting, I’ve realized that calling is a better way to stay connected.

I was elated. Lynbrook had just announced halfway into fourth period that schools were being shut down to slow the spread of COVID-19. I grinned at my friends, excited we would be taking our classes from home. Not knowing when I would be able to see my friends in-person again, I promised to keep in touch and spend time together. I would soon find out that not hearing their voices for months would exact a heavy toll, and this would lead me to rediscover the beauty of the phone call.

My promise to keep in touch didn’t last long. With everyone’s new school and at-home schedules, it was difficult to find time to spend together. At first, my friends and I would text daily, but over the next few weeks,  we started to lose momentum. Long conversations turned into stilted exchanges about homework. Inside jokes were replaced by small talk, and even the answers to “How are you?” seemed halfhearted. I made excuses to avoid video calls, claiming I was too busy 一  I was afraid the dry text messages would be reflected in our spoken conversations.

Ironically, texting, a function made to make communication more convenient, has made ignorance convenient too. I found myself unintentionally putting off messaging a friend back to avoid the upcoming dry conversation or to compose a decent, entertaining reply. Even then, I felt discouraged by the few short texts that would be sent back and forth before the conversation immediately stopped. Emotions such as sarcasm and anger are much harder to perceive on text, whereas there would be no trouble figuring out exactly what someone means in person. Slowly, it began to feel like my friends were fading into the icons on my screen. The text messaging on my phone had disconnected me from everyone I had initially planned to keep in touch with.

During the summer, the absence of school only exacerbated these issues. I put my focus into my studies and my hobbies, but I couldn’t ignore the pang of loneliness I felt when I wanted to talk to someone. If I texted them, would the conversation stop after a few messages? Would I be left with the “read” icon staring back at me?

When school returned in August, I was worried about how I was going to interact with my friends. It had been so long since I had a proper conversation with them. Would they still consider me their friend? However, a part of me knew that this was my chance to finally regain contact with my friends again.

Over the next few months, I reconnected with my friends, but this time instead of solely using text messaging, we also called on Discord. We would listen to music together, complain about homework together and have game nights on weekends.

The smiles, laughter and inside jokes that were missing the previous semester flooded back. When was the last time I had laughed until tears pooled out of my eyes? I don’t even remember. But sitting in front of my computer screen, virtually indulging in the company of my friends while we bantered about who was the better player of the video game made me realize that the emptiness inside me was gradually beginning to dissipate.

While I could read the text messages on my screen, there was no way to truly read the person behind the phone. Calling provided me a real-time insight into what my friends were doing, feeling, or thinking. Unlike the casual conversations on text messaging that stopped immediately once the topic was exhausted, conversations on call went on and on, with jokes and laughter shared throughout. And honestly? Hearing the sound of voices outside my family after so long was so refreshing.

Modern day technology has become so advanced that you can communicate with someone across the world by tapping your fingers on a small screen. However, it has become just as effortless to avoid the bright notifications as they appear.

Without in-person interactions, there is a gap that we cannot fill. But we must try our best to close that gap. It was easy to take friendships for granted when we saw each other face to face on a regular basis. Though convenience may be the easy option, friendship isn’t about choosing the easy way out. It is important to actively spend time with the people we care about, and hearing their voices is a good first step.