The false portrayal of teens in media 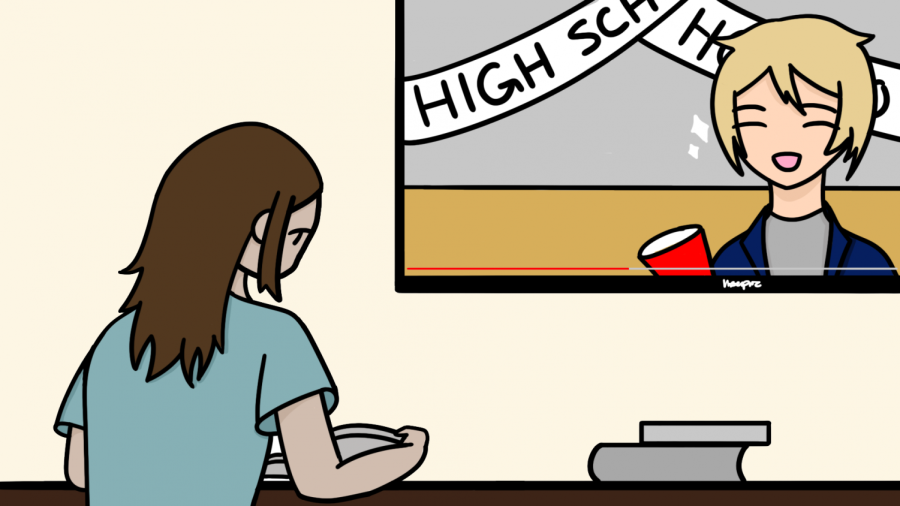 The media often portrays teenage life to be more carefree than it actually is.

Every teenager experiences struggles while going through adolescence, but in many high school movies and TV shows, the main characters tend to spend most of their time in glamorous and unrealistic social settings, leaving little room for the nuanced conflicts that teenagers face in real life. Media should not focus on delivering teen dramas full of exaggerated versions of the reality of high school students. Depicting high schoolers as overly cheery and bubbly—or, conversely, consistently gloomy and downtrodden—are both unrealistic and do not do justice to the teen experience.

The media often illustrates teenage life similar to the saccharine impression that a yearbook gives off, but in reality, the yearbook is a highlight reel of the high school experience and often does not convey the whole story.

“The yearbook portrays high school as people on a very sunny day, smiling arms around their friends, participating and being an active member of some organization,” school psychologist Brittany Stevens said. “There are so many days that are not captured in the yearbook, like the day you’re really sad, worried or left out, and all the feelings that are totally real about high school. So we do a very good job as a society of putting a positive spin on what it means to be a teenager.”

In comparison, shows like “Euphoria” more accurately depict some high school struggles, such as drug abuse, social media, peer pressure and relationships. Many teenagers agree that the emotions the characters in “Euphoria” feel and how they react to them are reflected in their own daily lives. However, like most movies and TV shows centered around high schoolers, there are parts that are unrealistic. While some of these events, such as doing drugs, falling in love and sending nudes can be realistic individually, all of these happening simultaneously makes the show’s depiction of students’ lives overwhelmingly exaggerated. For example, in “Euphoria,” many of these events are connected, taking away from the authenticity of the show. In one instance, Jules, one of the main characters, texts an unknown number that happens to belong to a seemingly sociopathic teenager named Nate. After meeting each other, Nate recognizes her because he had seen recordings of her sleeping with his father. This, along with many other events, are linked in ways that would be highly improbable in real life. The chances of texting an unknown number happening to be someone related to someone Jules knew is already extremely low, and Nate happening to see the recording with Jules, when there were multiple other recordings, is also very improbable.

On the flipside, shows like “Riverdale” and “Grand Army” feature a teenage main character going on an adventure, getting entangled in extreme drama or suddenly having to face the biggest decision they will ever have to make in their life. Teenagers who enter high school with the expectation of experiencing such monumental moments are often left disappointed, feeling as though they are not getting the “true” high school experience.

“Never Have I Ever” is a series that portrays a pretty realistic high school with students attending clubs such as Model United Nations, or having strict parents to create more realistic social scenes. However, while the main character, Devi’s, experiences  are relatable, much of the show revolves around her wanting to date the stereotypical “hot high school jock.” Plots such as this one puts a false emphasis on teenage relationships, when, in reality, they are not even a part of many high school students’ lives.

Similarly, “High School Musical” is a movie series that highlights high school relationships. The plot focuses on the main character Troy, who is a star athlete, and his relationship with Gabriella, a shy and reserved student. Their relationship is a prime example of the typical nerd-jock relationship, wherein two students with opposing characteristics get together. Much of the conflict in the movie comes from the blonde, popular student, Sharpay, trying to steal Troy away from Gabriella. All three movies revolve around these high school relationships, creating the illusion of relationships being the forefront of students’ lives. A study from Child Trends has shown that over the past 40 years, the number of seniors who avoid dating has increased by over three times, from 15% in 1976, to 49% in 2017. Many high schoolers, who are already weighed down by classwork and extracurricular activities, may push themselves to enter a relationship for the “normal” high school experience. The pressure to form premature relationships may lead to teens involved to feel emotionally overwhelmed.

However, as most students are unaware of such findings, they only realize that they cannot live the glamorous life they see on screen after entering high school themselves. Most of what students experience, such as daily studying, homework struggles, stressful deadlines and late-night work, is omitted because it is deemed too mundane for entertainment. However, not being able to relate to the teens on screen often leave high schoolers frustrated and confused.

“In high school, there is more commitment and more studying,” freshman Peter Aguirre said. “I wish that there were more realistic portrayals of the amount of time that people take to study and the stress from schoolwork and peer pressure that aren’t always shown in movies or TV shows.”

Many Lynbrook students spend their spare time at home or in the library finishing homework and studying, leaving little time for them to engage in social activities. This contrasts starkly with the high school life portrayed in TV shows and movies, where the students usually spend more time out partying or shopping.

“You realize that high school isn’t always about having fun and there are times that you have to be serious if you want to have a future that you picture,” freshman Hana Khan said.

Furthermore, some students enter high schools with unrealistic expectations for their peers and themselves, specifically about appearances. Since nearly all the actors who play teenagers on screen are fully grown adults in real life, high school students who compare their appearances to those of the “teens” on screen might feel inferior.

“Having adults play teenage roles can be problematic since these 20-somethings are more fully developed and have less of the frustrating hormonal changes of adolescence,” Stevens said. “Some examples are that teenagers’ bodies maybe grow at different rates, so it doesn’t look symmetrical, or they have issues with their skin, since you’re not fully developed in a lot of ways.”

While these experiences are normal in teenagers, some students may experience body dysmorphia due to the disconnect between their reality and the teenage image depicted in the media. Body dysmorphic disorder, or body dysmorphia, is a mental disorder where a person hyper-focuses on perceived flaws in their appearance. Shows like “Riverdale,” which mainly feature conventionally attractive adult actors playing successful and popular teenagers, feeds into the feeling of an average teenager not being enough. In the show, the main characters that receive the most screen time are the “attractive” ones, while the characters without the conventionally ideal body types, such as Ethel Muggs, are bullied and need the main characters’ help. Story lines such as these, where all body types other than the conventionally attractive ones are on the sidelines, can cause teenagers to feel more self-conscious about their own body.

Other types of mental disorders, such as depression or suicide, have been glorified in TV shows such as “13 Reasons Why,” which only twists teenagers’ views of their society and school even more. This show focuses on Hannah, a teenage girl, who takes her own life. She leaves behind tapes and because of the situation, suddenly people start to care about her. Depicting suicide as an action that brings acknowledgement, escape and revenge is not only unrealistic, but also dangerous. People who feel overwhelmed but are not confident in seeking for help might watch such shows and believe that suicide is a solution to problems such as social isolation or fear of failure.

Many teenagers enter high school only to find out that the high school life they envisioned, built from media portrayal, is nothing but a distant fantasy. Shows like “Never Have I Ever,” while still problematic due to their slightly exaggerated depiction of the high school experience, are a step in the right direction towards a more realistic depiction of high school in the media.