The mute button: A curse in disguise 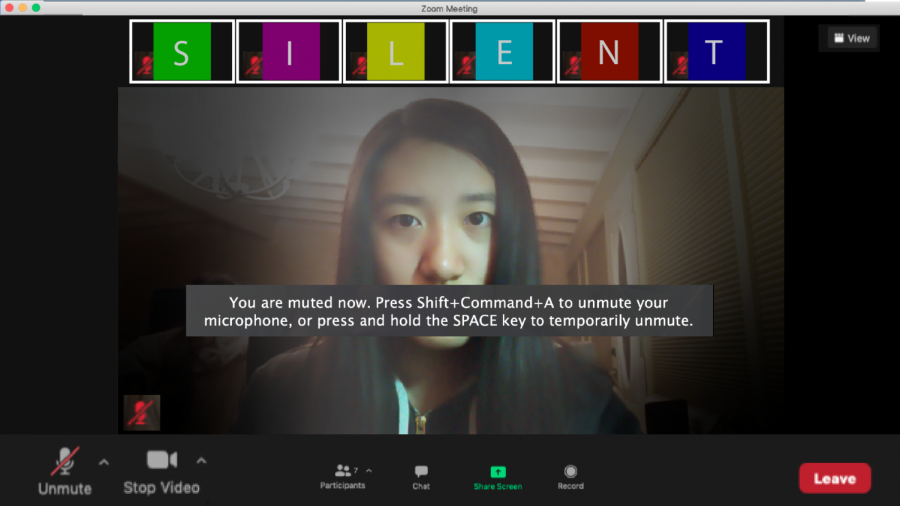 With the mute button in a Zoom meeting, I have allowed myself to fall in the trap of hiding behind my screen and staying silent.

Intended to instill fear in those who speak rashly, these words have taught me a lesson: stay quiet unless it is absolutely necessary to speak.

Enter 2020, where online communication platforms have replaced in person conversations. With this transition, I have obtained what I believed I had long wished for: a mute button that allows nothing to pass through, as long as I leave it untouched. With the mute button, there are no mistakes, no slip ups. Just the pure, unadulterated silence that I desired. Or so I thought.

As time has progressed, however, I’ve realized that the mute button had its own negative consequences: I began to find comfort in my silence even when speaking was the correct choice.

Throughout the years, I’ve gradually found new ways to reach people via the growing realm of online communication. I had envisioned this added convenience as something that would spark a new era of communication, but I inadvertently took sanctuary in hiding behind a screen. It was not until the pandemic took away all forms of in-person conversation that I noticed how silent I had become, even with online communication in my life.

After nine months of shelter-in-place, it has become instinct for me to turn off my microphone with a swift click at the beginning of each class. My eyes frequently dart to the bottom left corner of the screen to make sure that the microphone is adorned with its familiar red sash. When the teacher announces breakout rooms, I feel myself tense, knowing that I will have to endure the awkward experience of unmuting myself amidst a group I am unfamiliar with. When the teacher calls on me to speak, I find myself fearfully eyeing the absence of the red slash, knowing that the entire class’s eyes will be on me as I give an uncertain answer. I realize that I am afraid to unmute and ask questions in class even when I am confused, as the entire class will hear my call for help and may silently judge me. Especially when the majority of the class can conceal their faces with their cameras off, I feel alone in my struggles because I cannot pick up on the social cues of confusion as I would have in normal circumstances.

My impression of a classroom has transformed from a brewing pot of knowledge to an instigator of fear and uncertainty. Sometimes, I look back at myself and ask, how had I evolved from the small girl who would eagerly greet every stranger to the soon-to-be adult that shirked social interactions? How did I end up in this dire state of silence?

I later discovered through self-reflection that the mute button was merely the newest addition to the long list of experiences that have silenced me. My first encounter with the consequences of impulsive speaking occurred in seventh grade, when I became the only returning volleyball player that did not make the cut for the team. My overwhelming embarrassment and dejection influenced me to lash out in an email directly addressed to the team. Although I was already in the lower tier of my grade in terms of talent, I complained about how the coach chose team members based on position and not skill. Eventually, I realized how immature I was with a scolding from my parents and some self-reflection. Although I wrote an apology email to my teammates and cheered them on in games to prove my sincerity, I knew that this wrong step could be used against me anytime to destroy my reputation outside of the volleyball circle. With this experience, I became much more reserved both in person and on social media in fear that I would commit the same mistake again.

The Asian culture that I was raised in has also shaped me into becoming more reserved. From a young age, I was taught to respect those around me by listening quietly and intently. I was taught by the words of Confucius that “humility is the solid foundation of all virtues” and that “a superior man is modest in his speech but exceeds in his actions.” While all of these values are qualities worth having, I wrongly interpreted all of these life lessons as a mandate of silence. Even when I strongly disagreed with an opinion voiced by those around me, I embraced the state of quietness to avoid the risk of bringing negative attention to myself. One could think humbly of oneself and still voice their opinion, but I impulsively chose total silence.

I have let all of these factors accumulate in me for eighteen years of my life, but the addition of the mute button has become the last straw. It is only this year that I have realized that I need to change. We need to change.

While previously believing that technology would help us connect with more people and bring out our voices, in reality, many, like myself, have fallen into a trap of silence. Despite this, the obstacles that we currently face are not an excuse for us to fade into nonexistence and isolation. In the midst of a pandemic, I have found my voice, writing this column through the Epic. Through the small act of unmuting yourself whenever possible, you can too.