Get me a manager: The history of Karens 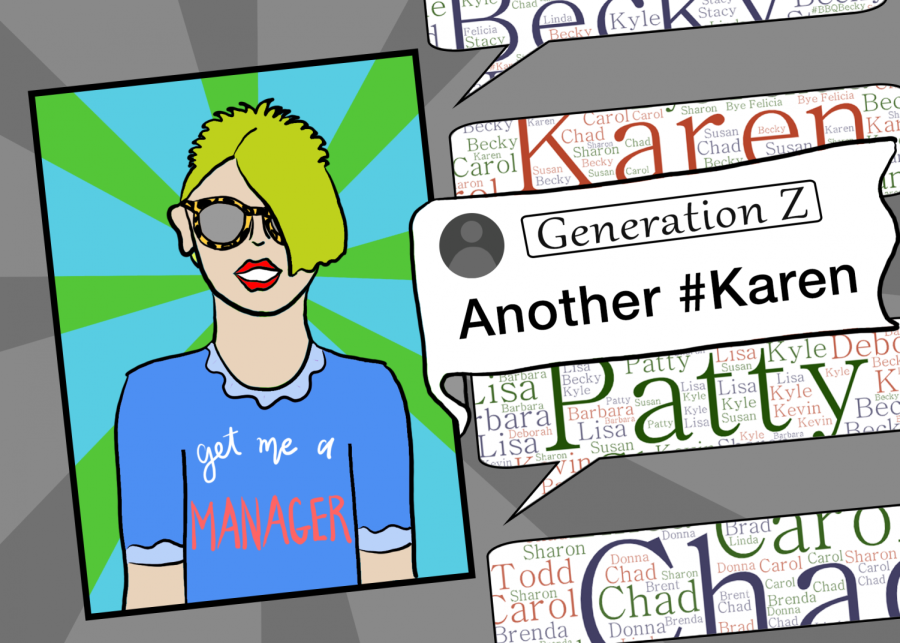 The Karen meme and similar names have become commonplace on many social media sites.

The ever-evolving lexicon of Gen Z has recently expanded to encompass a new slang term: Karen. Wielded by youths as an insult that predominantly targets older generations, Karen and similar buzzworthy names have developed connotations beyond simple first names. But why have these particular names become the epitome of Gen Z stereotypes?

Perhaps the most recognized of these names is Karen. The Karens of society are portrayed as snobby white middle-aged women who embody white privilege, having a blonde, bob hairstyle and toting the catchphrase “let me speak to the manager.” Tracing the name back to its roots, Karen peaked in popularity in the 1960s, becoming the third most popular name for baby girls in 1965. The name’s popularity has since ebbed down, so today’s Karens are likely to be middle-aged Gen Xers. With the popularity of the name already in constant decline, it is likely—to some extent—that the newfound meaning of Karen has tarnished its reputation even further. Karen was not widely associated with its current stereotype until the 2010s, but some earlier films with characters named Karen may have enforced such views.

The first is the 1990 movie Goodfellas—the critically acclaimed Best Picture nominee features an amateur Mafioso’s venture onto the criminal stage. The plot is based on Henry and Karen Hill, real mafia-involved New Yorkers. Karen marries Henry against the wishes of her parents after seeing the luxury that could come from criminal activity. Goodfellas portrays Karen through a batty, maniacal lens, with one scene even depicting her pointing a firearm at her husband with an unsettlingly calm demeanor. When finding out Henry has a mistress, Karen decides to harass the other woman. She smashes the intercom buttons of the apartment while yelling hateful slurs and calls the apartment owner, angrily asking, “Is this the superintendent?” The movie’s success spread its theater presence, and consequently the portrayal of ‘Karens’ as irascible and disparaging, across America.

Another film, Mean Girls, debuted in 2004, and is centered around the life of high school student Cady Heron and her new school’s social cliques. In particular, the Plastics are a triad of the school’s most infamous girls, one of whom is Karen Smith. The blonde is simpleminded, and although she isn’t particularly mean, as the movie title suggests, she is impressionable and academically challenged. A popularly referenced line from the movie is one of the “mean girls” saying to Karen, “Oh my god, Karen, you can’t just ask people if they’re white,” a testament to her cluelessness. Mean Girls was, and still is, well-known, especially with the release of a sequel in 2011 and a broadway adaptation in 2018, incidentally perpetuating the “dumb blonde” trope.

Possibly the most popular recording when referring to the origins of Karen is Dane Cook’s 2005 comedy sketch, “The Friend That Nobody Likes.” In the sketch, Karen is given as an example of the titular unwanted friend, with Cook saying, “Every group has a Karen, and she’s always a bag of douche.”

Though these disparaging characterizations of Karen are quite pronounced, the use of Karen as a stereotype did not gain serious traction until 2017, through a Reddit user’s online rant. The original post ridiculed the user’s supposed ex-wife Karen, who had taken their children and house after the divorce. This stereotype was reinforced in 2018, when the late esteemed actor Chadwick Boseman went on Saturday Night Live for a comedy sketch called “Black Jeopardy.” The sketch jokingly describes a situation in which a friend, Karen, brings her homemade potato salad to a cookout. In an offhand manner, Boseman states that Karen probably does not salt her food and insults the potato salad as bland and basic.

The use of the name in a derisive nature truly became prevalent in May 2020 due to a widely reported Central Park incident. Amy Cooper, a white woman walking her dog in Central Park, called the police on Christian Cooper, a black man with no relation to the former Cooper, who happened to be in the park at the same time to birdwatch. Both parties filmed the proceedings, and their recordings became a viral sensation online. Angry viewers scorned Amy Cooper for victimizing herself and making a racially motivated 911 call. Social media took to calling Amy Cooper the Central Park Karen, along with its respective hashtag.

The Karen meme has even penetrated local governments. San Francisco’s Caution Against Racially Exploitative Non-Emergencies (CAREN) Act, intentionally named after the Karen stereotype, was passed on Oct. 20 by its Board of Supervisors, which criminalizes race-based 911 calls with a punishment of hefty fines.

Though the Karen label has mainly been used toward white women, there have been instances of its use towards males and people of color. Regardless of gender or ethnicity, the name describes frowned-upon displays of privilege and conceitedness.

Its use has grown understandably contentious, especially from those who are named Karen or are part of the older generation. Some people have called the name a slur or term of abuse, as well as framing Karen as a racist expletive for white people. Others dispute that those who oppose the naming act in a similar vein as Karens and are taking offense at a superficial issue. They point to other derogatory terms such as the N-word, deeply rooted in history and our society, that have done more harm than the name Karen.

There are also other concerns regarding the accuracy of the stereotype. A New York Times poll found that in the 2020 election, 60% of Karens preferred Biden, who was more interested in addressing systemic racism than his opponent, suggesting that the insinuations associated with the name may not hold water all too well.

Though ‘a Karen’ may not be the most accurate terminology, other names, such as Miss Ann and Mister Charlie, circulated the African American community even before it came to describe white privilege. During the 19th century, an era of discrimination and oppressive segregation, Miss Ann and Mister Charlie described white owners of slaves or arrogant white people who held feelings of superiority toward the Black community. These precursors to Karen have even inspired songs, such as “Mr. Charlie” by Grateful Dead. Embedded in the lyrics are references to African American culture and the street slang they used. No matter the age, racial injustice still persists, as does the use of epithets to describe the oppressors.

Other names such as Becky, Felicia and Chad, though not as prominent, also refer to a specific group of people. Beckys are women who are “basic,” dim-witted and put a large emphasis on appearance. The label arose from a line in the song “Baby Got Back” by Sir Mix-a-Lot, in which a woman addresses a Becky and belittles the looks of another woman.

Chad, one of the few names describing the male population, depicts an affluent, attractive man similar to a stereotypical jock or male model. Chad is said to have been a slang in ‘90s Chicago and climbed the ladder of youth pop culture when referenced in the fake satirical club Lincoln Park Chad Society.

Felicia is most commonly used in the phrase “Bye, Felicia,” which isn’t so much a stereotype as it is a quip to dismiss or turn away someone in a condescending manner. It is a quote from the 1995 movie “Friday,” and the saying quickly rose in popularity after that particular scene was posted on YouTube in 2007.

The rise of Karen and other names to represent entitlement and other negative stereotypes is largely coincidental, yet, no matter their origins, these names developed in response to a divided nation. Though the new meaning of “Karen” is met with some controversy, its extensive online presence has contributed to greater awareness of racial and social issues, especially resonating with the younger generation.