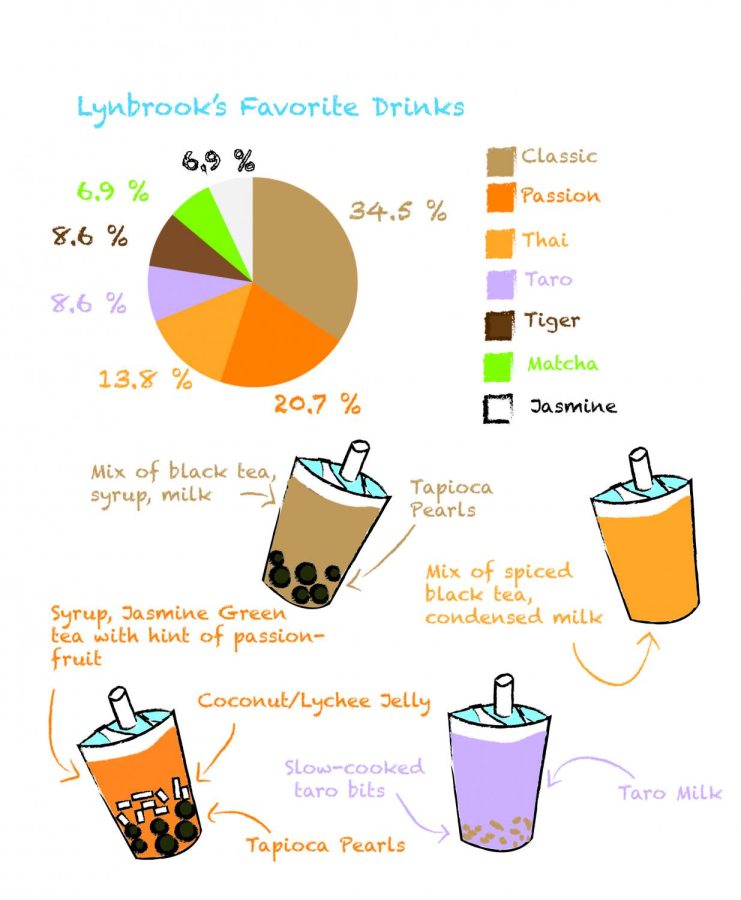 For this review, two Epic staff members decided to try classic pearl milk tea, a fruit-flavored tea drink, thai milk tea and taro milk tea, the most popular drinks based on the results of a student survey. We both sampled the classic milk tea and passion fruit tea, then each picked a third drink to try separately.

Melissa: I had never really enjoyed herbal tea, like green tea and chamomile tea, but milk tea was a pleasant experience — well, for the most part. I tried my first milk tea drink in freshman year. In marching band, we had a summer sleepover, and to pass the spare time, my friend and I walked from Lynbrook to TeaTop. Neither of us had tried any of the drinks before, but my friend ordered an Earl Grey tea. We both took a sip and immediately grimaced at the bitterness, realizing we had forgotten to request sugar.  Later that week, my brother insisted we try another drink, and we decided on the classic black milk tea with pearls. This, I enjoyed. When I discover a dish I like in a restaurant, I tend to order it every time I return. This has been the case for classic pearl milk tea until now, but I’m excited to discover a new favorite.

Sharlene: The only two drinks I ever order at shops are the classic black milk tea with pearls and various fruit teas. It’s a bit scary trying something new. I dislike overly sweet drinks and icy drinks, so my go-to order at shops always has 50 percent sugar and no ice. I love all types of tea, much more than coffee, and I never understand when people complain that tea is bitter.

For classic milk tea, we ordered the drink from the store Gong Cha. Senior and boba enthusiast Flora Huang recommended this store, citing it as the store with the best-tasting milk, so we decided that it was a good choice for our taste test of classic milk tea.

Sharlene: The tea and milk were combined flawlessly with the best milk-to-tea ratio, creating the perfect balance of flavors. I could drink it forever and not get sick of the taste. As usual, I got 50 percent sugar and it was perfectly sweetened to my liking. Gong Cha is probably my favorite shop for classic milk tea now! The pearls were a little hard and not chewy enough, which took away from the overall taste, though this may just be a one-time issue.

Melissa: I ordered 50 percent sugar and no ice, as usual. The boba went well with the milkiness of the tea, and neither flavor overpowered the other. This drink is definitely a classic. I think that out of all of these, classic pearl milk tea may be the safest to try first since it doesn’t have any strong or unfamiliar flavors.

For fruit flavored teas, we ordered the Passion Green Tea Medley from TeaTop, one of the most popular stores among Lynbrook students. This drink is composed of a passion fruit green tea base with boba and lychee jelly.

Sharlene: The passion fruit flavor has a bit of dry, bitter aftertaste that complements the sweetness of the drink well and encourages me to keep drinking. The drink is also nice in that it is not too costly and it comes with two toppings. The lychee jelly and tapioca pearls add a nice chewy element to the drink and enhance the overall flavor. It’s excellent for hot summer days, one of the reasons that it has been a long-time favorite of mine, and I love how it soothes my throat.

Melissa: Out of all the drinks we were going to try, this was the one for which I had the least expectations, since I prefer milky and creamy tea. I was definitely interested to try it, though. For the first sip, the tea tasted a lot like juice. The tea flavor was fainter than I expected but a little stronger in the aftertaste, with a slight bitterness that was actually very helpful in balancing out the sweetness. I enjoyed the slight contrast in texture between the lychee jelly and tapioca pearls. They were both slightly chewy, though the lychee jelly was firmer than the tapioca pearls. This fruity tea highlighted the sweetness of the boba more than milk tea. The lychee and tea went well together, but I preferred eating the boba separately. The drink was still great on the chilly day I tried it, and I imagine it would be a perfect thirst-quencher during a hot day in the summer. Overall, it was a satisfying drink, but the medley between the different elements was not as cohesive as in the classic milk tea.

Sharlene ordered thai milk tea from Ten Ren, a shop known for having very authentic and strong-tasting tea, since originally they had sold tea before converting into a boba shop. Thai milk tea is a bright orange, creamy drink made with strong black tea and sometimes a handful of spices along with condensed milk. Some stores include pearls in the drink, while others do not.

Sharlene: This was the first time I ever tried thai milk tea, and although it was not exactly my favorite, it tasted pretty unique. There was a slight dry feeling that clung to my teeth after a sip, but it was washed over with the creamy, distinct flavor of condensed milk. I did not order pearls to go with the drink, and when I requested half sugar, the employee informed me they could not do that, since it was made with condensed milk. As a result, it was a bit too sweet for my liking, but still delicious. Ten Ren did a great job of mixing the tea and milk evenly, resulting in the drink having a smooth texture.

Melissa ordered taro milk tea from Teaspoon. Taro milk tea, as its name suggests, features the often white or slightly purple-fleshed root vegetable taro, which was originally cultivated in Asia and is commonly used in Chinese and other Asian cuisines. Though sometimes referred to as “taro milk tea,” the “Taro Lover” drink from Teaspoon does not actually contain tea. It is composed instead of taro milk, with the optional addition of slow-cooked taro chunks, which comes with the drink.

Melissa: At Teaspoon, for each additional topping added to the drink, you have to pay 60 cents. To get the full experience with the taro milk tea, which I had also never tried before, I decided to get it without boba. I did opt for the slow-cooked taro, though. A lot of my expectations were proven false. I thought the taro chunks would be much larger, but it was actually more of a dust, which I realized made more sense. Large pieces would be difficult to drink through the straw, which was actually reusable, and taste odder with the drink. The taro “bits” tasted like miniscule pieces of stringy potato, and most melted in the mouth. From my previous experiences with taro, I thought the drink would be thicker, but the milk was actually the exact same texture and thinness as classic pearl milk tea. The taro milk was very sweet. I liked it because I have a sweet tooth, but those who prefer less sweetness might want to reconsider before ordering this drink, as the sugar level is pre-set.  The flavor itself was strongly fragrant, though it didn’t have a very strong taro taste.  On the contrary, it was more milky, and comparable to a rich vanilla ice cream shake.

Melissa: This was a fun experience, and in the future I definitely want to continue trying new drinks. There’s a lot out there yet to explore, from salted cheese drinks to avocado chunks to peach marmalade.

Sharlene: It was definitely exciting to try out these drinks from different stores instead of sticking to the same old orders, but my favorite drinks remain the same. In the future, I will still experiment with new combinations, as there are still so many toppings and flavors I have never tried before!