Social media: Is it worth the risks? 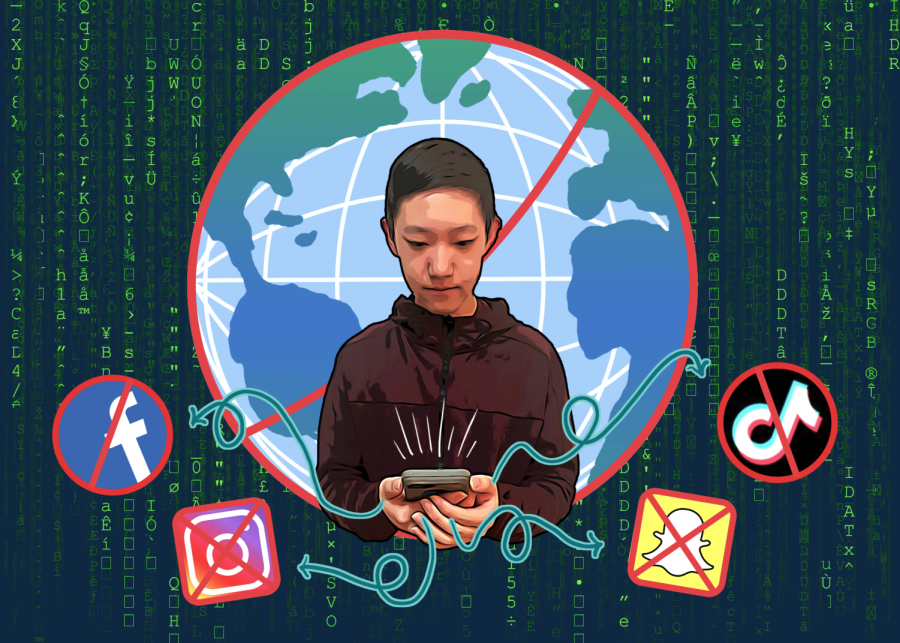 My paranoia of leaving a carbon footprint has kept me from posting on social media.

In the age of social media, teenagers are stereotyped as heads-down, hoods-up, twiddling their thumbs over the screens in their hands. In part, this does stem from the truth — social media has consumed the attention of its young user base. As new platforms arise year after year, teens may abstain from constantly creating new accounts; however, my urge to avoid social media is not due to a dislike for repeatedly setting up new profiles, but due to my paranoia of leaving a digital footprint.

In middle school, I attended a media class. As a sixth grader with no phone, I did not believe the class would carry many implications for me, but one lesson stuck with me all the way to high school: I learned that the best way to preclude future social media regrets is to steer clear from social media altogether.

I treat this statement as the golden rule for being online, especially when hearing recounts of social media “horror stories.” For instance, posts of inappropriate photos have been used in court as incriminating evidence against teens who were cyberbullied online. The malicious actions of these teenagers, as well as anyone who uses the internet, can not be erased. These posts end up accumulating into an online portfolio for future employers and recruiters to see.

I understand the appeal of social media, but am afraid of its permanence; all the data I put online, stays online forever. Knowing that the digital footprints I leave will forever be imprinted upon the digital world dissuades me from posting on social media. If what I leave on my social media account is to be a part of me indefinitely, I would rather wait until I am mature enough to understand the consequences.

Going online, my right to privacy isn’t guaranteed. Even the most minuscule actions, such as changing my username or liking a post, are broadcasted to my friends and family through notifications. Additionally, cryptosecurity is not foolproof, and the data collected by large tech companies can still be leaked — and has been on many occasions.

When I was younger, my friends and I dreamt of becoming famous YouTubers. We created a YouTube account and taped short, original skits about horror, sports and other silly topics that we thought were hilarious at the time. When recording the videos, my friends offered me roles in front of the camera, but I always preferred to do the backstage work. This could come in the form of standing on the window sill, holding the curtains together to block out light in order to simulate nighttime or helping to find free, over-the-top sound effects to add into our final product. I was more satisfied watching my friends and their exaggerated acting than doing it myself.

Even then, I held a paranoia of revealing any part of myself online. Sometimes I look back on the many videos that are still online and bury my face in embarrassment, grateful that I had the prudence to shy away from the spotlight. However, in my naivety, I broke my golden rule: I put my first name in the description of certain videos.

With how much I have criticized social media, it feels shameful to say that I do have a social media account. Someone recommended that I install Facebook over the summer before my freshman year. Though I was originally opposed to the idea, I relented to stay informed with different school groups. Despite creating an account, I have yet to post, like, comment or share any content. My aforementioned golden rule still applies, even in cases when I know that posting content will not have adverse effects.

Every so often, I am asked to make a post about a group I am involved in and promote an event. For example, my Journalism class was asked to put promotional pictures on social media for the Epic’s first issue. As I went on Messenger, I saw the small circles of other students’ profile pictures all displaying the same message: to check out the Epic’s website. Every text I opened up was a reminder of my inaction. Although I felt slightly guilty, I refrained from doing any promotion, worried that if I start, my line between what I should and shouldn’t post will become blurred. I only use social media to text friends and family. Though I am still leaving a digital trace, it is not as open to the public and future employers are not privy to this information.

I don’t feel lacking in any way without social media, and I am content to leave things as they are for now.  Right now, the cons of social media outweigh the pros, but maybe someday I’ll find the courage to step out of my comfort zone and share my thoughts online.