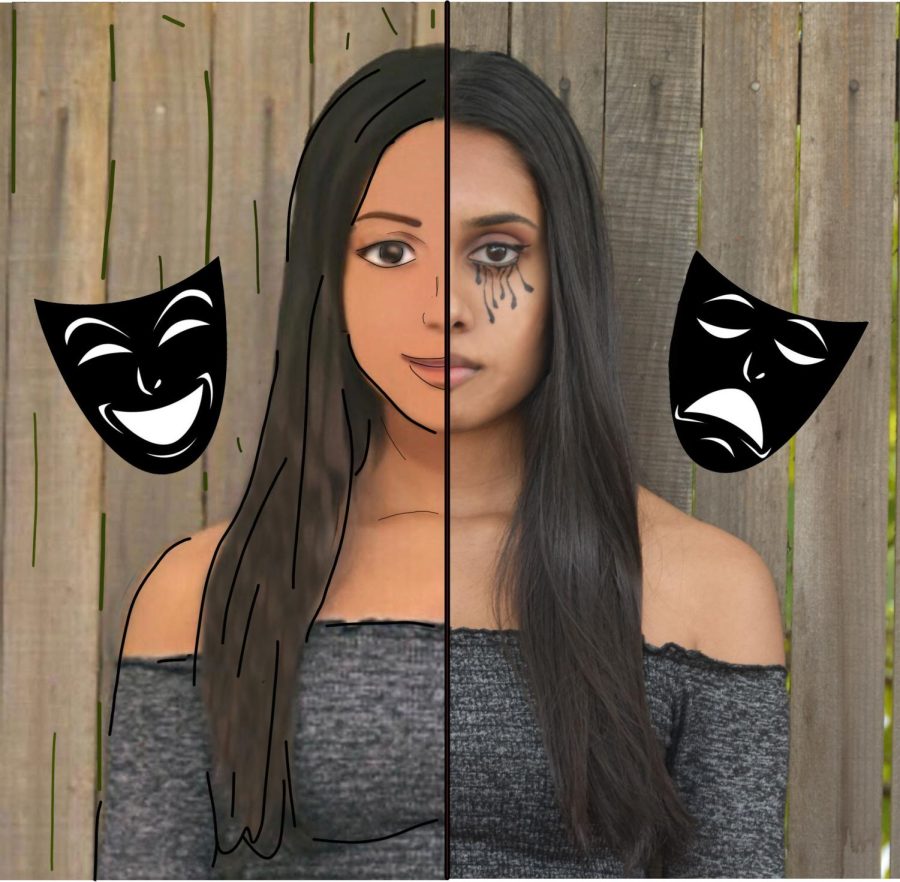 My version of happiness had been superficial and one dimensional, but I’ve come to recognize that genuine happiness can’t exist without an understanding of other emotions as well.

I stared at myself in the mirror, ashamed of the ashy-grey tear stains on my cheeks. In the safety of the empty school bathroom, I splashed cold water on my face to erase any evidence of the smudges and applied a fresh coat of mascara. My transformation was almost complete. I smiled at my reflection and the mask fell back into place, just in time for me to give a cheerful hello to an acquaintance who had just walked in.

I had been pretending for so long that the distinction between myself and my mask was beginning to blur. Just under this sunny exterior, a hurricane of pent-up emotions and thoughts had been taunting me for years.

What was wrong with me? Why was I losing control? Why couldn’t I just be normal?

I knew it was only a matter of time before everything erupted again. Still, I desperately struggled to keep my mask in place, not willing to let go of what I believed defined me — my positivity.

Even though he was barely three years old, my brother was far more outgoing than my reserved six-year-old self. While I meekly observed the surroundings from the safety of my parents’ shadows, my brother eagerly introduced himself to every guest that entered our house and quickly initiated conversations that left others laughing. The polite smiles I received for the few words I managed to squeak out paled in comparison. I was frustrated. I wanted to be more like him. I began pushing myself to be more outgoing, and eventually it started working. What had started as an act was now beginning to become my reality.

The issue wasn’t with me opening up — on the contrary, that allowed me to develop a renewed sense of confidence in projecting myself. The problem was that I associated this attitude with always maintaining a happy image because I believed that presenting any other face would destroy my social image. This was the beginning of my decision to bottle up every other emotion, and it lasted for four years before thin cracks began breaking my facade.

Looking back, it is easy to identify my attitude as one of toxic positivity. I embodied the concept wholeheartedly: to me, the “right” way to live was to exclusively feel happiness. My main personality trait was being energetic and bubbly all the time — there was no depth to my character. Since I was always the “positive” one, people always came to me for advice or support, but I never expressed any of my own issues. I was left isolated.

It felt as though nobody wanted to listen, but in reality, it was just my inability to accept my feelings that prevented me from confiding in anyone else. I had spent years invalidating my own feelings and experiences. While I believed I had moved past them, they were only temporarily repressed, lurking just beneath the surface, ready to shatter my ever-weakening mask.

At first, I refused to acknowledge that I was no longer able to hold everything in. I tried to distract myself by throwing myself into schoolwork and extracurricular activities. It wasn’t enough. When I felt my mask slipping, I would retreat into isolation, desperately attempting to tug it back into place before venturing back out, but my efforts only aggravated the situation further. Eventually, this vicious cycle culminated in one major break-down.

I couldn’t hide everything anymore. Simply put, I was mentally and physically exhausted. As I began showing more of my negative emotions, I did lose a lot of people that didn’t know how to react to this “new” version of myself — but I don’t hold any grudges against them. We are never really taught how to deal with our real, raw emotions, so it makes sense that they were uncomfortable. Regardless, I realized that if I vocalized my struggles and their response was dismissive, it only reflected on their lack of ability to provide support, not the validity of my experience.

That “happy girl” is still part of my personality, and she probably always will be. I’m still the girl that cackles loudly and gets excited over little things and is there to listen and support anyone who needs me. But she isn’t the only part of my personality. I realize now that my understanding of positivity was a prison because I refused to let myself understand any other state of existence.

I am human, and I’ve come to recognize that genuine happiness can’t exist without an understanding of other emotions, including sadness, anger and frustration — the “ugly” side of human nature that we’re often told to hide. It’s beneficial to see the good as much as possible, but there’s no point in forcing it. It’s never worth suppressing your feelings to create an illusion of positivity.

To anyone that may be going through something similar: feel whatever you’re feeling without shame. Your feelings are valid, and I promise you, it really is okay to not be okay.