Idolizing politicians: The destruction of democracy 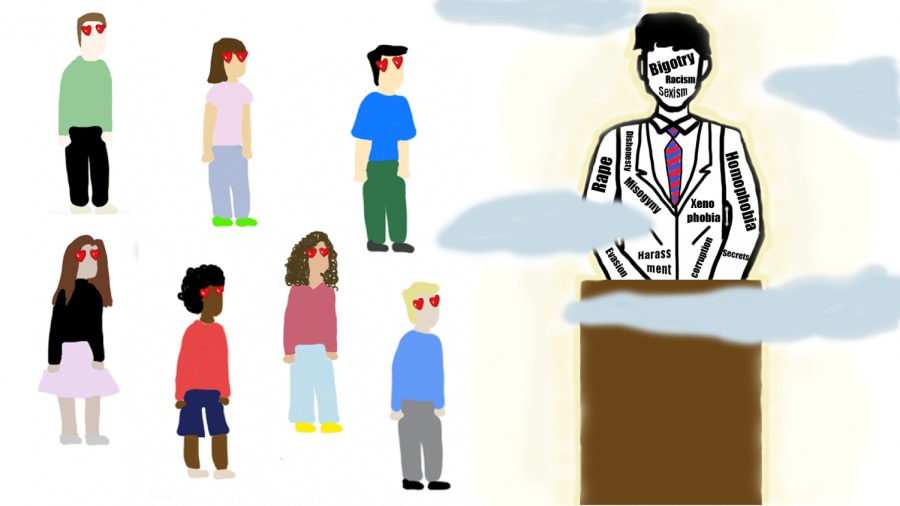 A crowd stares adoringly at a godlike politician with horrible qualities.

Throughout history, idolizing major political figures and parties has led countries down paths of destruction and dictatorship. In the most extreme example, as Adolf Hitler rose to prominence in Nazi Germany, common citizens and supporters began to see him as a god, cleansing their world of so-called “sins.” Viewing humans as any more than what they are — mortal and flawed — gives them inordinate power and far too much control over the public. Particularly in 2020, the public’s perception of politicians’ power has become heavily slanted.  Their power is meant to be kept in check by people who are able to see the flaws in every party and politician; people who are hard to find nowadays.

Politicians are fundamentally actors who share and hide what they want, and the result of trusting these actors can be incredibly damaging to both society and the individual. When placing faith in a politician’s character, the least damaging outcome one can hope for is a few resurfaced controversial tweets. But the other end of the spectrum can include serious rape allegations and white supremacist ideologies.

President Donald Trump seems to see himself as the stereotypical “white-man savior” of America, which is evident even in his 2016 campaign slogan, “Make America Great Again”. This widely-known phrase suggests that Trump is the single person who can restore, or save America. This sentiment has been enforced through his word choice in his many speeches and tweets. Within the same campaign, he has taken responsibility for positive change in America and has vowed to single-handedly fix all the negative aspects.

“I alone can fix it,” “I am your voice” and “I will restore law and order” are all direct quotes from Trump’s past speeches. The word “I” completely changes the meaning of what the President is communicating, giving him sole credit for fulfilling  the people’s wishes.

Some of his tweets make questionable claims, such as taking responsibility for the additional 3.7 million jobs created since his election. This statement is quite obviously a lie given that it’s impossible for one person, however powerful, to turn the economy around. To attribute the increases in jobs to a single person rather than the myriad of different factors involved is a blatant exaggeration.

Trump credits himself for improving the economy and general health of America, a position that is evocative of dictators. Supporters have lapped up these brash displays of power, as part of Trump’s appeal is his American pride and unprecedented audacity. But these constant, somewhat subliminal messages have slowly molded Americans’ perception of the president into an almighty and godlike presence. At campaign rallies, Trump supporters have been known to hold signs connecting him with words like “savior”, and “God”, seeming to fervently worship him. Examples of this idolization have been shown through history at the first stirrings of fascist leadership.

Trump’s cult-like following is reminiscent of other fascist leaders, such as Jair Bolsonaro, the current President of Brazil. Similar to Trump, he has painted himself as a savior by using the religious fervor of his country and calling his campaign “a mission of God.” Both Bolsonaro and Trump have used Christianity as a rope to originally grab at voters and appeal to their religious  identities.

“I will be the greatest jobs president that God ever created,” Trump said during a 2016 campaign speech, furthermore emphasizing this religious connection.

Additionally, when in the face of controversies, such as Bolsonaro’s defense of physical punishment for the LGBTQ+ community and Trump’s disapproval of same-sex marriage, they use religion for justification.

This idolization and admiration come in both right and left-wing politics. Many skeptical Joe Biden supporters have recently begun to see Vice Presidential candidate Kamala Harris in a more positive light. Especially as a result of the disastrous presidential debate in late September, voters have been conditioned to expect a lower standard in debates.

In the first presidential debate, Trump talked over both the moderator and Biden multiple times. On the contrary, Harris was able to retain power over the vice presidential debate to some extent, using calm, correcting statements.

“Mr. Vice President, I’m speaking,” is one example of these statements that Harris repeated throughout the debate. This caused both her previous supporters and new voters to gain more respect for her.

“I supported her back when she was running for Senate and I can see that she’s really grown and done so much,” said senior Zoe Parkhomovsky. “The debate was amazing but I’ve been following her for a while.”

Although personal change in pursuit of becoming a better person is positive, politicians often tend to “grow” solely in pursuit of popularity. Kamala Harris’ rocky past as a San Francisco attorney shows her intentional adaptation to the image that she believed would appeal to the largest population of voters. Part of the Biden Harris campaign includes the decriminalization of marijuana, agreeing that nobody should be in jail for neither use nor possession. Yet, in 2010, Harris opposed Prop 19, which would legalize adult use of marijuana. She instead pushed maximum sentences for marijuana possession, imprisoning more than 1870 people for pot offenses from 2011 to 2016; an action mainly targeting young people of color.

“Right now in this country people are being arrested, being prosecuted, and end up spending time in jail or prison all because of their use of a drug that otherwise should be considered legal,” Harris said in 2018, directly contradicting her original position.

She has also expressed opinions on truancy, the war in Syria and the prison labor pool, all of which differ from the current Biden-Harris policies. This is not necessarily a reflection on her as a person, but instead on politics as a whole. Politicians are nothing but actors, playing the part necessary for them to gain the most votes. Although there’s nothing wrong with voting for a presidential candidate with a controversial past, problems arise when a vote turns into idolization and hero-worship. It’s also crucial to ensure that politicians with a bad history have taken the necessary steps to improve — ignoring the past doesn’t change it. But the basis of elections are current problems, not past controversy. Agreeing with policies is different from completely agreeing with politicians, and it separates the actions of the person performing them.

“I feel it’s the most important to be able to criticize both political parties and politicians — it allows you to do what’s best for your country and prevents idolization,”  said sophomore Serena Kher.

Total idolization consists of the blind trust in everything someone says, which is incredibly controversial in a climate of actors and politics.

Placing blind trust in politicians is detrimental and sets one up for betrayal, given their acting and instances of fraud Both current presidential candidates have numerous sexual assault allegations and racist histories. Most of Biden’s votes are based on the idea that although neither candidate is perfect, he’s simply a somewhat better choice. In his past, Biden has pushed hard for segregation in schools and enforced the Clinton Crime Bill and the Anti-Drug Abuse Act of 1986, imprisoning hundreds of young people of color. In comparison, President Trump refused to condemn white supremacy in multiple circumstances and has had many offenses concerning indigenous peoples. He’s also repeatedly suggested the death penalty for the Central Park Five despite their innocent verdict. The entirety of his 2016 campaign was built on keeping Mexican “rapists” and Muslim “terrorists” out of America.

“Biden has done racist things in his past but doesn’t plan on implementing similar policies; Trump’s campaign is based on racist practices,” Kher said, reflecting the popular sentiment of “Settle for Biden”.

Idolizing political candidates results in the endorsement of all their behavior; both the positive and negative. Voting requires an understanding of a candidate’s policies, and as such, votes should be purely policy based.  People need to stop voting on the basis of admiration and idolization — it’s the only way to save America’s democracy.