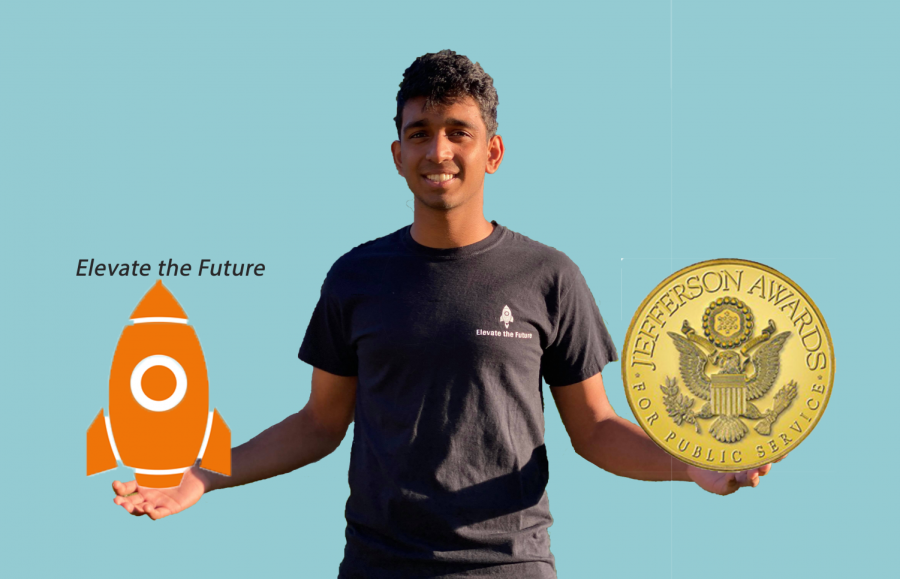 Arjun Gupta’s nonprofit organization, Elevate the Future, has led to him earning the Jefferson Award.

Shelter-in-place orders during the COVID-19 pandemic have led to an increase in the number of youth and adult volunteers contributing to the community. Senior Arjun Gupta has taken this opportunity to expand the scope of work for his non-profit organization, Elevate the Future, by building a web presence for many struggling small businesses and helping them gain e-commerce platforms, which allows them to sustain their customer base as well as finances.

Two years ago in 2018, Gupta and co-founder Ryan Garg, a student from Archbishop Mitty, started the organization with the goal of increasing student exposure to topics such as business and computer science, which are not offered in elementary and middle schools.

“It just started off with the realization that there was something wrong with our education system and that students at a young age weren’t being exposed to topics that are really critical to them,” Gupta said.

In June 2019, Gupta started to recruit volunteers through social media platforms such as LinkedIn. He contacted many of his friends, inviting them to join and help spread the word.

“LinkedIn and word of mouth was really powerful for us,” Gupta said. “I think at one point, I was connecting with 50 to 60 people on LinkedIn per day and just inboxing them.”

The organization has grown to more than 40 chapters over the last two years. High schoolers are trained to establish chapters in their countries and provided with resources and support to hold events and promote the organization’s mission. Elevate the Future has impacted students across the world in countries like Ukraine, Russia and Ghana, where the students have much fewer resources than in the U.S.

“We’ve realized that these students have even less access than we do over here,” Gupta said. “It has been a rewarding experience to work with these students.”

During the pandemic, the urgency and need for an online presence for small businesses further expanded Elevate the Future’s scope of work. High school students taught web development to middle school students, who began building entire websites for struggling small businesses, primarily ones who do not have an online presence, to help the businesses stay afloat. Furthermore, Elevate the Future supports the first half year of domain and web hosting expenses for each business through donations. Through this effort of supporting businesses, students not only contribute to the business but also expand their knowledge in business and computer science.

“Each of those websites that we’ve created is in part built by the middle school students,” Gupta said. “At the end of the day, we are killing two birds with one stone, and we’re helping these small businesses gain e-commerce platforms.”

Bernard Hutcherson, owner of a burrito business, was one of the many owners that benefited from Elevate the Future’s support. For this project, Elevate the Future volunteer and senior Rishi Pradeep mentored middle school students to efficiently design a website that specifically fit Hutcherson’s needs.

“We built a complete website for [Hutcherson], including SEO, hosting and domain,” Pradeep said. “We also built an online platform for him to sell his food. This helped in automating his daily process and allowed him to take more customers because of the shift in efficiency.”

Gupta and Garg’s efforts to create a positive impact in the local community and serve people like Hutcherson have earned them the 2020 Bay Area Jefferson Award for Public Service.

“A year and a half ago, I was more of a [computer science] guy,” Pradeep said. “From [Gupta], I got some better social skills and got to work with people of all different diversities. Both [Gupta] and [Garg] have been able to inspire so many people and help so many younger students. It’s pretty fitting that [Gupta] got the Jefferson award for [his] work.”

Upon receiving the award, Gupta felt proud and a strong sense of fulfillment.

“It was kind of like a validation of the work that we’ve been doing,” Gupta said. “I’ve been putting in so much time into Elevate the Future.”

Gupta’s journey of starting an organization, successfully expanding it to serve local as well as global communities and his reception of the Jefferson award as recognition for his work is an inspiration for Lynbrook students. Learning from his experiences can be useful for other students, who want to start their own organizations, explore opportunities to volunteer and learn life skills.

“My advice would just be to dive right in,” Gupta said. “I remember starting this organization, and there was so much paperwork that we had to do. I had no idea what any of that meant.”

Gupta’s hard work and diligence paid off, as reflected by the quick expansion of Elevate the Future and the meaningful impact it has made globally. His long term plan is to grow its presence all across the countries and serve communities worldwide.