Mirror mirror on the wall, who’s most racist of them all? 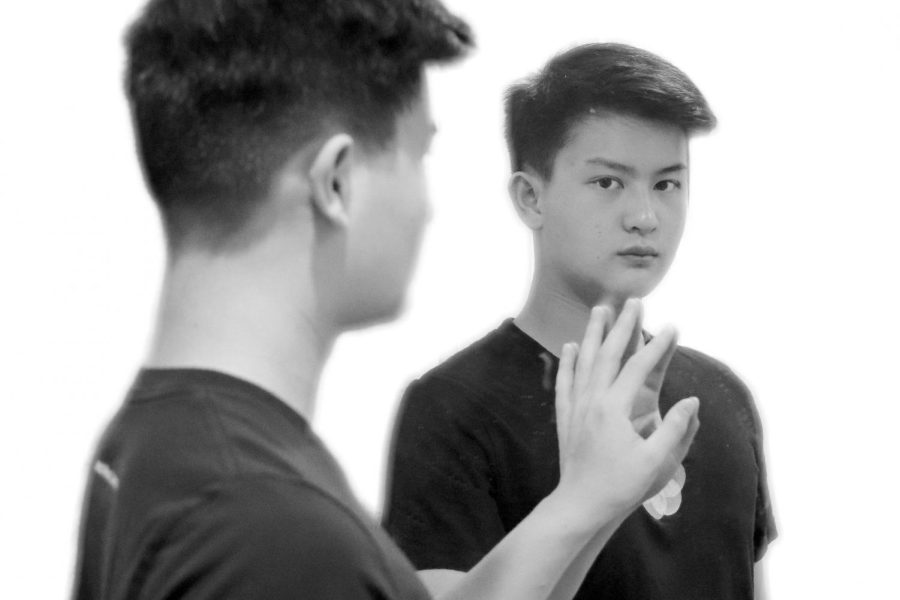 The writer, Bennie Chang, staring into the mirror and pondering over the truth about racism.

Mirror mirror on the wall, who’s most racist of them all? He’s vanished, hidden, crawled deep within, lost to all who dare not fall.

According to the Oxford Dictionary, racism is “prejudice, discrimination or antagonism directed against a person or people on the basis of their membership of a particular racial or ethnic group, typically one that is a minority or marginalized.” Do the words prejudice, discrimination and antagonism combined with the word “you” sound appealing? Hopefully not. Nonetheless, what is to say that it isn’t true?

Growing up in progressive Silicon Valley, the heart of technology, immigration and progress, I was immersed in a world of diversity, integration and acceptance.

Or so I thought.

For most of my life, I had taken advantage of the life that I lived and the principles that I cherished. But my illusion of perfection and moral high ground stood on the fault line. With the deplorable KKK and Neo-Nazis rallies in August 2017, it was easy for me to say, “I am not racist,” because I didn’t scream hatred like them. I harbored a sense of superiority because I was better than them, better because I wasn’t racist. However, it was all a lie.

My journey of introspection began when I traveled to urban Baltimore in the summer of 2019. As I strolled down the sidewalks, it wasn’t the musty air that bothered me but the pit in my stomach that plummeted into an abyss whenever I walked past someone who was clothed with dirt and didn’t look like me.

The combination of a foreign setting with “questionable” people, mostly Black men, smoking pot and speaking in uncensored language had me clinging to my parents’ arms like a child. I had never felt that way before: scared and repulsed. That seed in the back of my mind, the one that says all Black people are like that, secretly sprouted. However, as I stepped into Baltimore’s distinct markets, where suburban Black people who had just finished their work shifts flooded in to purchase their daily lunch, I saw how they weren’t much different than me. Although their lifestyle varied from my suburban Silicon Valley comforts, their skin was a little darker and their shoes a bit more worn, they were no less human than I.

That day quickly receded into my memory, but every so often, my discomfort in harboring a stereotype like that in the back of my mind resurfaced. For months I refused to acknowledge it, and only recently have I realized the truth.

Be honest with yourself. No one is around.

Consider this: As the light dims and the evening rises, you step out onto your porch, stretch and tug at your dogs’ leash to tell him to wait for you to put on your shoes before the daily walk. It’s another ordinary night: dark and breezy, yet warm. Yet it is unlike other nights because, in the corner of your eye, you see a shadow step out of a car. Despite the blanket covering the sky, you know that this person isn’t your ordinary white neighbor coming to say hello, or your Asian friends arriving to drop off food. From the clothes to the car, you know that he is not from nearby. However, what makes him different from the neighbor’s plumber, or the gardeners that come every Tuesday?

He is a Black man in your neighborhood at night.

What do you do? Continue your walk, approach the man or scramble back inside in your ranch home to spy on him? Would you call the cops? What if he approaches you? Do you greet him warmly, the same way you greet your neighbors? For me, I don’t want to know what I would do. A Black man in my neighborhood: I sincerely hope I wouldn’t impulsively jump to conclusions. Unfortunately, I’m honestly not sure.

This attitude is far from uncommon. We have heard and even seen these examples play out. Many have led to the death of innocent Black individuals, events that have us shaking in pity and anger. When you look at someone else, it is easy to say that he or she was wrong, stupid and racist. But what if it wasn’t someone else in that situation? What if it was you?

We see the stereotypes placed upon people of color firsthand, especially Black Americans. “They are poor. They are uneducated. They are criminals. They don’t belong here.” Despite social justice movements and heightened focus on equality, systemic inequality and perpetual stereotypes in our country persist. People can talk all they want and protest all they want, but nothing will change.

Unless they change. Unless you change.

No matter who you are or the color of your skin, you participate in our racist system. However, you don’t have to. Acknowledging your intrinsic racism is the first step in creating a more just America. Only after you have identified your inherent racism can you find and work toward solutions to combat it.