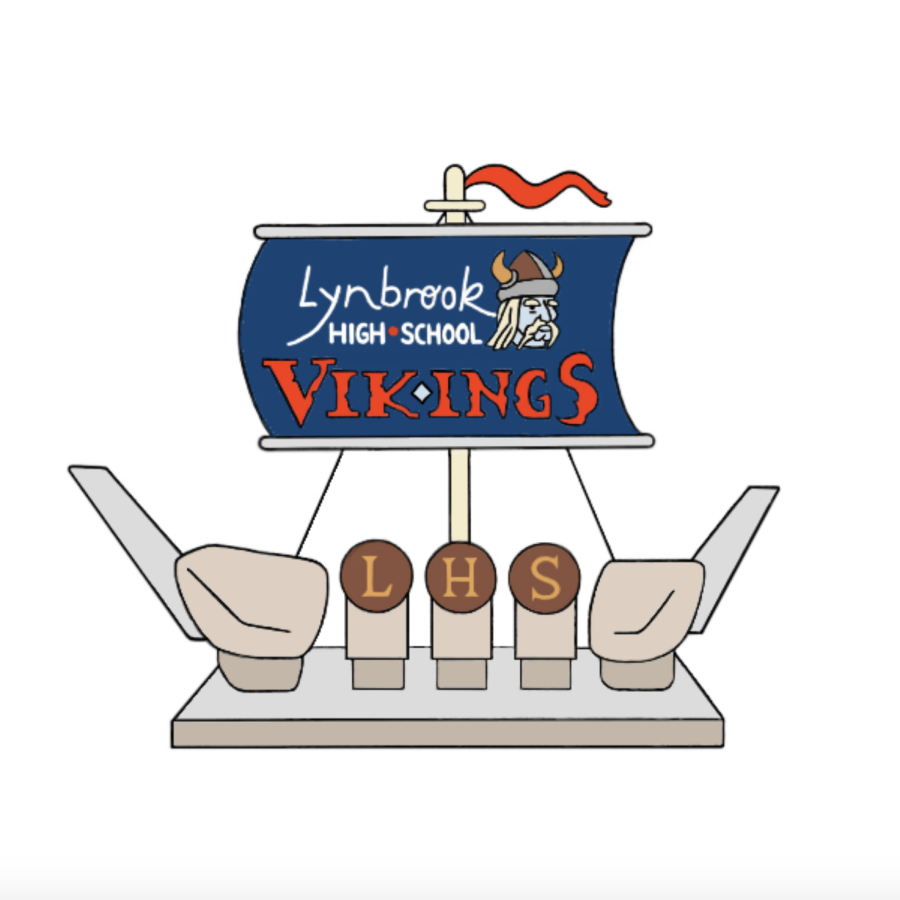 The history and significance of Lynbrook’s iconic symbols spans many generations of Vikings.

While Lynbrook may be known for its high-achieving student body and diverse schoolwide traditions, its structural symbols celebrate the pride and honor of all past, present and future Vikings. Such symbolic landmarks include the iconic mural at the front of the school, recently taken down in accordance with the construction of the new gym lobby, as well as the concrete Viking boat. Landmarks like these, with their prospective history and significance, become so commonplace that students don’t truly appreciate them until they are gone.

The signature mural was a painting of a blue Viking alongside the words “Lynbrook High School,” and welcomed students to campus everyday for years. The Viking’s prideful expression encouraged school spirit and served as a reminder of the strong connections that define the Lynbrook community.

Professionally painted in the mid to late 1990s as a gift from a senior class, the mural’s history spans many generations of Viking staff and students. Throughout the years, the mural itself hasn’t changed, however, new elements such as the “Blue Ribbon School” sign have been added. During one eventful Homecoming, seniors from the Class of 2009 even took to pseudo-graffitiing the mural to cement their final memories of the school. This isn’t the only instance of pseudo graffiti during Homecoming, as the mural was once turned into the Joker from Batman and another time turned into one of the “Huns” from Mulan. Current staff members who have remained at Lynbrook for many years also look back on the mural fondly.

“One of the things about a mural is that it can’t be like any other school,” social studies teacher and Lynbrook class of 2000 alumnus Jeffrey Bale said. “For the most part, [the mural] was the central point of the school. Just based on the campus design, it’s where everybody congregated, after school, before school and before walking into the main quad area. You get attached to things.”

Furthermore, the bold Viking had always been a popular backdrop for ASB photos displayed on the school’s website. The mural not only represented the school and its mascot, but also the confidence and pride instilled in its students.

Despite its decades of history, the mural had to be removed earlier this year. Due to the ongoing construction on campus, it would have been covered by the addition of the new office building. According to Principal Maria Jackson, the school does not have any current plans to repaint the mural, meaning the iconic blue Viking may never again adorn the school’s walls. However, even without a physical presence, Lynbrook Viking pride will live on in the hearts of all staff and students.

The mural isn’t the sole symbol of Lynbrook that has been removed in the past. Another well known structure is the Viking boat, an allusion to the vessels that the real Vikings sailed.  Unfortunately, it was removed in 2018 during the construction of the new quad.

The very first Viking boat was a senior gift from the Class of 1970. It was a sculpture made of bricks, originally featuring a mast which was taken off at some point throughout the years for safety reasons. According to art teacher Charlotte Kruk, the art department had plans for students to create sculptures of symbols they thought represented Lynbrook and fill the boat with them. Unfortunately, this did not happen before the original Viking boat was removed.

The latest Viking boat, which was funded through donations by the classes attending Lynbrook at the time, was redesigned in 2009 and built in 2011. It was made up of five concrete sections, the three in the center adorned with metal plaques spelling out the letters “LHS”. Three other plaques with school emblems were located on the other side of the concrete blocks, and behind the structure itself was a small seating area with a bench. The boat was located near the main entrance to campus, near the front of the auditorium.

“I think it’s funny that [there are juniors who are] totally unfamiliar with [the Viking boat], because it has been simply iconic on campus for my whole 24 years here,” Kruk said. “It’s a way to remind us of the symbols that represent our school.”

Before it was removed, the Viking boat was a popular place for students to take photos for events such as Homecoming and simply to sit with friends during lunch. It was also once decorated with golden Emmys by Lynbrook’s Indesign club for their annual fashion show. Another time, it was decorated as a full scale model of the Hogwarts Express, complete with a chimney expelling steam.

“It was a really nice place to stand in the afternoons after school ended,” senior Anushka Hadke said. “The flowers were blossoming and it made me feel at peace.”

Fortunately, after several years of absence, the iconic Viking boat will make a reappearance at Lynbrook once the latest construction is finalized. The structure is currently under restoration, and will be placed at the top of the quad in front of the new gym lobby.

While staff and students can look forward to the renewed Viking boat in all its symbolic glory once they eventually return to campus, they will not be greeted with the familiar face of the school’s mascot on its walls. The historic mural’s removal is just one sign of the major evolution of the Lynbrook campus, since the school has already experienced major changes to its architecture due to its numerous construction projects. However, like the reintroduction of the beloved Viking boat, this transition into a more modern campus potentially hails the establishment of future symbolic landmarks that will even more so represent Viking pride.