Mid-Autumn Festival in mid-quarantine: A new moon of challenges 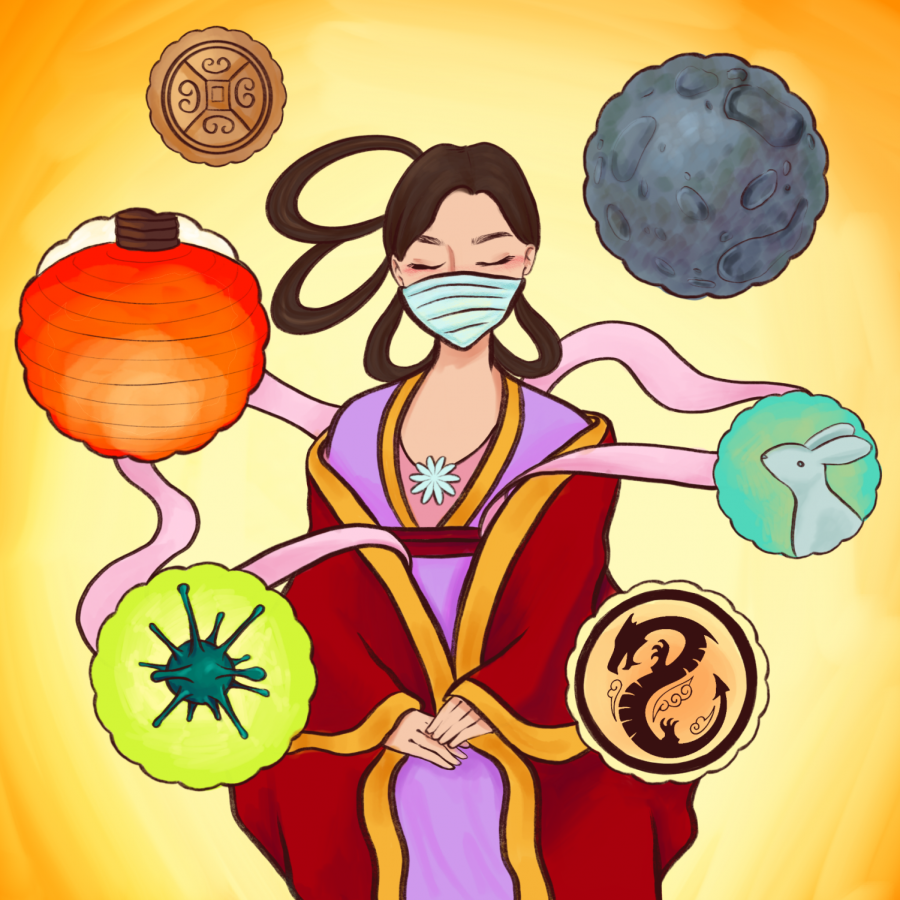 In a traditional Chinese Mid-Autumn Festival celebration, also known as zhong qiu jie or the Moon Festival, family members who live apart gather together around the dinner table, eat mooncakes and moon gaze, called shang yue in Chinese. However, with the new norm of social distancing, many families had to adapt to this year’s challenges when celebrating on Oct. 1.

The most famous character in Mid-Autumn Festival mythology is Chang’e, the moon goddess. She married Hou Yi, an archer from another famous Chinese story. The Queen of Heaven, a Chinese mythological character, awarded Hou Yi with an elixir of immortality after he shot down nine suns and saved people from the burning earth. Hou Yi, apprehensive about the idea of immortality but not wanting to disrespect the queen, accepted the gift and stored it away in a secret place.

One day, he went on a trip, leaving Chang’e alone at home. A thief broke in, knowing about Hou Yi’s secret elixir, and threatened Chang’e to give it to him. Chang’e, in a panic, drank the elixir for herself, causing her to float to the moon. When Hou Yi returned and found out, he grieved by bringing mooncakes out at night as a sacrifice for her, since they were her favorite food. There are many different versions of this story; in some versions, Chang’e was greedy and snuck the elixir for herself. In others, she first went to heaven, but then was banished to the moon after the queen found out.

Another myth is about the moon rabbit, sometimes also called the jade rabbit in Chinese. The rabbit is Chang’e’s companion on the moon and is known to grind medicine with a mortar and pestle. According to a legend in Beijing, in ancient times, a deadly plague killed many people. Chang’e sent the rabbit to earth to visit each family and heal them with the grounded medicine. After it returned home, citizens regarded the rabbit as a hero.

“The Chang’e story is really popular,” sophomore Mina Chao said. “When I was little, I liked drawing out Chang’e and [the rabbit] together because it is cool to see the different Chinese myths collide together. When my dad was trying to explain [the story] I drew it out, and I still have it on my bedroom wall.”

However, this is not the only story in Chinese mythology that explains the significance of the mooncake. According to legends from ancient times when the Han dynasty was at war with the Mongolians, the Han people baked little pastries with messages inside that gave secret instructions for a revolution. These mooncakes were then circulated among families, friends and neighbors, and eventually helped the civilians defend their villages from the Mongolian troops. Today, Chinese people still send mooncakes to relatives and friends to celebrate this tradition.

Mooncakes, also called yue bing in Chinese, are often circular, representing the shape of the moon, but can also be squares. They serve as gifts between friends, and are most commonly eaten with tea. This famous pastry is usually filled with red bean or lotus seed paste, but can also include mixed nuts, dates, green bean or even salted meat. Usually, mooncakes have buttery crusts, but sometimes snow skin mooncakes are made with mochi or glutinous rice. Nested in the center is often a salted egg, symbolizing the full moon. Symbolic images are often imprinted on the mooncake as well, depicting the moon goddess Chang’e, the rabbit in the moon, flowers or auspicious characters or phrases.

Family gatherings and shang yue are also important traditions. Traditionally, the Mid-Autumn Festival was intended to celebrate the harvest, since the majority of the Chinese population were farmers at that time. Now, it is a tradition that allows people to embrace their ancestry, culture and identity. Since Asian cultures value the idea of filial piety, these activities symbolize strengthened bonds between family members.

“Sometimes [my relatives] only come by for Chinese celebrations,” Chao said. “When we give mooncakes to each other, it’s a special occasion. It makes the festival more special and creates more connections.”

The most prominent yet simple symbol is the circle, which can be seen in mooncakes and the full moon. The symbolic importance of the circle represents togetherness and reunion between families.

“When I was in elementary school, we usually went to the top of our house, and we lay down and appreciated the moon,” Chinese teacher Jasmine Chen said. “We watch the moon for hours and have you zi, a kind of fruit, and really enjoy the moon, food and family together. We ended up sleeping on top of the roof the whole night.”

With social distancing protocols in place, families are facing difficulty celebrating this holiday when its essence is to bring distant families together. In previous years, extended family members who lived apart would gather together for the day. This year, families have to make accommodations.

Although isolation is the biggest challenge this holiday, familial bonds will still be strengthened despite the physical distance. As the Chinese saying goes, 「但愿人长久，千里共婵娟」This can be translated to “Despite being thousands of miles apart, we are still united under one moon.” The various challenges of pandemic protocols may limit families’ celebrations of the Mid-Autumn festival, but the importance of family remains in the heart of each household.