Zoomed in: Exploring the effects of online learning 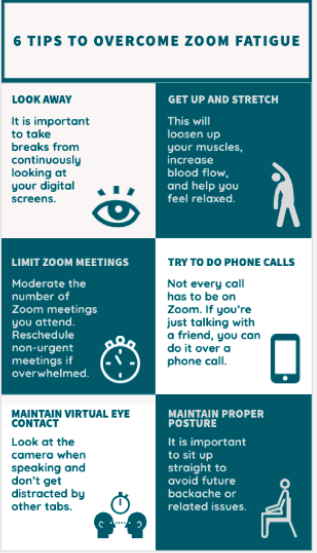 As students and staff spend hours on Zoom every school day, it is important to be aware of and understand indications of Zoom fatigue and follow self-care practices to maintain physical and mental health.

In late February, 90,000 schools across 20 countries were using Zoom. In March 2020, the Zoom app saw 2.5 million downloads. Whether it’s for social gatherings, classes or work, more and more people are using Zoom to connect during quarantine.

As online school begins for most local schools in August, many students are using Zoom to attend classes. While Zoom is useful for staying connected and continuing synchronous learning, too much time is spent in Zoom meetings, and it can be exhausting for many. Many factors cause this exhaustion, often referred to as “Zoom Fatigue,” though it can come with other video-conferencing apps as well. Just using a screen can be draining for human minds.

“Think about if you went to a loud rock concert or a roller coaster,” said school psychologist Dr. Brittany Stevens.  “Overstimulation creates exhaustion. It’s overstimulating for our brains to be on electronics. It’s not what our brains are evolved to be awesome at. ”

The constraints of social interaction through technology can also tire people out. Over Zoom, whether it may be due to the lighting, camera quality or framing of someone’s shot, body language is not properly conveyed through the screen. Facial expressions and other nonverbal cues are also much more difficult to pick up and interpret. Though their significance is often overlooked, nonverbal cues play an important part in facilitating communication between people. People can often intuitively gather an individual’s motivations, mood and openness based on his or her vocal tone, expressions, gestures and posture.

Technology makes communication more cumbersome in other ways as well. Technical difficulties including internet issues often arise during Zoom meetings. Lags and unintentional silences, by reducing the flow and naturalness of conversation, can be sources of stress. Anxiety about technology working properly is another damper on the conversation that makes communicating over Zoom stressful and thus taxing on the mind.

Oftentimes, Zoom meetings require cameras to be on continuously, giving participants a sense of being constantly watched. Knowing everyone can see them can make individuals feel self-conscious and uncomfortable.

For students, Zoom meetings may fall short in recreating a completely comfortable and enjoyable classroom environment.

“I’d rather go to school,” said sophomore Sanved Doshi. “It’s more fun because you can meet with your friends and talk with them. It’s more interactive.”

Since parts of technology inevitably disconnect people, it is important to find in-person interaction and community when possible. Stevens personally recommended walks in natural environments, like the outdoors, downtown or neighborhoods. At home, spending time with family can also help alleviate stress and anxiety.

The constant change during the COVID-19 pandemic can be overwhelming as deaths and cases climb and fall. Federal and state governments have had to pass dozens of restricting regulations, causing events to be canceled and businesses to close. Having to participate in Zoom meetings can remind people of all they have lost and the major disruptions in their lives, which in turn causes stress or sadness.

Humans become attached to certain systems and structures. As the self-complexity theory proposes, people thrive on a healthy variety of social roles, relationships, activities and goals, which normally have different contexts in one’s life. For example, students may get used to associating a school setting with socializing and working with classmates, and home with spending time with family. During quarantine, all the usual contexts have disappeared, leaving only a couple of options: home and the screen. This new reality can create confusion and other negative, draining emotions, such as grief.

Grief is known to come in stages such as anger, denial and bargaining, though they aren’t strictly ordered and can vary from one experience to another. Acceptance is the healthiest stage, when grief becomes most manageable.

“When we have a really catastrophic or drastic change in our lives, what we often struggle to label first in our experience is grief,” Stevens said. “It’s important to feel your feelings, because the only way out is through. We have to say we miss people when we miss them. We have to say that we’re mad that this is what happened. We have to label [those feelings] and be honest, because that’s the only way we’re going to get to acceptance.”

Changes in structure also cause distraction. Zoom meetings at home lack a more controlled environment provided by in-person school; with more freedom and opportunity to tune out, listening requires additional concentration and self-control. Focusing for hours on a screen takes a lot of mental energy.

Over the summer on Zoom, senior Patricia Huang took art workshops ranging from two to eight hours a day, with many of the meetings essentially back to back.

When there were breaks, Huang liked to stay off screen and did simple activities like grabbing a drink of water. To boost productivity, she also found it very helpful to designate certain spaces for different tasks, like her desk for working and outside for relaxing and taking breaks.

A study by DeskTime, an employee productivity tracking software, revealed the most productive people work for approximately 52 minutes before taking a 17 minute break. The effective “breaking” improves engagement and attention to tasks. Lynbrook’s remote learning schedule leaves time between synchronous learning periods to allow for students to step away from the screen and recharge.

Beyond the mental effects, sitting in front of a screen for extended periods can be physically exhausting.

“I think that sometimes people end up feeling actually kind of drained, even people who love talking to other people, you know, and being connected to other people,” Stevens said. “This format can be really draining, and people sometimes are surprised by it.”

Many studies have pointed out ill-effects such as “computer vision syndrome,” lack of sleep and body aches.  Computer Vision Syndrome is a common side effect of extended time spent in front of the computer. Reading text on the computer does not have the contrast and format as printed characters, and it can make it difficult for the eyes to focus on them. The eye muscles work more to maintain focus on the screen which increases eye strain and fatigue.

Eye strain can also occur when looking at the screen continuously for extended periods of time, especially during zoom meetings. Many electronic devices emit “blue light” and being exposed to this light for a prolonged period of time can stress the eyes, tire them and cause discomfort. The constant movement of the eyes trying to focus on multiple things on the screen also causes a lot of strain on the eyes as they are not trained to see multiple, fast-moving screens.

Another effect of continuous screen time is dry eyes, a problem that is further intensified in contact lens wearers. Dry eyes can cause itching, excessive tearing and burning. They are also known to cause blurred vision and at times can lead to conjunctivitis or “pink eye”.

Excessive screen time can also cause headaches and small migraines which can be tiring. Sitting in the same place for long hours can be uncomfortable. Sitting in the same position for long periods can cause neck strain, which may worsen migraines or headaches. Since a person is constantly facing a camera, it is hard to adjust one’s position, possibly causing bad posture that may lead to chronic back, neck and body pain.

A few ways to overcome physical fatigue caused by long Zoom meetings are to look away from the screen every few minutes and to get up and stretch. Meditation, yoga and listening to calming sounds can mitigate negative effects as well. As students and staff spend hours on Zoom every school day, it is important to be aware of and understand indications of Zoom fatigue and follow self-care practices to maintain physical and mental health.