Online tools: which is the best fix? 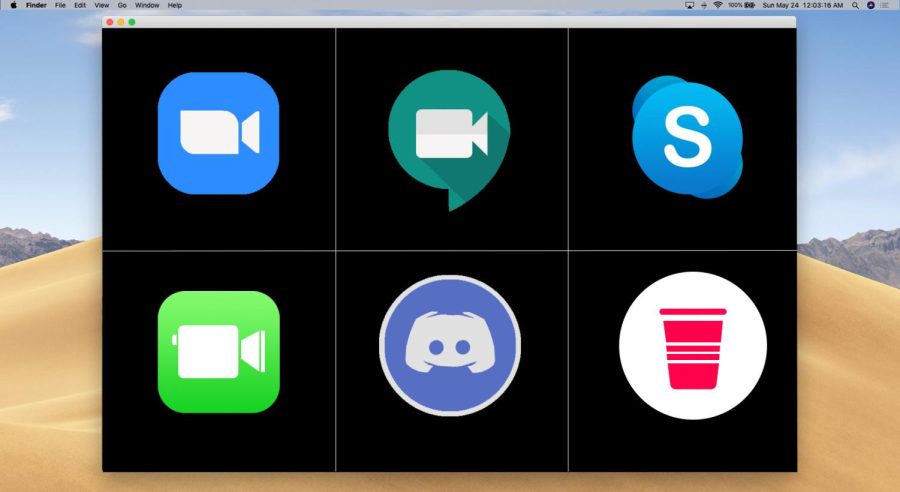 It is safe to say that COVID-19 has transformed everyone’s lives; from daily news conferences to strict social distancing protocols, it is hard to think of anything else. In addition to attending classes, students have lost the daily opportunity to see their friends in real life. While many online applications now claim to support online classes well while also allowing social interaction among attendees, is that truly the case?

When considering which applications to use in order to create their virtual classroom environment, teachers took many factors into account, including comfort and ease of use for both students and teachers.

“When I considered which apps to use, my first objective was to make it easy on the student. I didn’t want to add a lot of new, complicated technology; I was concerned that students would feel overwhelmed by the change to remote learning or they would have trouble learning or accessing new technologies,” English teacher Terri Fill said. “I was also looking for technologies that would support the students’ learning as much as possible during our precious instructional time.”

Zoom is a video conferencing app to which many teachers have turned during  shelter-in-place. It has quickly grown in popularity, and with the versatility of the application, some students have even begun using the app as a way to talk to many of their friends at once. Additionally, some students even tutor their peers by using Zoom. The host can have a large class session and split students up into smaller groups for activities such as discussions by using the breakout room feature. Teachers can also share their screen in order to walk students through specific problems, so the app lends itself well to teaching.

However, Zoom has faced some backlash due to security concerns. Soon after the app became more widely used, people have witnessed hackers joining and disrupting random meetings. Some strangers entered random meeting codes in attempts to find a live one, but other hackers were able to access a list of these codes. Some of the actions of these so-called “zoom-bombers” were harmless, while others shared extremely inappropriate content, which prompted great concern since many school-aged children are using the app.

“We were just starting [AP U.S. Government] class when a stranger joined our Zoom call and decided to screen share really inappropriate images, which led to our class being cut short,” senior Aayushi Jani said. “It was really unexpected and I don’t think any of us ever thought that a stranger would be able to join the Zoom call for our class. I think it definitely opened my eyes up to the drawbacks of online learning.”

In response, Zoom began stressing the importance of using security measures that were already in place, but not well known, including requiring passwords to join meetings and enabling  by default a waiting room in which hosts manually admit participants.

Similar to Zoom, Google Meet is also a video conferencing app that can accommodate large groups of people. This app was largely unknown before the shelter-in-place measures were implemented, but it is growing increasingly popular as another application that teachers are using to hold virtual classes.

Google Hangouts is an online tool that can be used both for educational and personal purposes. Many teachers use it for class-wide video chats or one-on-one video chatting for their classes. However, people do not often receive notifications for incoming calls and may miss their meetings if they do not check Hangouts outside of class, so students still have to use email to communicate with their teachers.

Skype, although it has existed for a while now, is gaining some more users during this time period. While not as popular as Zoom, Skype is known for having higher sound quality than many other video conferencing apps, making it appealing to those who teach music classes. However, the video tends to freeze and glitch frequently, which can be frustrating if a student is trying to learn while using the app.

While these resources are all valid ways to facilitate online learning, many teachers are still worried about the quality of education they are able to give from a distance.

“To me, it still feels artificial, and it still yields subpar results in terms of the quality and quantity of ideas shared, but I’m hopeful this will change with time,” Fill said. “I miss our whole-class discussions and I hope we will be able to recreate them as we all get more familiar with the technology and as I gain more experience in facilitating.”

There are also many apps that have gained popularity among students, in order for them to continue interacting with their friends, whom they can no longer see face to face.

For people who use Apple devices and want to contact their friends, FaceTime can be a useful option. It is convenient because only a phone number is needed to start a call with a friend, and it is easy to switch between a normal voice call and a FaceTime call. People will be easily notified if they have an Apple device on hand. However, FaceTime does not run on non-Apple devices, and after a long period of time the call begins to glitch and lag.

Discord has also found its way to the forefront of communication apps during shelter-in-place, though video calling is not Discord’s main feature. Discord brings communities of people together with servers, organized by channels, and have a huge variety of features including voice and video call. Discord has a focus on gaming, but many people with other interests use it to keep in touch with friends. However, the video and audio quality may not be the best.

“Of all the apps I’ve been using to stay in touch with my friends, Discord is my least favorite because it keeps cutting out so the voice chat is very choppy,” senior Aaron Tai said.

Another potential issue for Discord is that a user’s identity can be easily hidden. This poses a problem for clubs like Anime club, who regularly use their Discord server to communicate to their members.

“People can just basically waltz in because all they need is the URL, so they could just come in randomly,” Anime club treasurer Tiffany Hwang said. “We also have a few people who are not from Lynbrook. It can get confusing, trying to figure out who’s who.”

Despite some drawbacks, Discord remains a useful platform for people with similar interests to keep in touch.

“We’ve been using the voice chat option to stream anime, and people ask for recommendations for anime during this time because they have so much time now to just watch anime,” Anime club vice president Annie Hwang said. “It offers people to connect with other people even during quarantine.”

Similarly gaming-focused, Houseparty is an app that allows users to play live games and video chat with friends. People receive notifications when their friends are online, and can join other “houseparties” that a friend may be part of, which makes video chatting on Houseparty more fluid compared to other apps. However, if users are concerned about privacy, they have the ability to “lock” the room.

While COVID-19 has caused a dramatic shift in everyone’s daily routines, and led to the demise of many activities, it has provided the opportunity to explore many of the resources available online. While not all of them might be adequate, some may serve to better our learning experiences and maintain relationships, even when we are able to return to the classroom.