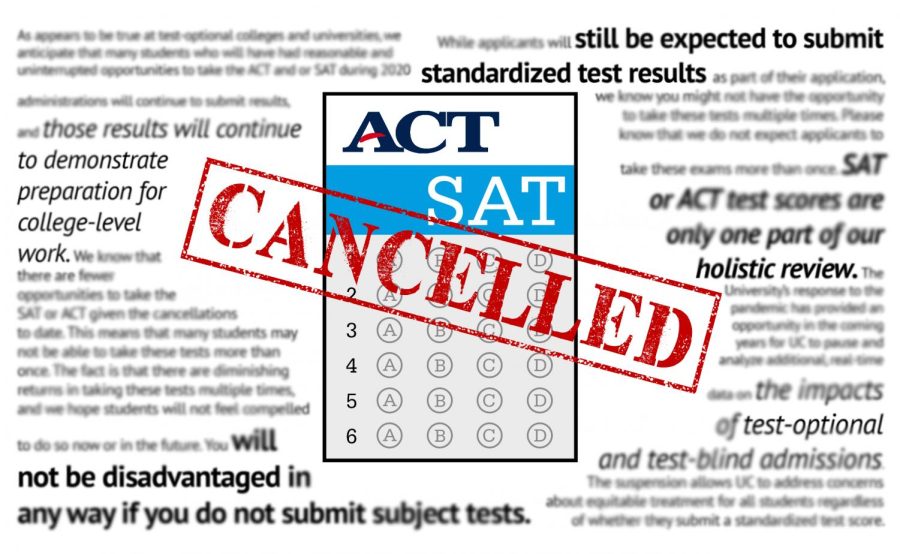 With the cancellation of standardized testing in spring 2020 because of COVID-19, the College Board and ACT rescheduled their standardized tests for later dates in the summer and fall with plans for administering digital versions should schools stay closed. In response to the disruptions in testing that students have experienced, many colleges have changed their policies regarding test score requirements for fall 2020 freshman student applications and beyond.

Students first realized that their standardized testing opportunities were in jeopardy in early March, when the College Board initially rescheduled the SAT and SAT Subject Tests on March 14 to March 28 for certain testing locations. All test centers in Santa Clara County were affected, and many Lynbrook students learned that they could not take their exams only days before the testing date.

“When the test was first canceled, I didn’t feel discouraged,” junior Erin Min said. “I actually felt a little relieved because I would have more time to study. After hearing standardized tests were getting canceled again, I wasn’t discouraged because I knew I would have a chance in senior year.”

Shortly after the initial rescheduling, the U.S. government issued orders to avoid social gatherings on March 16 and California imposed a statewide stay-at-home order on March 19. In response, the College Board cancelled the March and May makeup tests and students who registered for those tests received refunds.

In mid-April, the College Board notified students registered for the June test date that their tests were cancelled as well. They would all get early access to sign up for future test dates that would take place every month for the rest of 2020, starting in August. However, if fall tests could not be held in person because of social distancing protocols, College Board would provide a digital SAT test for students to take at home, similar to their development of online AP exams.

“I feel like online standardized tests wouldn’t be that bad, but I’d prefer to take the test in person,” sophomore Stephanie Wang said. “I don’t think it’s possible to take in-person tests by fall 2020. Even though the situation is getting slightly better, I don’t know what’s going to happen by fall 2020, and I feel like the situation will not get better that quickly.”

ACT has taken similar actions in response to the pandemic. The organization postponed its April 4 national test date to June 13 and plans to hold an additional test on July 18. ACT notified students the week of May 26 to announce test centers’ closures for June 13, since many test centers would not be able to open in accordance with public health guidelines. Students can choose to reschedule their tests to July 18 for no additional fees. ACT has also planned makeup test dates for June and July in case test centers are unable to open due to public health guidelines. In late fall 2020, ACT will introduce a new option for students to take the ACT test at home through remote proctoring, as the College Board will with SAT tests.

“I’m overall satisfied with ACT’s response to the current situation,” junior Christy Yu said. “I’m glad that they are trying to give students an opportunity to take the test as soon as possible given the current circumstances instead of waiting until fall.”

Despite the College Board and ACT’s responses to provide alternative testing options, rising seniors who have not yet taken the SAT or ACT are worried about completing their tests in time to apply for college. Some are concerned that standardized test scores will still be an important part of a student’s application to competitive colleges.

“My application was going to be supplemented by good scores on subject tests, but now I may be applying to college with one less thing showing my academic ability on my academic profile,” junior Anoushka Naik said.

In response, many colleges have updated their policies on standardized test requirements by shifting to make test scores optional for this admissions cycle. Two Ivy League schools, Harvard University and Cornell College, released statements that students could submit applications without SAT or ACT exam scores in fall 2020. Other selective institutions across the nation, such as liberal arts colleges Williams and Amherst, have instituted similar policies for students seeking to enroll in fall 2021.

The University of California (UC) announced in March that it was suspending its standardized test requirements for prospective freshman students applying in fall 2020, but they will still accept student scores to be considered in the admissions process. Although the UC system reassures students that they will not be penalized in the admissions process for not submitting a test score, some are still concerned about the policy.

“It is much harder to get a good GPA at Lynbrook than it is at many other schools in the country, and standardized testing is the only way colleges can see the difference in quality of education between schools,” Naik said. “Going test optional gives the potential applicants from schools that are easier to get A’s in an unfair advantage over those who go to more competitive schools.”

Some schools have elected to extend test-optional admissions policies for several years. The reasons for their decisions included both concerns for the long-term effects of the pandemic on students and the preexisting trend at some colleges toward eliminating standardized testing requirements. Tufts University and Davidson College decided to implement a three-year test-optional pilot program while Scripps College removed the requirement altogether in March, although they did not state that it was in response to current events. UC will stop requiring test scores from California freshman applicants until fall 2024.

As students try their best to navigate the uncertainty of their new circumstances, the College Board and ACT are developing at-home testing to provide standardized testing opportunities to students. Colleges have understood and adapted their admissions policies, and the changes in admissions policies due to interruptions in standardized testing may catalyze a long-term shift toward test-optional policies.