Liberty and justice for all: standing united in the fight for equality 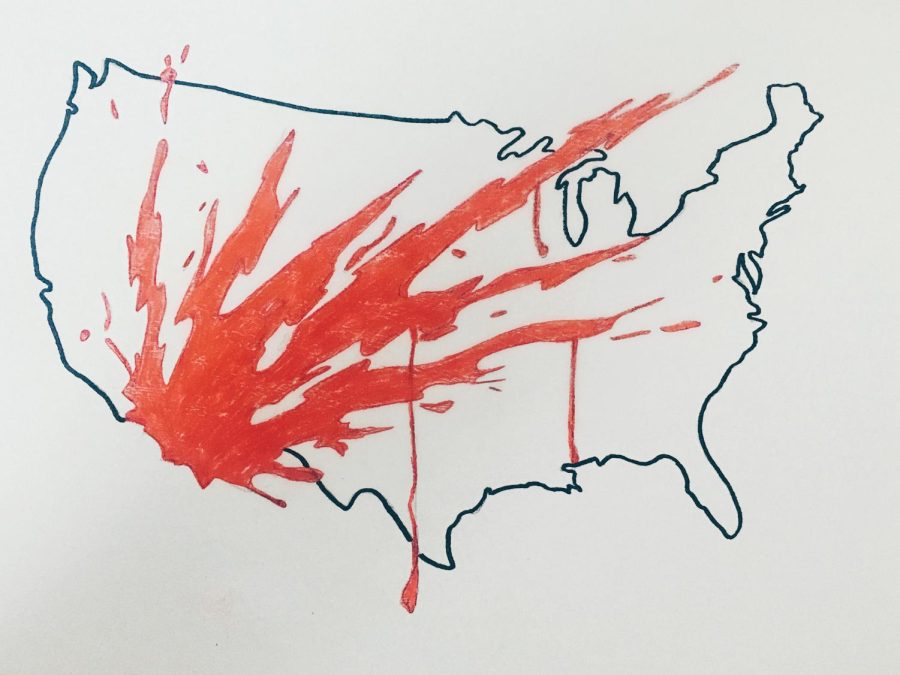 The bloodstains of all those who have lost their lives to the injustice of racism serve as a constant reminder of the inequality in America.

They say slavery is a blemish upon the glorious history of America, the land of the free.

In reality, the blemish never disappeared. It grew, larger and larger, its existence a dark smear upon our country’s narrative, the bloodstains of all who have lost their lives to the injustice of racism. It serves as a constant reminder of America’s failure to uphold the very principles of freedom and equality it claims to stand for.

It may hold various titles, hidden behind the illusory veil of the modern age, but the fact stands: black prejudice is still very much prevalent in our country. Michael Brown, Trayvon Martin, Ahmaud Arbery, and, most recently, George Floyd, among countless others, are all examples of the racism that may have been abolished on paper, but was never truly eradicated in the minds of the people. Members of the police force, the very people charged with representing justice, are taking people’s lives on the basis of skin color, in the name of patriotism. This is America.

Caucasians receive most of the blame for prejudice against blacks, but the fact of the matter is that they aren’t solely responsible—other minority groups can also contribute to the problem.

Asians are often regarded as a model minority, because we are said to supposedly have it all—education, wealth, status. As a part of the South Asian community at my high school in the heart of Silicon Valley, I see this stereotype all around me. Many of my peers take the education they receive for granted, often regarding the high rigor as a burden, rather than a blessing. Instead of actively paying attention in class, some choose to ignore the content being taught, while others in less fortunate circumstances would do anything to be able to sit in that classroom. They believe that they simply deserve all the opportunities available to them, for no apparent reason other than the fact that they are Asian, leading to a sense of self-entitlement.

Colorism also plays a significant role in Asians’ perception of the black community, and, when combined with a lack of exposure to African American culture, it often leads to racism.

Walking around campus, the chance of hearing a student use the N-word in casual conversation is more likely than not. It’s hard to accept, but it’s the truth. This attitude carried by some Asian-Americans inherently stems from the general acceptance of Asians as the model minority. While we may be progressive in our actions, our attitudes don’t seem to reflect that. Being part of a minority group doesn’t give us an excuse to be racist.

This stereotype may have been instrumental for Asians to climb the socioeconomic ladder in the mid-20th century, but it was the choice of some in the Asian-American community to continue to typecast themselves in this manner, despite seeing their rise in socioeconomic status. In today’s society, this so-called “model minority” exists only to pit certain minority groups against others, and it’s working.

We have to remember that truth be told, we Asians are able to reach such heights of success today thanks to the efforts by black civil rights activists to bring equality to minority groups. Without the groundwork they laid, we would not receive the opportunities that we are fortunate to have.

So why do we remain silent while those who helped us are suffering?

Tou Thao, a Southeast Asian member of the Minneapolis police department, did nothing as he watched his white colleague, Derek Chauvin murder George Floyd. Being a bystander to racism is equivalent to supporting it. Silence is a stance. Silence enables racism to continue.

How is it fair that we reap the benefits of the black community’s fight for justice yet simply stand by as they’re being killed in cold blood?

Yes, anti-Asian racism exists as well, but especially during times when racism against the black community is so prevalent, our community needs to establish that we stand with them. I want myself and my peers to be part of a generation of Asian-Americans that does better than those who came before us. We are inherently connected to the black community, and our ability to succeed in this country is tied to theirs. Change must be made, and it begins by initiating conversation.

I’m lucky enough that my immediate family members recognize the reality faced by many minority groups in America, and want to take action. However, I know of far too many others within my own South Asian network that turn a blind eye, under the excuse that it’s “not their problem.” Colorism has taken root within the Asian community as a whole, leading to the constant use of racial slurs without a second thought. We must reverse this attitude, and this generation of young Asian- Americans has the power to do so.

Sharing videos of members of the black community being brutalized and murdered isn’t the answer, and can actually harm members of the community being advocated for. Rather than causing more trauma, speaking up and standing as an active ally is of utmost importance within our respective communities. We have to actively stand up to not just police brutality, but racism of all forms, including the casual racism in our daily lives initiated by those around us. Asians are infamous for avoiding the discussion of uncomfortable topics, but starting this conversation is the only way for us to understand that many of our actions as a community have only served to advance white supremacy—harming all minority groups in the process, including ourselves.

“One nation … indivisible, with liberty and justice for all.”

I hope that one day, this will not just be a monotonous, memorized string of words, but rather, our reality.

If you want to help make a difference, attached is the link to the Justice for George petition: https://www.change.org/p/mayor-jacob-frey-justice-for-george-floyd