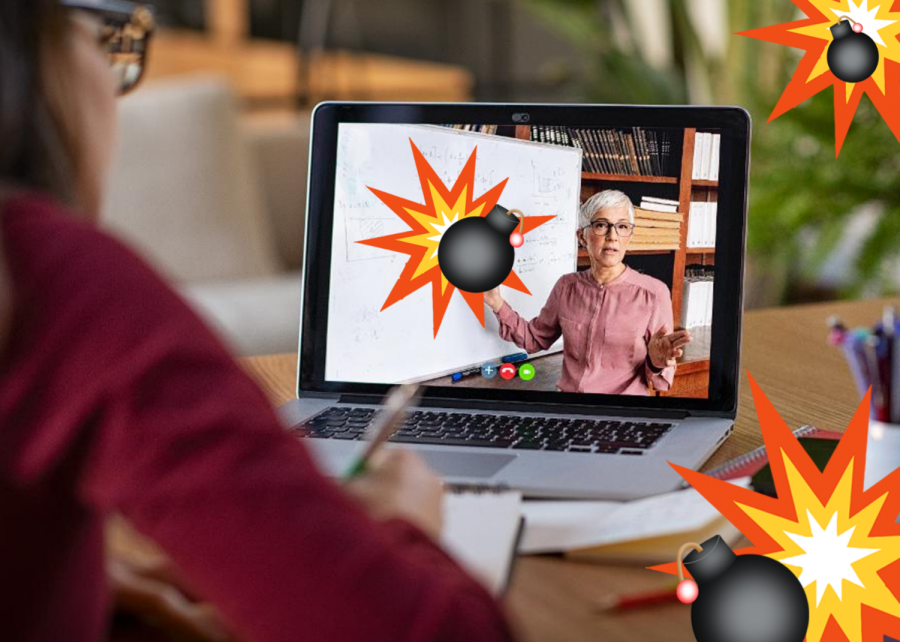 Zoom-bombing is now a significant disruption to online learning.

With the coronavirus pandemic causing disruptions to daily life across the U.S., schools have moved toward online learning. Zoom, a video conference website, quickly became an essential resource for holding online lectures and discussions. However, many “Zoom-bombings,” which occur when people join Zoom calls to disrupt meetings, have occurred during class sessions and office hours. In some cases, they are meant as pranks, but others have evolved into organized hate attacks.

Ever since Lynbrook started online learning, students and teachers have reported cases of Zoom-bombings. Junior Alex Cheng experienced this harassment on a number of occasions.

“I have had two distinct experiences with Zoom-bombings,” Cheng said. “The first happened during our virtual junior prom when anonymous people would transcribe obscene sounds that they personally found funny. The second was when someone impersonated me and a colleague during a Zoom call and said multiple vulgar and offensive terms without repercussions. In both situations, I felt helpless, as there was no clear path in finding justice.”

The administration and teachers in the district have implemented security measures in the light of such events. For example, some teachers require students to turn on their web camera and lock meetings once all students have checked in. Previously, Zoom bombers have crashed meetings by hacking into Zoom meetings or stealing passwords. Now Zoom automatically requires all meetings to have a password unless the setting is specifically turned off by the host. Upon entering a meeting, users are put in a waiting room before getting approval from the host for entry.

“We have had people get disciplined,” said Principal Maria Jackson. “Mrs. Sullivan has called students and parents to talk about behavior and consequences. We still are addressing

inappropriate behavior even though people are not physically at school.”

The Zoom-bombings Lynbrook has experienced have mostly been acts of mischief, a common trend throughout not just Lynbrook, but schools across the United States. In fact, a scroll through social media apps like TikTok shows light-hearted videos of social media influencers participating in this trend. However, in other cases, Zoom has also become a platform for targeted hate attacks.

The severity of this issue was brought to the attention of the FBI. On April 8, federal authorities made their first arrest in regards to Zoom-bombings. Zachary Huelsman from Madison, Conn., was subsequently charged for disturbing the peace, committing computer crime and planning conspiracy. According to Madison police, the teen purposely joined and disrupted online classes with obscene language and gestures. In another case, Oklahoma City University’s virtual graduation held on Zoom was cut short by racist attacks. A streaming church service in Massachusetts was disrupted by videos of Ku Klux Klan with racist music playing in the background. Now, officials say that Zoom bombers may face jail time if caught.

Hate crimes on Zoom are considered by authorities to be gross misdemeanors, and other disturbances are simple misdemeanors. In both cases, the charged face fines, jail time or both. The FBI takes these virtual offenses as seriously as the same offenses committed in person.

Despite new measures introduced by Zoom, many companies and governments have forbidden their employees from using the teleconferencing application for company meetings due to concerns about Zoom’s security. Instead of Zoom, some companies rely on professional video call applications such as WebEx. Some government officials have called for an investigation into Zoom’s security and data privacy policies, such as how long they keep user data for. In fact, the attorney general of New York, Letitcia James, sent a letter to Zoom asking whether Zoom has new security measures in place to handle increased traffic on its network and to detect hackers.

In response to recent Zoom-bombings and public scrutiny, Zoom has updated its application to strengthen existing security features through higher grade encryption and flagging of suspicious users.

“People love to see chaos breaking down the walls of order,” Cheng said. “Zoom is the perfect place to manifest this chaos, and because nearly every student is required to attend Zoom for their academic classes, it leaves no victims alone.”

Increasing awareness of the seriousness of Zoom-bombings has attracted the FBI’s attention and prompted Zoom to modify their application. With more security measures being taken to ensure a healthy Zoom environment for users, Zoom bombings will hopefully soon become buried in the past.