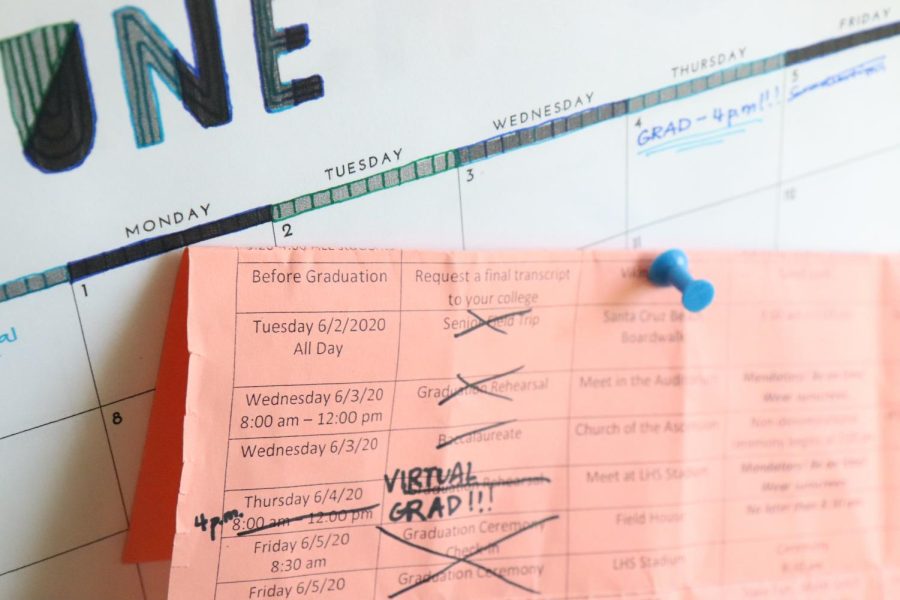 School closure has wiped many traditional senior activities off the calendar, including an in-person graduation.

Normally, seniors would spend the last week of school learning how to walk on beat in line with the others, practicing for their procession across the football field. They would prepare themselves for hours of bearing the heat of the sun and cheering loudly for their classmates as their names are called. While the coronavirus pandemic has led to the cancellation of a traditional graduation ceremony, the Class of 2020 is still able to enjoy graduation — albeit a virtual one.

COVID-19 has caused many changes, including schools moving online and people sheltering in place, but to many seniors, one of the most prominent changes has been the cancellation of graduation. Because of the pandemic and social distancing rules, graduation has been moved online. FUHSD is partnering with Herff Jones, Stage Clip and Marching Order, all graduation ceremony companies used by FUHSD schools in past years, to conduct virtual slideshow ceremonies. Each senior will have a slide dedicated to them with a photo, some text and a video message.

Seniors will also not receive their cords or diplomas in the traditional manner, but will instead be picking them up from school during the senior checkout process on May 28 and 29. Senior awards night will not be held virtually, but students will be able to receive their physical award according to each school site’s process.

The change has caused some feelings of loss such as disappointment or regret for many seniors.

“I knew it was inevitable, but it did not sink in until a week [after school closed],” said senior class president Anna Chiang. “I was FaceTiming my friends, reminiscing over old memories, and it hit me: we will be leaving each other, this place and our times here for good in a few more months. And now, I cannot be with the people most valuable to me right when we are about to separate.”

Other activities suspended include senior prom, often one of the most memorable events of senior year which takes place on a crowded boat in San Francisco. Senior ditch day and senior picnic could not happen either because of the statewide shelter in place restrictions. On top of that, several events which would have happened around the time of senior graduation such as All Night Party and Baccalaureate have also been cancelled.

“All I can remember [after the school shut down was announced] is feeling crushed that the idealized dream of becoming a ‘second semester senior’ we all had, of a time when we would be making our best memories with the people who meant the most to us, was never going to come to fruition,” Chiang said.

Seniors are not the only ones affected in a situation like this one. The school and district administrations had been preparing for graduation for some time as well. Some parts of the process, such as purchases of caps, gowns, flowers and chairs, began the start of the school year. The district’s responsibilities, such as implementing board policies for graduation and ensuring seniors are ready to graduate, are mostly behind-the-scenes, while much of the graduation process is left up to the individual campuses.

“This year is probably an anomaly in our levels of involvement,” associate superintendent Trudy Gross said. “In a typical year, we make sure that the board policies are followed, but the ceremonial pieces are left up to the schools. This year, we decided we were going to hold graduation in unison, so every school would conduct a virtual ceremony.”

Though the district is now more hands-on in many respects, its staff cannot perform traditional ceremonial functions at graduation. District administrators will no longer shake hands with graduates as they would have in previous years.

“I have made a point to go to almost all the [graduation] practices and tried to shake every graduate’s hand,” FUHSD superintendent Polly Bove said. “Somebody has a robe on a hanger for me. I get to march in, stand there, watch everyone’s faces and shake their hands, and it is absolutely a very joyous moment that I am going to miss.”

District administrators understand that students wanted more explanation as to how the district arrived at the decision to hold a virtual graduation.

“One of the strongest things I heard was that there wasn’t an understanding of how we came to the decision and absolutely when I heard that, I thought, ‘I get it,’” Gross said. “It’s so hard to write a message people are going to read because if you try to explain everything, you’re going to write a three-page message. So many people are grieving, and nothing is really going to change that feeling, but we’re really trying hard to find as many ways to celebrate our seniors as possible.”

Some have proposed postponing an on-campus graduation. A Change.org petition was started by Lynbrook senior Aditi Rao on April 18 to push back graduation and hold the ceremony in person, rather than having it online. Over the course of two weeks, it gained over 2,000 signatures.

“After reading the email that informed us about graduation, I was disappointed that the board had decided to go with virtual graduation,” Rao said. “When I talked to my parents about it, they casually said that if I was so upset, I should do something about it. I started thinking, and that is why I decided to start the petition to have [an] in-person graduation.”

Rao said some expressed concerns that there may be no graduation at all if the seniors only had a postponed in-person graduation, with the COVID-19 situation changing daily.  Therefore, they would prefer a virtual graduation for now and the possibility of an in-person event in the future. To accommodate for these concerns, Rao changed the petition name to “In Person FUHSD graduation in addition to Zoom graduation.”

FUHSD conducted a board meeting on April 28 where more than 100 people spoke on the various changes the district has implemented, in light of COVID-19.

“I was able to speak during the [board] meeting as well, and I spoke about virtual graduation and mentioned the petition,” Rao said. “The board members were extremely friendly and open to hearing my perspective, which I appreciated.”

Another email update was sent on April 30 describing the new process for senior graduation, which would include a few senior speakers and the turning of tassels from one side of a cap to another, signifying completion of high school.

Bove sent the latest email on May 8 addressing the possibility of a later in-person graduation.

“While we all want to have an in-person graduation ceremony, we are unable to offer one at this time because of the shelter in place restrictions,” Bove wrote. “The reality is that we cannot guarantee when the COVID-19 conditions will improve. Without knowing for certain when conditions might improve, we wanted to be able to celebrate our students’ accomplishments before they move on to their next venture and phase of life.”

Despite the uncertainty, Bove advises seniors to look forward.

“There are bright spots, or what I would say impactful experiences, that [the situation] has brought forward,” Bove said. “I know that may not seem as important right now, but I believe it will be in some ways life-changing for all of you. But what I would say is look forward, don’t feel like this will negatively impact your life forever. Know that there is great hope. All of you are going to impact the world in very powerful ways that may be even more powerful now because of the insights you gained.“

As the coronavirus situation continues, events will be canceled and plans continue to shift. It is possible that in the future there may be an on-campus Class of 2020 reunion. In the meantime, seniors can still celebrate the memories they have made in high school through the online mediums they have at their disposal.

May 29 Edit: Lynbrook principal Maria Jackson announced on May 28 that due to restrictions on car parades being lifted in Santa Clara County, there would be a car parade for the Class of 2020 graduation at 4:00 p.m. on Thursday, June 4.