The Academy recruits players for the senior game 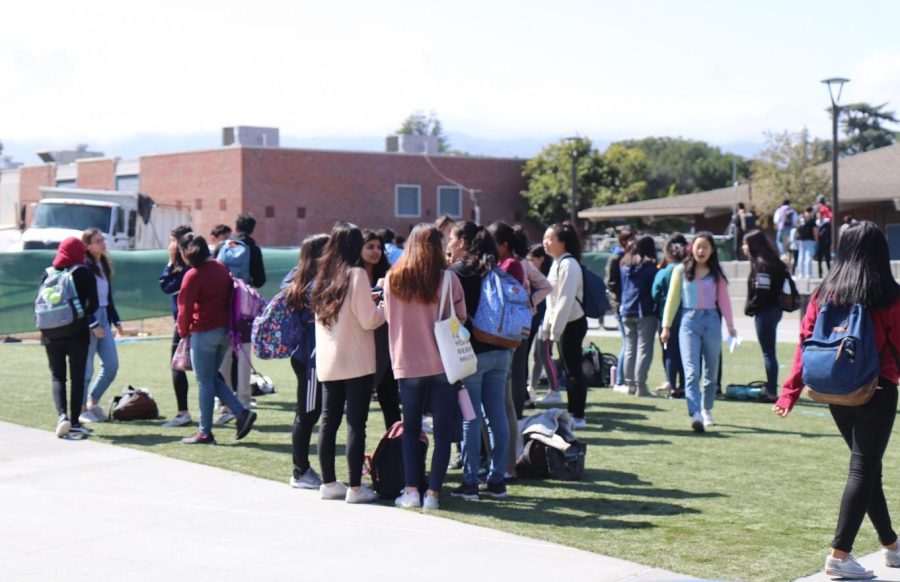 Seniors gather in the quad for the gambit, a chance to either gain points in this year's senior game or have their points halved.

The month of March kicked off with the senior class of 2020 racing across campus in blankets and sunglasses, competing for the chance to win two senior prom tickets. Every few days, the students received an email from “The Academy” and set out to complete the task assigned. While the students participating in the ASB event worked hard to earn points, the officers cooperating behind the scenes worked even harder to keep the game running. However, because of the coronavirus, participants had to change to performing their tasks at home.

“We started [planning] in October, right after Homecoming,” said Class of 2020 Vice President Divya Pereira. “We thought that if the game was going to start in February, we needed to approve it before second semester started.”

The senior game is an annual tradition that takes place during the second semester. Seniors can compete against each other for the grand prize, which are usually senior prom tickets. This year’s game has a spy theme and runs on a points system, with five different ways to earn points: photo opportunities (photo-ops), broadcasts, reports, encryptions and inter-opportunities (inter-ops). Photo-ops are the most common assignment, in which the participant is tasked to send a photo of them doing something to the Academy. Broadcasts require videos to be sent in, and reports involve written assignments in the form of poetry or a letter. Encryptions ask the participant to decode a cipher, and inter-ops instructs the participants to work with others. Every day, three or four assignments that can be completed for points are emailed out to the participants, known as “recruits” in the game.

On Immunity Days, which occur every Tuesday and Thursday, recruits are given special assignments, such as dressing a certain way or holding a specific object. These days provide recruits the opportunity to earn many points; however, if one recruit catches another violating the rules, they lose points. On Assessment Days, which occur every Wednesday and Friday, officers hold short activities during lunch similar to game days.

The class officers plan each of these events and keep track of scoring, sending out daily emails and updating their game website.

The officers expected a lower turnout for the game because of the changes that have been made to it compared to previous types of senior games. However, that did not deter them from designing the game to the best of their ability.

“We think that we struggled to get signups for a week because a lot of the other people you would expect to play the senior game were already talking about doing their own, private senior game,” said senior organizer William Zong. “We ended up getting about 130 signups and 90 people to play.”

As the senior game continued, the class officers saw their hard work be put into action as the participants strived to get the most points, challenging each other along the way.

“The point of the senior game is to unify our class before we graduate,” Pereira said. “It’s to have some fun before we all leave.”

Unfortunately, due to the coronavirus and the school closure, the senior game was unable to continue on campus. However, the officer team worked on a continuation of the game for the seniors, even if it did take place off campus. All of the points were kept, however, the assignments given to the participants changed. The assignments focused more on videos and polls, so that the seniors could continue to play while staying indoors.

Although the game continued into quarantine, many seniors decided to drop the game. On the other hand, others continued to submit videos and engage in the challenges given to them. The prize was changed from prom tickets to a gift equivalent to the price of the prom bids. Some seniors appreciated the officer team’s effort to have the seniors participate at home.

“I think before school got cancelled the game was a little time consuming, but it was still fun, and dressing up to school was incredibly embarrassing but kind of funny,” said senior Angela Steinmetz. “Since quarantine, the officers took time to listen to our feedback as to how to continue, and I think they handled the situation really well. I think it’s much harder to make the game as fun when you can’t see each other, but I still think the officers and William deserve a lot of respect for all the effort they put into the game.”