Commuting via Via Cupertino 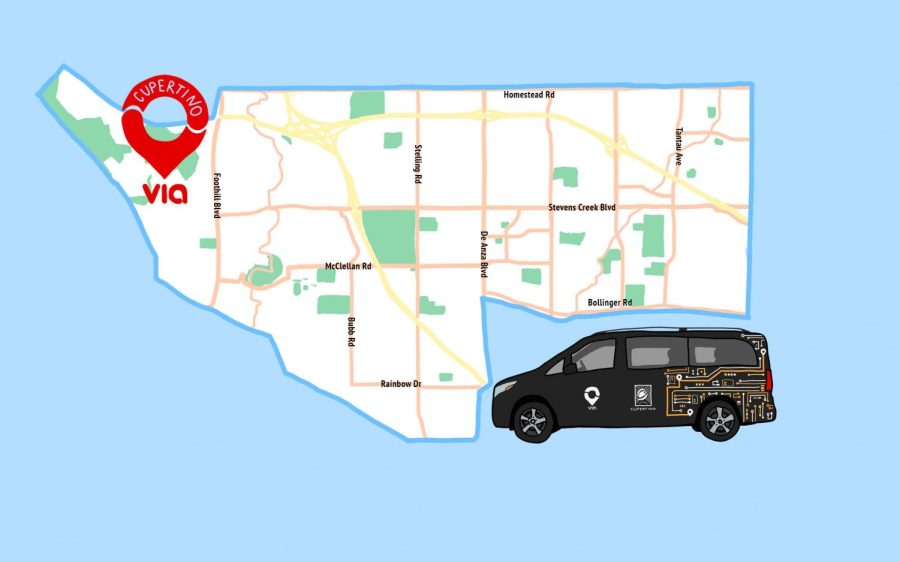 Via Cupertino is an inexpensive alternative to private transportation and ride-shares. Introduced in October 2019 as an 18-month long pilot program, the program is a partnership between private transit company Via and the City of Cupertino in order to reduce traffic in the city.

Via Cupertino was first inspired by a conversation between City of Cupertino transportation planner Chris Corrao and a Via program manager of a neighboring city. Interested, he brought up the idea of collaborating with Via to the City of Cupertino, which recognized Via as a good solution to traffic in Cupertino. The City of Cupertino also received many comments about the traffic congestion in an area by Monta Vista High School.

“The traffic congestion [became] so bad that people started asking if there was a way we could do a shuttle or some sort of transportation to reduce the traffic,” Corrao said. “And so that’s kind of what caused the city to start looking for a shuttle.”

While the main reason behind starting the program was the traffic around high schools, Via Cupertino wanted the program to serve everyone, including senior citizens and commuters. Before Via Cupertino, Cupertino’s main transit option was Valley Transportation Authority (VTA). However, VTA has low ridership, not only in Cupertino, but in all of West Valley, which Corrao suspects is due to the buses not arriving frequently enough to be reliable. Corrao believes that part of the reason for the success of Via Cupertino could be that Cupertino is less densely populated than cities such as New York City, where Via does operate but public transportation is the preferred mode of travel. Because Cupertino is more suburban and popular destinations are more spread out, public transportation options tend not to be as successful, and hence a shuttling service like Via can be more advantageous.

Before beginning to work on the program, the City of Cupertino sent out a survey to find out how many people would use it and how much people would pay for such a service.

After deciding to go ahead with Via Cupertino, Corrao and the City of Cupertino planned for about a year to work out financial details before starting the pilot program. Since then, they have seen unprecedented success.

“It’s actually a lot of work, but it’s been really popular so we’ve been really excited about it,” Corrao said.

Through the analytics dashboard that Via provides, Corrao sees that the most frequent pick-up and drop-off zone of Via Cupertino is Monta Vista High School. This makes sense, as Via Cupertino’s greatest advantages are its inexpensive price and the fact that it is a legal option for minors. Rides cost a flat rate, typically ranging from $3.50 to $1.75 for students, substantially cheaper than private ride-share alternatives such as Uber and Lyft, whose pay-per-mile rides typically cost $10-$20. While minors sometimes opt to take Uber and Lyft, legally they are not allowed to. Another advantage of Via Cupertino is that it is more environmentally friendly than most commutes, as carpooling reduces the amount of single-person trips and impact on the environment, and also more accessible than public transportation.

“The reason people first think of carpooling in order to be more eco-friendly rather than public transportation, especially here, is because our public transportation system isn’t wide-reaching nor efficient enough to replace driving,” said Aileen Mi, an officer of Lynbrook’s Conservation Action Association. “For example, it would take my dad 1 hour and 45 minutes to get to work by bus, while it would only take him around 20 minutes to drive there. Carpooling, then, allows people to both be more eco-friendly while also having a shorter commute.”

As traffic in Silicon Valley gets worse, families in the Lynbrook community can consider among various other commute options whether Via Cupertino may be an option for them.