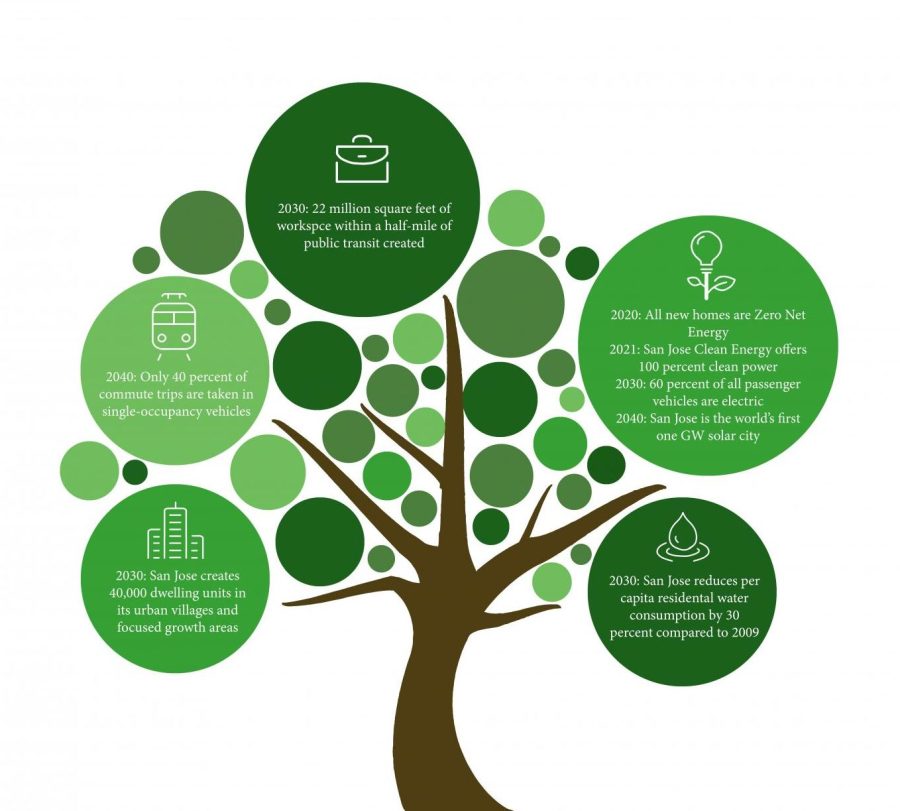 "Everything concerning climate is really urgent. Faster is better, but it is not always achievable without large funding." - Ken Davies, Climate Smart San Jose

While San Jose is best known as the home of technological advancements, it is also one of the leading cities in the effort to combat climate change within the U.S. Despite the stance the Trump administration has taken against the cause, San Jose has translated its desire for an eco-friendly community into action, implementing a comprehensive city-wide plan in 2018 called Climate Smart San Jose. More cities should follow in San Jose’s footsteps in combating climate change.

Climate Smart San Jose aims to expand on a Green Vision plan introduced in 2006 and aligns the city’s policies with guidelines set by the Paris Climate Agreement. Its ultimate goal is to reduce greenhouse gas emissions and conserve water while also fostering economic growth.

The creation of a new plan targeting climate change reflects how San Jose is deeply invested in the preservation of the environment. To prompt its residents to participate in the cause, the San Jose city government has set up challenges to better the eco-friendliness of communities and buildings. For each eco-friendly choice participants make, they are rewarded with points that translate into special recognition and prizes. Other than that, the challenge provides insight into how much money they save. As of February, 259 homes have participated. Owners and managers of commercial, municipal and educational buildings who participate must complete at least two of the three Climate Smart actions offered. These actions include participating in at least one energy or water reduction behavior, performing retro-commissioning or capital improvements in accordance with building requirements and signing up for San Jose Clean Energy’s 100 percent carbon-free energy plan. Climate Smart San Jose has also implemented efforts to engage citizens.

“We have a web platform that provides residents with a selection of over 60 different actions they can take; these can all be sorted from easy to hard and affordable to expensive,” said Ken Davies, director of Climate Smart San Jose. “There are different ways that people can find something that will work for their lifestyle.”

Although it is encouraging to see that the San Jose government is aiming for high goals within a short period of time, the current progress makes the plan seem unreasonable. For example, the challenge offered to residents has only succeeded in reaching 8 percent of its goal of reducing 250 tons of carbon dioxide by June 2020. Despite its efforts to spread awareness about how to contribute to the environmental cause, many residents are unaware of what San Jose is doing to combat climate change. Further, San Jose also faces financial and demographic challenges to implementing the plan.

“The city has to balance its budget and so we have a pretty robust team. Implementing widespread adoption of our plan among communities and our residents is difficult,” said Davies. “San Jose is a huge city, both population wise and geographically so getting that kind of penetration into the community takes a lot of resources and time. Everything concerning climate is really urgent. Faster is better, but it is not always achievable without large funding.”

Nonetheless, Climate Smart San Jose is slowly reducing the amount of pollution the city is creating. According to the progress charts provided by the Climate Smart San Jose project, the number of citizens that carpool is growing, and greenhouse gas emissions as well as residential water use are both decreasing, suggesting that the project is beneficial. Furthermore, the Climate Smart San Jose has the support of San Jose Clean Energy, San Jose’s new electricity supplier operated by San Jose’s Community Energy Department. Additionally, to increase the accessibility of renewable energy, San Jose Clean Energy created energy plans such as GreenSource and TotalGreen, which generate electricity exclusively from renewable sources. Furthermore, San Jose Clean Energy claims that their rates are cheaper than PG&E, an attractive appeal that they say adds up to $3 million in community-wide savings.

Because of the Climate Smart San Jose project, the San Jose government has received a grant and recognition from the Bloomberg Foundation; Climate Smart San Jose can use this funding to achieve its goals. Given the benefits and difficulty to integrate eco-friendly lifestyle choices into society, it is truly incredible to see that San Jose is creating actual result-generating solutions to climate change.