Moving the Oscars into the 21st century 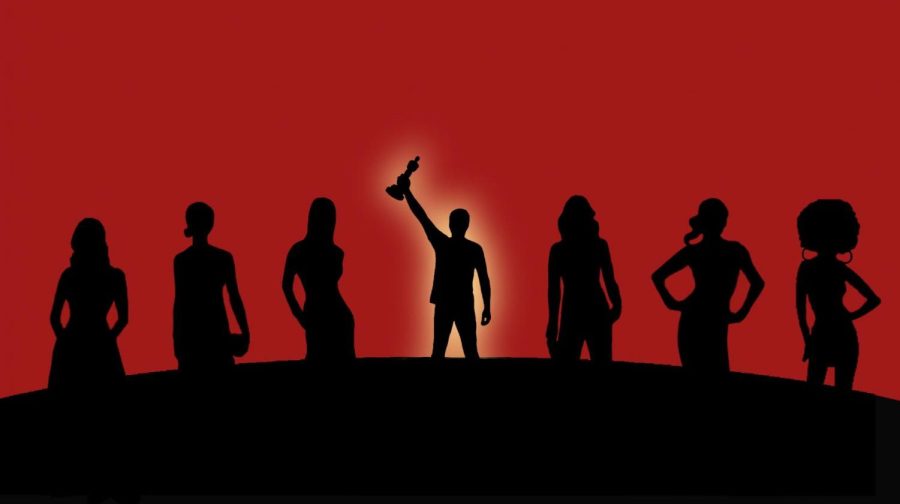 In a lineup movie stars, the only male icon stands in the spotlight while other women are left in the shadows, symbolizing the Oscars constantly leaving out women from receiving recognition.

Over the years, the Oscars have emerged as one of the most prestigious award shows in the film industry. Receiving an Oscar can direct the spotlight onto an underrated director or talented actor to help them get more exposure. Most importantly, though, the Oscars promote movies that are made with passion and talent.

For movies that do not chart big numbers at the box office, collecting awards is an important way to assert their relevance in the movie circuit. However, the Oscars have once again come under fire for omitting several noteworthy women and people of color from consideration. Many, therefore, have declared that the Oscars, among other award shows, are a relic of the past and uphold unacceptable racist and sexist standards. This begs the question: in a time when true artistry already earns rave reviews on the internet, who needs the Academy’s opinion?

“In 1976, we had a limited, shared culture,” English teacher Stacey McCown said. “Today, there are many cultures we can follow, not just the one that the Academy nominates and chooses. In addition, technology and streaming have given us ways to connect with others and publicly share our opinions about the films we see. We don’t have to rely upon a select few in the film business to dictate our tastes.”

Unfortunately, there is a common misconception that the internet has levelled the playing field for all artists. Simply put, this isn’t true. Established directors, actors, and producers — usually white men — get more funding from production studios, allowing them to put together larger teams, receive more press coverage and play their movies in more theaters. These proven artists then make movies about the things they know best: the straight white male experience.

A powerful filmmaker paired with ample resources can lead to amazing results. But since a disproportionate amount of resources are allocated to straight white men, a disproportionate number of movies are made about them. One example is the controversial “Joker.” Detailing the story of a misfit violent straight white man misunderstood by society, the movie received eleven Oscar nominations this year. “Little Women,” a movie about independent women who question society, received only nine.

“I watched both ‘Joker’ and ‘Little Women.’ ‘Little Women’ was great and it does deserve recognition but overall I think ‘Joker’ was the better film,” said senior Anshu Ravi. “Still, there have been a lot of films directed by women this year that deserve at least a nomination.”

Talented straight white men have made some wonderful films and they deserve to be recognized; the problem, however, arises when women and people of color are shunned from these opportunities. They make do with the scraps left over, and still occasionally manage to put together some beautiful films. These movies have lesser-known actors, less prominent release dates, less press coverage and play on fewer screens. Is it such a stretch to imagine that fewer people will see them?

The Academy can help even the odds. When the Oscar for best picture goes to a film like “Moonlight” or “Parasite,” people around the country are suddenly discussing and watching a movie about an abused gay African American man or a Korean social satire. People weren’t watching these movies before simply because they hadn’t heard of them. The “Oscar buzz” around these movies helped get the word out to people that would never have discovered them otherwise. Even though these movies did not have large budgets or world famous actors, the Academy was able to give them a credible boost.

“Although the actual award show is kind of boring to watch, the awards still matter,” said junior Sanyam Ratan. “I know that I would be more likely to watch a movie that wins an Oscar, so it definitely affects what’s on my radar.”

Additionally, the people involved in Oscar-winning movies start getting offers with bigger budgets; they can move up the ladder and make a place for themselves at the table that, for years, has been dominated by straight white men.

“The Oscars are like an art show for films and movies,” Ravi said. “More than being relevant to the common public, I think the Oscars shine within the Hollywood community.”

The Oscars are supposed to be an impartial competition, in which snazzy marketing and big name actors do not matter. These awards are validation for movies that are not cash cows, as the Oscars should celebrate movies made with care and heart. The Oscars serve as a means of professional mobility; therefore, it is heart-wrenchingly cruel for the Academy to lock women and people of color out of the conversation.

“The nominations were a little suspicious,” Ratan said. “But the film industry as a whole is racist and sexist, so I’m honestly not surprised.”

Yes, there are fewer movies made about women and people of color, and there is an even greater lack of representation behind the camera. But when these women and people of color do produce good work, they are systematically denied the recognition they deserve. Jennifer Lopez did not receive an Oscar nomination for best actress for her role in “Hustlers,” and neither did Lupita Nyong’o for “Us.” Both were hailed as critics’ top choices. Awkwafina was not nominated for her role in “The Farewell” and neither was Director Lulu Wang, even though the movie was consistently included in top-10 lists for 2019.

“Awkwafina’s snub is particularly distressing,” McCown said. “I found the film so authentic and moving that I thought about it occasionally for months afterward.”

Similarly, Greta Gerwig was snubbed for her role as director of “Little Women,” even as her insight into the characters and decision to tell the story non-linearly was praised by critics and movie-going audiences alike.

“Though there have been rumors about racism and sexism surrounding the Oscars, I believe that the best film should win,” Ravi said. “Race or gender should not be a deciding factor.”

While the Academy should not award artists solely for the purpose of representation, they would do well to acknowledge the prowess of these artists. As Amy from “Little Women” puts it, perhaps their stories don’t seem as important because no one is telling them. As long as marginalized artists continue to be held at arm’s length, representation of their communities will remain skewed. Only when these talented filmmakers are given the same resources as their straight white male peers will we see an increase of representation in Hollywood. The Oscars could be a fast track for emerging artists in Hollywood — if only the Academy were more conscious about who they handed their golden tickets to. As audiences demand change in Hollywood, the Academy risks being left behind.

The purpose of the Oscars is to recognize, and in turn inspire, good filmmaking. When women and people of color are not recognized for their work, it is not hard to predict that less of them will continue creating meaningful films. By pushing talented creators out of the industry, Hollywood is losing the diversity it so desperately needs in its art.

People are upset about the Oscars because they hold weight in filmmaking, but if things don’t change, people will soon dismiss the Oscars as just another stunt from the entertainment industry. The Academy has the power to reshape Hollywood, but it often seems as though they are choosing not to. When eight out of nine best picture nominations feature white protagonists, people are going to call foul play. When only five women have ever been nominated for best director, people are going to be understandably enraged. Moving the Oscars into the twenty-first century will require taking a long hard look at the implicit bias embedded in Hollywood. It won’t be easy, but remaining stuck in the past is just not an option if the Oscars hope to maintain their credibility and continue to encourage meaningful filmmaking.