Otoshi celebrated as Employee of the Year 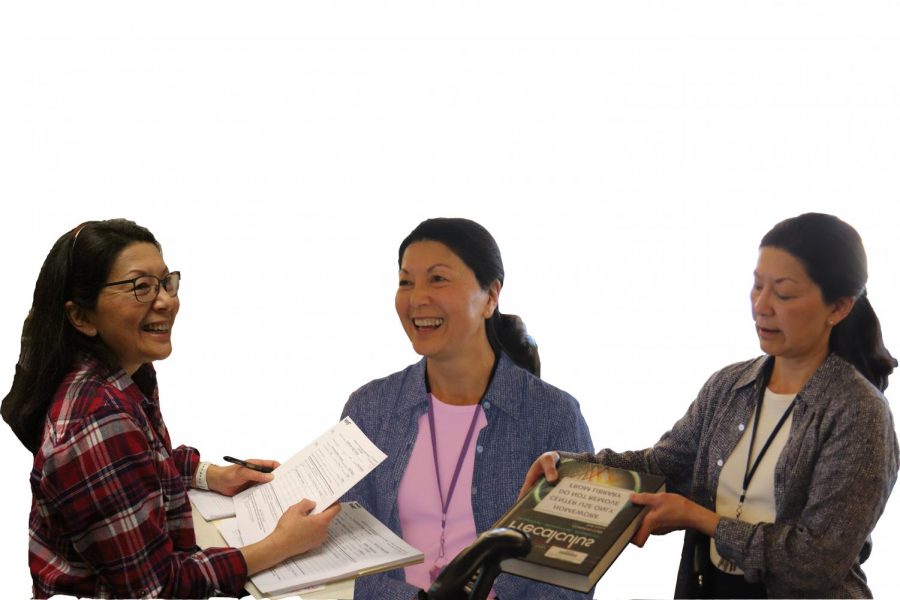 Miko Otoshi, one of Lynbrook’s 2019-20 employees of the year, has served several roles throughout her years at Lynbrook, including has supporting the community by serving on Parent Teacher Student Association (PTSA), chairing the Job Shadow Program as a parent, working for Lynbrook Instrumental Boosters (LIMB) and joining the Lynbrook staff.

Behind the backdrop of the band department, STTAR tutoring program and Homework Center is Miko Otoshi, one of Lynbrook’s 2019-20 employees of the year. Throughout her years at Lynbrook, she has supported the community by serving on Parent Teacher Student Association (PTSA), chairing the Job Shadow Program as a parent, working for Lynbrook Instrumental Boosters (LIMB) and joining the Lynbrook staff.

Growing up in Larkspur, California, Otoshi attended Redwood High School, where she excelled in typing. During that time, skilled and fast typists were scarce, so she used her skills to work as a receptionist at a real estate company during her sophomore year. Every day after school, she would ride the bus for forty minutes to work, putting her clerical skills to use and assisting her family by earning money.

After graduating high school in 1978, Otoshi attended San Francisco State University. Because she was uncertain about what field she would pursue in the future, she spent her six years in college trying her hand at various subjects before deciding on a majoring on Japanese language.

Otoshi worked many clerical jobs after completing her college education. She started off working in San Francisco for Hyatt Hotels, beginning as a secretary before becoming a catering manager. She also travelled to and taught in Japan, where she had her first experiences interacting with students.

“I actually went to Japan for one year, and I taught English conversation at an English school in Matsumoto, a city near the Japanese Alps,” Otoshi said. “I loved it.”

After returning to California, getting married and having three children, Otoshi began working as an art instructor at Meyerholz Elementary School, where her children attended. When her children reached Lynbrook years after, she worked as a substitute at the office’s front desk, served as the Parent Teacher Student Association’s Vice President and worked in the Job Shadow Program as Co-Chair.

“Job Shadow is so close to my heart,” Otoshi said. “It is fabulous that we offer this program to our students, so they can explore career paths before they leave high school. This way, they know what they might like to do or find out what they do not want to do by shadowing a host.”

During her seven years with Job Shadow, Otoshi helped modernize the program by making it more technology-oriented and bringing registration online in the spring. After her children graduated from Lynbrook, Otoshi left the Job Shadow program because she was no longer a Lynbrook parent; however, she did not let that stop her from continuing to serve the community. In 2015, Otoshi officially joined the Lynbrook staff. Unlike other staff members on campus, Otoshi was unique because she worked part-time for LIMB and part-time for the school through the Homework Center and the STTAR tutor program.

Otoshi first found out about LIMB when her daughter played in the marching band at Lynbrook. She realized firsthand that the program was an invaluable part of the school, so she dedicated herself to helping the organization. In LIMB, Otoshi assists Michael Pakaluk, the band and orchestra director, in his duties.

“Otoshi is the framework of the music department,” said band student Richard Chiu. “There is Pakaluk, who does all the conducting and is in the spotlight, and then Otoshi: the machinery behind the scenes that makes the spotlight possible.”

In the band program, Otoshi helps Pakaluk copy music, fill out forms and plan details for trips. Because of her help, students do not need to worry about technical errors in the band program.

On top of her work in the band department, Otoshi also advises the Homework Center after school for three days a week and oversees the STTAR tutor program.

“Otoshi not only manages every Homework Center after school on Mondays, Wednesdays and Thursdays, she works on advertising the program, pairing tutors and tutees and validating all of the hours,” National Honor Society Officer Twisha Sundararajan said. “As a student who has used the Homework Center to study, receive help and tutor others, I can attest to the fact that Otoshi has truly given Lynbrook students the opportunity to excel. The amount of work she takes on to provide students with the opportunity to get access to academic aid and a safe studying environment is truly invaluable. Without her, the homework center would not be possible.”

To recognize all that Otoshi has done for the school, students and parents came together and selected her as Lynbrook’s classified employee of the year, along with another member of the music department, Pakaluk, as the certified employee of the year. Her work at Lynbrook has made lasting impacts on many students, whether it has been through Homework Center or her countless hours spent helping out in the band department.

“For marching band, Otoshi made brownies for all the section leaders while we were huddling in the cold,” Chiu said. “The brownies were really delicious. Otoshi is a really great baker but most importantly a really kind person.”