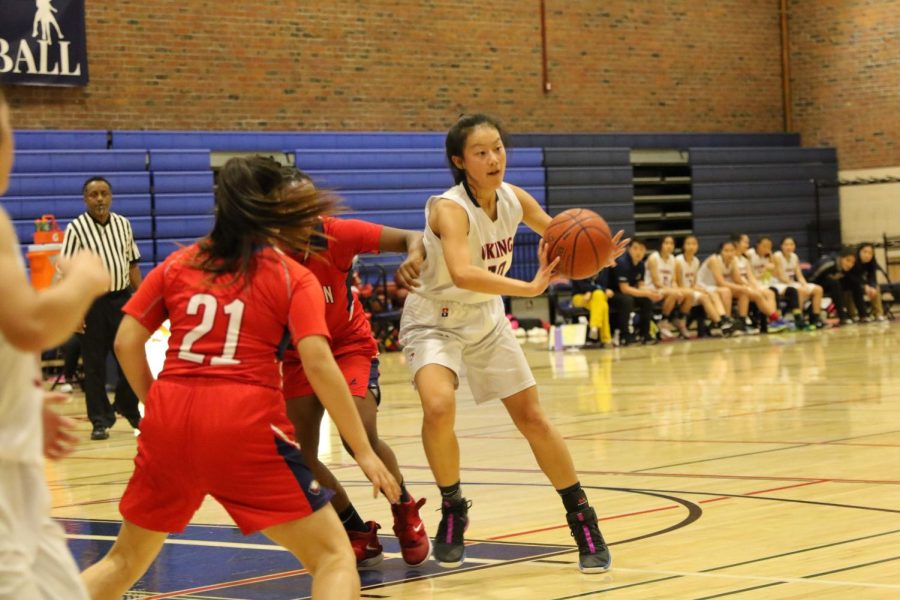 Used with the permission of Jessica Atmadja

Junior Sarah Ho performs a in a home victory against American High School on Dec. 10

Girls and boys varsity basketball teams, in addition to five individuals on the wrestling team, represented Lynbrook at the Central Coast Section (CCS) playoffs, an annual county-wide, high school sports championship, which began on Feb. 21. The girls basketball and wrestling teams carried their momentum from the previous year and qualified for CCS again, while the boys basketball qualified for the first time in two years.  Over the past school year, these teams and players maintained outstanding records that led them to qualify and play with the best teams in the county. Although the teams’ journeys at CCS were short-lived, their perseverance and success throughout the season has made Lynbrook proud.

The girls varsity basketball team was ranked first in both the Santa Clara Valley Athletic League’s (SCVAL) De Anza Division and CCS Division II. Their exemplary records of 11-1 and 21-3 in these leagues, respectively, resulted from many factors that came into play this season.

“Our team has players that can make layups that don’t even seem humanly possible,” said co-captain Jessica Atmadja. “Every time they do it, we still can’t wrap our heads around it.”

Their four-month-long season enabled the individuals’ talents to effectively create a well-rounded team that played in CCS’s Open Division, the highest division in the tournament. Although the team lost their first game at CCS, playing in Open Division also qualified the team for the California Interscholastic Federation State Basketball Championship Regionals.

In preparation for CCS, the team had to cope with difficulties, such as having two injured starters and a shorter average height than other teams in the league.

“All the teams never expected anything from us because obviously we’re not the most intimidating,” said co-captain Lydian Li. “But, when we actually play, and they realize that we’re actually better, it’s really fun.”

At the beginning of the season, the boys varsity basketball team set many goals to improve from the previous season, where they had only won three games. The major goal was to qualify for CCS.

With an 11-15 overall record at the end of the season, the team was able to achieve their goal. However, they had to overcome some significant challenges to do so, such as suffering multiple marginal losses during the season.

“It was heartbreaking to work hard and play well for most of the game for it to fall apart in the final stretch, much less have it happen on multiple occasions,” said senior Aaron Tai. “However, we always moved on from those losses and grew closer as a team because we treated each one of those losses as learning opportunities.”

The team looked forward to seeking redemption at CCS and strategized in preparation. Since the team is primarily made of seniors, there was an added layer to their excitement.

“We’ve treated this season as one last chance to prove ourselves and enjoy the competition while we can,” Tai said. “In many ways, we’re passing on the torch to our three underclassmen as they learn and adjust to varsity basketball.”

The 2019-20 season was the first time freshman Yechen Li; juniors Pranav Chittharanjan, David Heydinger, Isaac Yoon; and senior Guhner McCleve played in the upper division of the SCVAL. Nevertheless, these five varsity wrestlers qualified for CCS, with Li, Yoon and McCleve qualifying for the first time.

“I looked forward to competing again and a shot at redemption,” Chittharanjan said. “I was also looking forward to seeing my teammates compete.”

Although wrestling is largely an individual sport, the impact of the five wrestlers can be seen in the entire Lynbrook wrestling team.

“They are all elite athletes,” said coach Steve Weng. “The culture that they develop in the room is a very loving, caring, nurturing one, and it’s a family atmosphere. It’s heartwarming to watch these kids come together the way they do.”

As the five wrestlers competed at CCS, the coaches and the rest of the team are looking forward to the future of wrestling at Lynbrook. Since freshman Faith Wang is the only girl on the wrestling team, finding more female students to participate is a major goal for the sport, as the coaches desire to create an all-girls wrestling team in the future.