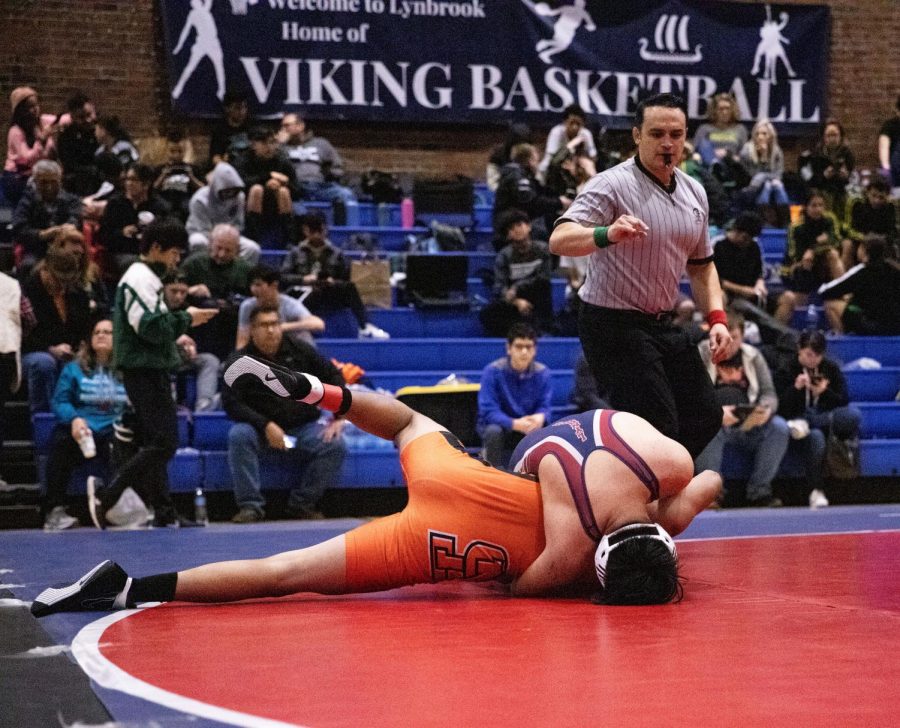 Used with permission of Pranav Chittharanjan

HALF NELSON | Sophomore Nolan Nyugen pins opponent with a half nelson at the JV Lynbrook 2nd Man Tournament.

On Dec. 7, varsity wrestling took ninth overall in a tournament at Half Moon Bay and at Gonzales High School, JV wrestlers placed in the top three, competing against 11 other schools. These results were a strong start to the team’s currently successful season.

“Consistently we’ve had a lot of placers,” said junior Pranav Chittharanjan. “Having Lynbrook, which hasn’t really been a wrestling school, become one of the better schools is wonderful.”

Due to their exceptional performance last year, the team started the season by moving up from the El Camino lower division to the De Anza upper division. The wrestling season began in the first week of November and will end the week before February break. Tournaments, which can involve schools from outside the leagues, began Dec. 7. The Half Moon Bay varsity tournament was the varsity team’s strongest performance so far this season, though they faced tough competitors. Dual meets, which are only between the upper league Santa Clara Valley Athletic League (SCVAL) teams, began a month later on Jan. 9. The team hosted a home meet on Jan. 9, defeating one of their toughest opponents, Gunn High School.

Many wrestlers have worked to meet personal goals this season as well. Chittharanjan hopes to qualify and place for day two of Central Coast Section (CCS), or take first in a high school varsity tournament. So far he has taken fifth in two tournaments, but he is still practicing intensely, looking forward to placing higher in the future.

Freshman Mohong Li has centered his goals more around personal fitness. He wants to get stronger and quicker. So far, he has taken 13 wins and had only 6 losses, but he pushes himself to keep improving.

“Sometimes I just realize I’m not strong enough for the other guy I’m facing, but I always try to push through and use my technique to try to beat them,” Li said.

To some, wrestling is a completely new experience. In the beginning, freshman Faith Wang found it difficult to learn all the different components of wrestling, but soon demonstrated her ability and drive. Wang, the only girl on the team this season, initially joined with her friend, who later dropped out. Wang found it somewhat discouraging, but decided to stay.

“Near the middle of the season, the team and I got super close and now we’re like family, so that helped me overcome that struggle,” Wang said.

Unlike most sports, the JV and varsity wrestling teams train together, so varsity wrestlers can give advice to the underclassmen during practices. Practices start at 4:30 p.m. every day, though the wrestlers can do an optional workout before that. At the beginning of practices, the team does basic conditioning and warms up by jogging, doing somersaults and stretching. The wrestlers then move to drills, in which they practice basic skills like stances and take-downs. The rest of practice focuses on perfecting specific techniques either requested by a wrestler, or decided upon by the coach based on what he observed at recent competitions. Steve Weng, one of last season’s assistant coaches, took over as the new head coach this season. Weng has also worked for almost 15 years with the wrestling team at Miller Middle School, where he mentored many of the current wrestlers.

“For a lot of these kids, it’s a seven year journey that I’m going with them on,” Weng said. “Watching them grow and achieve [as a wrestler] is pretty incredible.”

More dual meets are coming up for the wrestling team on Jan. 30 and Feb. 4, as well as SCVAL League Finals and CCS tournaments later in February. The wrestling team are looking forward to continue training hard and working together to achieve their goals and improve.