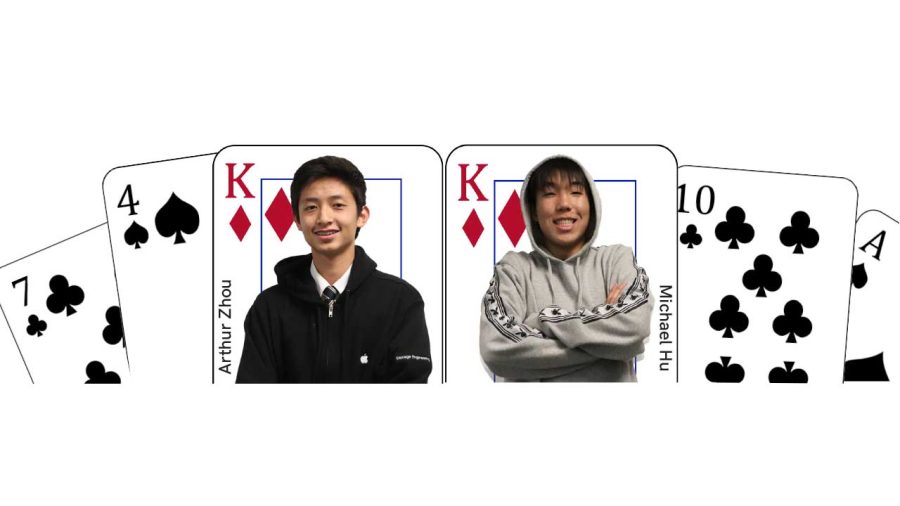 Junior Michael Hu and sophomore Arthur Zhou are teammates who play competitive bridge at an international level. Both Hu and Zhou were introduced to the game by their parents and continued playing recreationally. It wasn’t until they began taking serious classes, they realized that they could also play competitively.

“My mom introduced bridge to me when I was six,” Hu said. “I got really into it when I started to play against my mom and her friends. That was what really prompted me to start playing bridge competitively.”

Zhou also recalls how parent urging boosted his interest in the game.

“My bridge journey started when Michael Hu’s mom encouraged my mom to sign me up for a bridge camp, and after the weeklong camp I was hooked on bridge,” Zhou said.

A standard game of bridge typically lasts for three and a half hours and consists of two teams with two players each. At the start of the game, each player is dealt 13 cards. After the cards have been dealt, players begin to make bids; this part of the game is called the “auction.” To win the “auction,” three players must pass the current bid. Once someone wins the “auction,” the “bridge” part of the game starts. Each player takes turns playing a card and the higher card wins. Winning the four cards in one round earns the team a trick. Each trick earns points, and the team with the most accumulated points at the end of the game wins.

“I usually practice for around four hours a week with Arthur,” Hu said. “Additionally, I take classes every Sunday and watch professional bridge tournaments.”

Zhou also practices every week to hone his skills and get better.

“Playing in all these tournaments really helped me grow as a person,” Hu said. “Not only did I have to learn how to live and take care of myself while I was traveling on my own, I also learned a lot of bridge techniques playing alongside these pronounced players.”

Attending these tournaments has helped Bridge become more than just fun and games . Hu and Zhou have won many significant awards and titles such as representing the USA under 16 division at the World Youth Bridge Championships. They also won the youth pair award in a tournament held in Las Vegas last summer.

As Hu and Zhou continue to earn recognition for their bridge abilities, they plan to attend more bigger tournaments and build the popularity of the game among younger generations just as their parents did for them.

“Bridge is a really fun and interactive game,” Hu said. “Even if it isn’t played competitively, a casual game of bridge with your family or friends can be a great time to bond.”

Zhou believes that anyone can pick up the game of bridge as long as they are willing to put in the work and time to practice. Unlike other sports like basketball where genetics can determine a player’s skill level, bridge only relies on a player’s hard-earned abilities and their complete knowledge of a deck of cards.