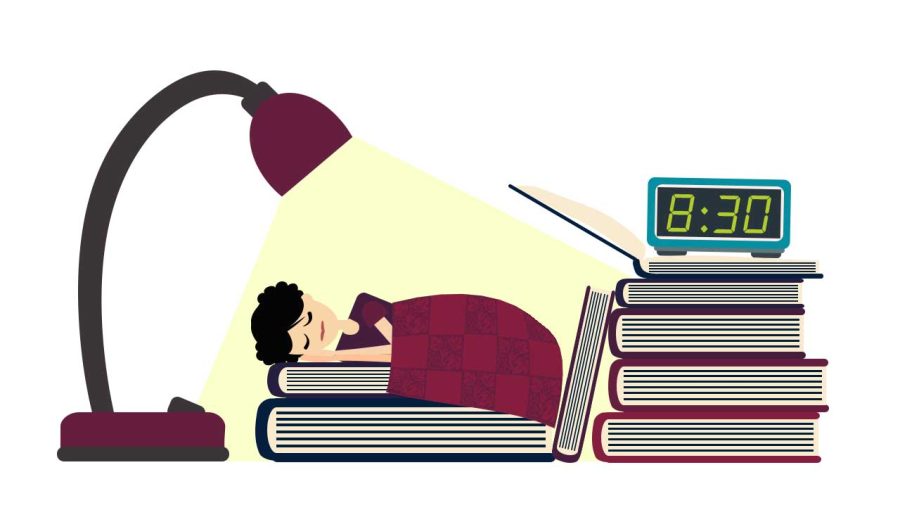 Beginning in the 2022-2023 school year, California high schools will be required to push back start times to 8:30 a.m, but does that equate to more sleep?

Beginning in the 2022-2023 school year, California high schools will be required to push back start times to 8:30 a.m. Though the impact on FUHSD is uncertain, school administrators have begun to discuss the shift while exploring its potential effects on Lynbrook students and families.

On Sept. 13, Governor Gavin Newsom signed the Later School Start Bill, which previous governor Jerry Brown had vetoed. The bill calls for high schools and middle schools to begin no earlier than 8:30 a.m. and 8:00 a.m., respectively, excluding schools in rural areas and those with optional zero-period classes. Evidence shows that students’ physical health, mental health, attendance and academic performance improve when they begin school later. When students reach adolescence, their circadian rhythms cause their sleep schedules to change, and they are more inclined to stay up late and wake up late, a change the bill aims to accommodate in order to maximize student success.

FUHSD administrators are currently unsure how the bill applies to schools in the district. Currently, FUHSD students can choose between two schedules: periods one through six or periods two through seven. Starting in 2018, periods two through seven schedules were changed to start after 8:30. Since starting school before 8:30 a.m. is optional, whether FUHSD schools may be exempt from the bill has yet to be confirmed. Sometime in the next year, the California Board of Education will likely come out with guidelines regarding what kind of schedule will be permissible under the new rules.

“I do like our current system, which gives students and parents the opportunity to choose [between early and later start times],” said FUHSD Associate Superintendent Tom Avvakumovits. “However, the fact that the state might not give us a choice gives me concern.”

Lynbrook students may benefit from getting more time to sleep in the morning. However, some Lynbrook students would prefer to end their school day earlier as opposed to later,  so they can attend their activities or do homework.

“If you think about it, school starting an hour later will push back the whole day’s activities, and students will end up starting homework later and staying up later,” said sophomore Tetsuo Eng.

These changes, if implemented, may end up pushing back students’ after school activities, including athletic practices. With later dismissals, student athletes will have less daylight time for practices and games. However, the bill may help unify athletic schedules across the league.

“One positive could be that if every school had to start at 8:30, all teams would be on the same page about when athletic events start,” said FUHSD Associate Superintendent Trudy Gross.

The administration of San Francisco Union School District (SFUSD) are also having their own conversations about the major revision of schedules that needs to happen.

“We have to take into account schedules, transportation, and after school activities, so it will be a challenge,” said SFUSD Deputy Superintendent Myong Leigh. “However, we understand that the argument for this change is based on scientific research that shows benefits for students.”

Many unanswered questions and possible challenges lay ahead in implementing the new system. Additionally, unforeseen repercussions may occur, however, legislators hope that the bill will  provide teenagers with the opportunity to sleep in, perform to their potential in the classroom and pursue extracurricular activities.