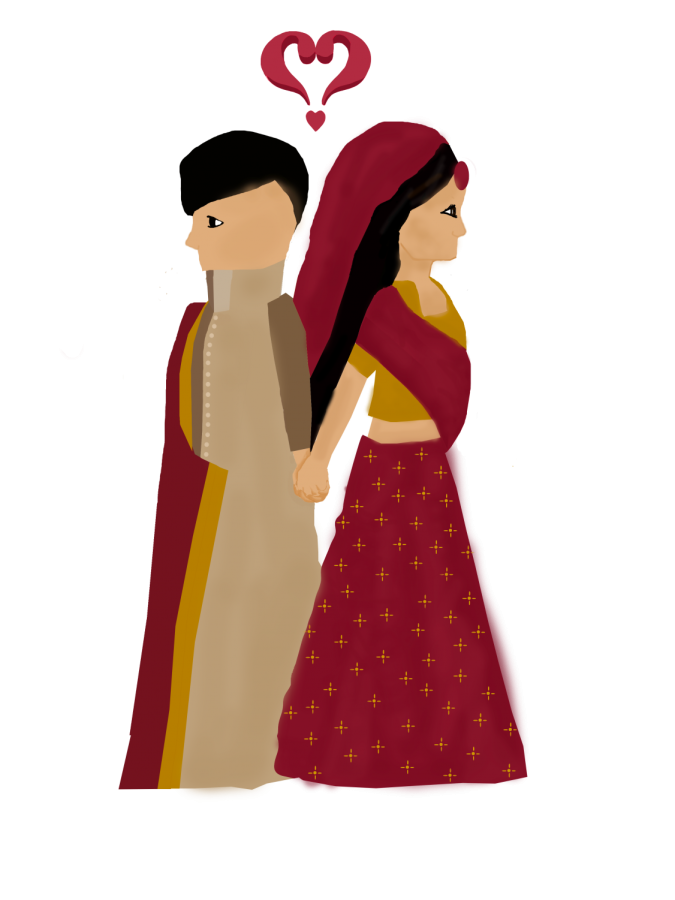 This couple was set up on a date and given a choice as to whether they would like to seal the union, unlike a forced marriage, in which the couple does not get time to familiarize themselves with each other and the family is completely in control regarding the decision

Every quintessential Bollywood movie centers around a love story and often involves a rebellious relationship between two young lovers. They often find themselves in disagreement with their families, and their actions conflict with societal norms. The plot of the movie depicts the young couple fighting for their love and concludes with their families accepting and even encouraging the relationship. However, the prevalence of marriages in which two people fall in love before getting married, commonly known as “love marriages” in South Asian cultures, on-screen starkly contrast with the tradition of arranged marriage.

An arranged marriage is a marital union determined by other individuals, usually family members. The couple is set up on a date and given a choice as to whether they would like to seal the union, unlike a forced marriage, in which the couple does not get time to familiarize themselves with each other and the family is completely in control regarding the decision.

“In arranged marriages, it is not like the people involved haven’t seen each other or don’t know each other before the marriage is decided,” said math teacher Anshul Agarwal. “The families have thought through it carefully; they have listened to different opinions had discussions before reaching a decision, which is made with the approval of the person who is getting married.”

There are various reasons for which a potential arranged marriage might occur. In some instances, the couple’s parents may be good family friends, and have already planned for their children to eventually get married. In other cases, families may put a picture of their son or daughter in a special matrimonial column of a newspaper, which often includes their child’s religion, caste, occupation and other applicable information about the child, in addition to the family’s contact information.  After receiving a response to the advertisement from another family, the two families involved come together in order to discuss the potential of marriage and work out the logistics.

In recent years, many marriages are being arranged through matchmaking websites, which function similarly to dating websites.

Arranged marriages can happen for a variety of reasons which vary according to different  social, cultural, political and economic norms. As a result, people may not consider the idea of a love marriage, even if they do not have anything against it. The thought that marriage is a family matter is also a common mentality among certain cultures. While in Western culture, marriage is considered to be a matter between two lovers, South Asian and Middle Eastern culture generally regard marriage as a union of the spouses’ families, not just the people getting married.

“I like how in Indian culture, marriage is not just between two people but between two families,” said senior Nyna Velamuri.

The tradition of arranged marriage dates back centuries, and  started because families wanted to protect young women as well as ensure that the family honor is kept intact, which remains true to this day. In addition, arranged marriages may occur for religious reasons.

“[When my parents and their families were discussing the potential of marriage], they talked a lot about certain things like religious agreements,” Tanveer said. “I feel like there’s certain ideals each family holds, like religious ideals and social status.”

They can also result from a condition of poverty: when a family does not have enough money to take care of a child, they might arrange a marriage to decrease financial burden. Others receive money in the form of a dowry from an arrangement.

An arranged marriage between two parents can also affect their children. Due to cultural stigmas, many parents may have never dated without the intent of marriage, particularly during their teenage years. This separation may cause children to feel more inclined to hide their dating life from their parents, or feel guilty for dating.

“I think a lot of parents [who had an arranged marriage] don’t understand the idea of dating for experience,” Tanveer said. “They think you should only [date] when you’re genuinely ready to settle down.”

On the other hand, some believe that parents’ marriage has little to do with the child’s inclination to share their dating life with their parents.

“I’m not sure if the parents’ marriage plays a factor in the children telling them if they are dating or not dating somebody,” Agarwal said. “I think a student’s tendency to reveal details about dating to their parents is more based on the bond between the parents and child.”

Since arranged marriages are a common occurrence for many South Asian families, at some students on campus find themselves guilty of making jokes regarding the fact that without an arranged marriage, they would remain single for life. Many of the students who make these jokes consist primarily of those with ethnic backgrounds often associated with arranged marriages. Although the jokes themselves may seem harmless, there are often other effects that arranged marriages can have, both on the couple involved — as well as their children — that may go unnoticed.

“I think people may make jokes like that as a coping mechanism,” Tanveer said. “They use humor as a coping mechanism in general, and in this case people may think ‘I’m gonna have to get married to someone that I haven’t necessarily chosen for myself,’ and to cope with that they make these jokes to convince themselves that ‘[having an arranged marriage] is not that bad.”

Some of these students, especially as they get older, feel a sense of security in knowing that they do not have to find their own life partner.

“I’m [okay with] having my parents find someone for me eventually, it would just depend on the person,” said Vishal Kalyanasundaram, Lynbrook class of 2012 alumnus. “At this point, I’m like ‘yeah, why not?’ I would keep the option if it’s there.”

According to some of these students,an arranged marriage is not as bad as people unfamiliar with the concept may make it seem, and the stereotypes associated with it are frequently not true.

Especially as students grow older and start dating for marriage, they become more open to the idea of having an arranged marriage because of the drama and uncertainty that comes with relationships. With an arranged marriage, people are more likely to have their family’s support, making it the easier option.

“In Indian arranged marriages at least, I feel like if divorce wasn’t such a taboo the success rate would be much lower,” Tanveer said. “Couples often stay together because the marriage was arranged so that they could have a family, and they want to remain together for the family.”

Other students feel less comfortable with the potential of having an arranged marriage and would prefer to have a love marriage, regardless of their parents’ experience.

“I know how to be happy on my own and I would rather not get married than have an arranged marriage and not be happy or be disrespected by [my significant other],” Tanveer said.

Due to the frequency of arranged marriages within the Lynbrook community, some students who have primarily been exposed to arranged marriages are unaware that love marriages have become increasingly common in regions historically known for arrangements.

“When people parents find out that my mom married my brother’s best friend through a love marriage, they are surprised because they are not used to Indian parents having love marriages,” said senior Anika Kanchi.

Although arranged marriages still occur among the Lynbrook parent community, there is an evident generational gap regarding students’ mindset toward these unions. While many parents are indifferent toward having an arranged marriage, students often prefer to have the freedom to decide who they want to spend the rest of their lives with.

“I think having an arranged marriage would take away an aspect of freedom in my life, because as of now, I’d like to choose the person I’d spend the rest of my life with,” said junior Vijaya Kukutla.