Seventeen-year-olds may be able to vote soon 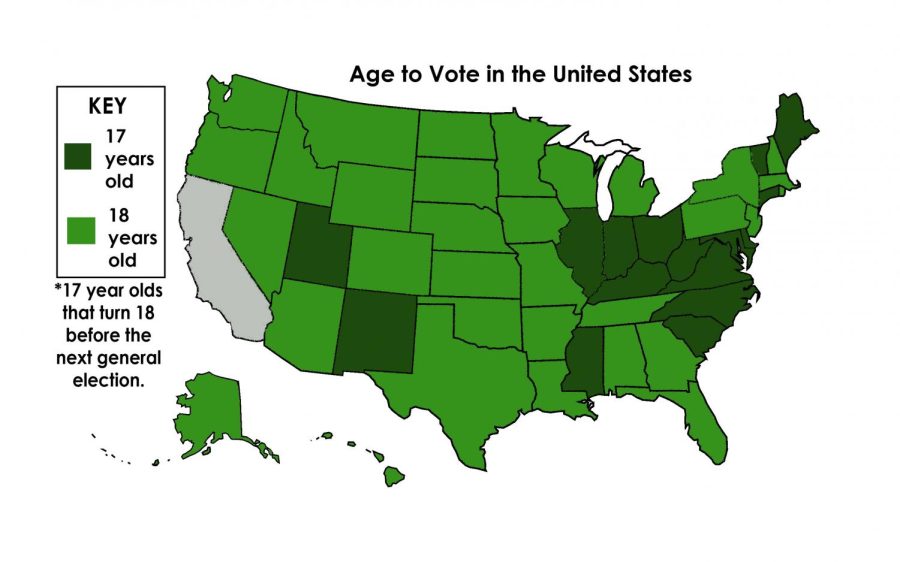 The map shows 17 year olds who will turn 18 before the next election.

The voting age in California may soon be lowered from 18 to 17 under two proposed amendments to the state constitution. If passed, Assembly Constitutional Amendment (ACA) 4 would allow all 17-year-olds who turn 18 before the next general election to vote in primary and special elections. ACA 8 would allow all 17-year-olds to participate in any election.

“My everyday life is just doing schoolwork and listening to my parents and teachers’ lectures,” said senior Grace Huang. “This isn’t how the world is actually like out there, and it shouldn’t be how we spend the first 18 years of our lives and then get thrown into an election.”

Changes to the voting age have been made before on the federal level. After the Vietnam War, the 26th Amendment lowered the federal voting age from 21 to 18 to match the draft age. Now, supporters of this bill reason that if 16-year-olds can drive cars, pay taxes and participate in politics through local governments, they have enough responsibility to vote as well.

“If you have 17-year-olds who are able to participate in government and be youth commissioner for the whole city of San Jose, then why shouldn’t other 17-year-olds be able to have the right to vote?” said junior Ria Chaudhary.

By lowering the voting age, the Assemblymembers hope to create a new generation of life-long voters and politically active citizens.

“I certainly believe in the trickle down effect in high school,” said senior Sanjana Narayanan. “So if we have seniors that are educated and politically active, that means they can influence people who are freshmen. It just keeps going.”

“People are interested in what affects them,” said AP Government teacher Jeffrey Bale. “And if they have the power to vote, they’re going to naturally be more inclined to know what’s going on in those things.”

Both amendments have passed and are now scheduled for a vote at the state Assembly floor in March’s primary election. If passed, ACA 8 would take effect before the 2022 general election.

In 17 states and the District of Columbia, 17-year-olds are already allowed to vote in primary and special elections if they turn 18 before the general election. In Takoma Park, Maryland, 16-year-olds are allowed to vote in city elections. In 2013, the year of the change, teenagers under age 18 voted twice as much as eligible voters did previously.

“It’s similar to how the arc of the moral universe bends towards justice. The arc bends toward including more and more people in our democracy,” said Cassie Mancini, legislative aide to Assemblymember Evan Low.

If ACA 8 passes, California will become the first state to let 17-year-olds vote in general elections, setting a precedent for other states to expand their laws and for America’s youth to become more politically engaged.