FOMO: Are you really missing out?

The role the Fear of Missing Out plays on adolescents 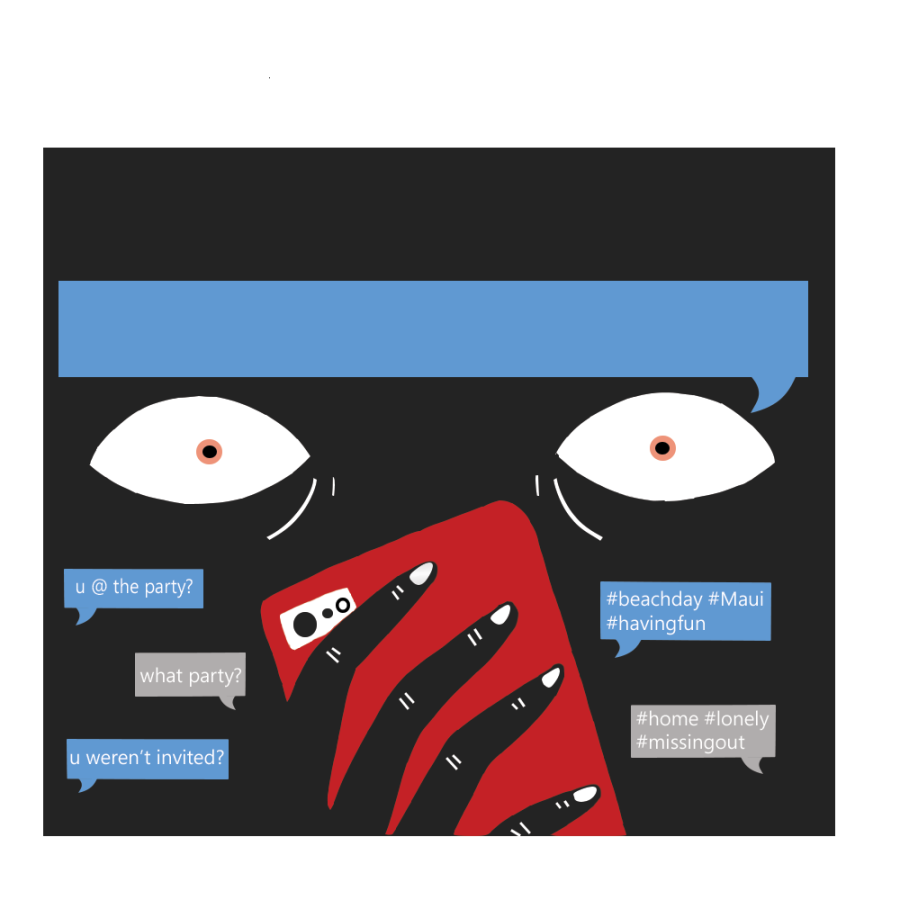 A photo of a friend on vacation, lounging on the beaches in Hawaii, and another zip lining through the tall trees in Costa Rica. A quick click of a group of friends having fun together, ordering food at a restaurant or just spending quality time at someone’s house. These simple things that show up on our social media feeds have become an integral part of daily life. However, they can invoke paranoia in others. This effect is widely known as the Fear of Missing Out (FOMO).

FOMO can be brought out by other underlying causes, such as anxiety or feelings of shame or inadequacy. For those who are more insecure about their social status as well as their overall reputation, seeing pictures of their peers may deepen those negative emotions. They can feel ashamed about themselves, and often feel that they should be working harder to appear more amiable. All humans have the innate desire to belong and fit in, explaining why FOMO plays such a key role in how people behave throughout their daily lives.

“Our feelings are not facts, but they can feel like facts,” said school psychologist Brittany Stevens. “Especially since humans are pack animals, the feeling of being left out can deeply affect many people.”

With the proliferation of portable electronics and expansion of social media application usage, FOMO has become a growing problem. People who experience FOMO are likely to value their social media as an indicator of their social success through the number of likes, comments, tags in others’ photos and followers they have. FOMO has been found to cause greater use of social media, as people find it a convenient access point to see what their peers are doing.

“I know of teenagers and adults that have had to delete all their social media accounts because their obsession with seeing what others were doing became unhealthy,” Stevens said.

The degree to which FOMO affects an individual can predict the social networking service they prefer. The growing popularity of Instagram has been attributed to its effectivity in communicating one’s ideal self-presentation through pictures rather than words. In 2015, the most popular social media platform was Facebook, followed by Youtube, Twitter and Instagram.

Teenagers’ use of a variety of social media platforms may provide relief for the anxiety of being unaware of what others are doing. A study by Saleem Alhabash, associate professor of Public Relations and Social Media at Michigan State University, surveyed college students on the intensity and motivation behind their use of several social media platforms. While on Facebook, Instagram and Snapchat, a user’s online followers or friends overlap with their offline affiliations. However, with platforms such as Twitter and Youtube, content has become viewable by larger audiences. As a result, more personal social networking services, such as Instagram and Snapchat, tend to serve as a greater relief for FOMO and are more widely used by teens with FOMO. However, some of these applications have also started experimenting with features to lessen the effect of FOMO. Instagram is currently beta testing a feature that would allow a user’s likes to be viewed only by themselves.

“A lot of times during breaks when I stay home, I see pictures through social media of my friends doing all these cool things on vacation and I feel sort of jealous, or I wish I could be doing something more fun,” said sophomore Sahil Bhatia.

“I do not think anybody posting these pictures has malicious intent, but sometimes, it just turns out that way,” Stevens said. “In a way, they are also susceptible to FOMO because many students post to show others that they are not being left out.”

FOMO has also been known to affect the financial stability of individuals, particularly millennials. “FOMO spending” can occur when an individual caves to peer pressure to make a purchase despite lacking the money to support it, in fear of missing out on a social experience, losing friends, being judged or feeling like an outsider. On behalf of Credit Karma, Qualtrics conducted an online survey of 1,045 U.S. consumers between the ages of 18 and 34 during February and March 2018 and found that almost 40 percent of millennials have gone into debt for the sake of keeping up with their peers. Most often, the spendings proved worthless, as two-thirds of the consumers experienced buyer’s remorse, the sense of regret after making a purchase, when they had spent more than they intended in a social situation. FOMO spending can be difficult to avoid, since 27 percent of survey respondents felt uncomfortable declining a friend’s suggestion of a purchase or activity that they could not afford.

FOMO, often referred to as a joke, is a phenomenon that can have serious consequences. It has been made even more prevalent due to the rising popularity of sharing the best aspects of life on social media. The weight of FOMO’s impact on people has been shown to be more than a joke, since it can deeply influence the way people view themselves and the image they project to others.