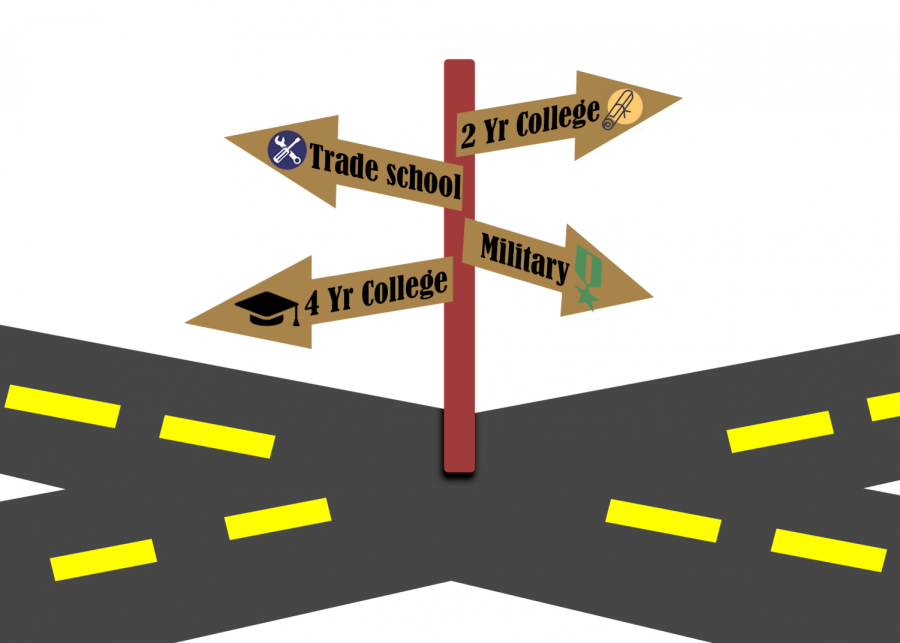 Although Lynbrook boasts an 84 percent rate of students who attend four-year colleges after graduating high school, according to its 2018 school profile, students take many other paths after they toss their graduation caps. From trade school to two-year colleges to work experience, these overlooked options offer unexpected advantages to students seeking alternatives to a typical post-graduation experience.

Four-year colleges are often the idealized goal after graduating high school. Parents and peers often reference college rankings, lists of famed universities with acceptance rates below 10 percent and supposed GPA cutoffs. Four-year colleges can generally be separated into two categories: research universities and liberal arts colleges. Both have their advantages and disadvantages — attending a research university can often mean larger class sizes and more academic resources, but also more postgraduates and teacher assistants teaching students while professors work on their research. Liberal arts colleges, on the other hand, tend to offer a broader education and less specialized degrees, but professors are not pressured by the need to deliver research results for tenure and can interact more with students.

The 2018 school profile shows that 9 percent of Lynbrook seniors choose to go to a two-year college after graduation; many of these students then transfer to a four-year college later on. Though choice in transfer school varies, requirements for transfer often include maintaining a high GPA and connecting with teachers for letters of recommendation.

“If you go to community college, you have to be really self motivated,” said senior Brian Ruan, who plans on attending community college as he enters the real estate field. “If you don’t take enough classes or you aren’t motivated enough, you’re going to be there for more than two years.”

However, those planning to stick to community college might find other benefits beyond low tuition. Two-year colleges, like DeAnza College, West Valley College and Foothill College, often help students looking for earlier entry into the workforce, as they do not require students to be full-time students, allowing for more time to work. These colleges also often teach specific skill sets, allowing employers to better understand students’ abilities based on their specific community college curriculum.

“There are plenty of universities where you’re going to get an awesome education that aren’t top ten Ivy League schools,” said history teacher Steven Roy. “There is absolutely nothing wrong with going to De Anza and saving yourself 200 grand, and honestly getting a better education and more one-on-one opportunities to work with professors than you would at a lot of big name universities with 400 people in a lecture hall versus class sizes of 30 students.”

Trade schools are another efficient way to enter the workforce and begin a career earlier. Many trade schools teach specific skill sets and offer practical job experience, as opposed to the more theoretical studies that a four-year college provides, but graduates are often limited to one field when searching for jobs. However, trade schools still provide many of the degrees that non-vocational schools offer. Many students go to trade schools for nursing, mechanics, paralegal studies, engineering, animation and other fields of study.

“Trade schools are a great fit for students who like to work with their hands who like to see tangible results in their work, who may not enjoy the classroom environment,” said College and Career counselor Barb Takahashi. “There are excellent trades that pay well and provide successful and enjoyable careers for students.”

Other alternatives include taking a gap year, studying abroad or working after high school to build up savings, prevent large student loan debts or have a new experience beyond traditional schooling. Gap years allow students to reassess their goals in life, plan how they will spend time in college, or take a break from the academic environment while saving money.

“I felt very lost coming out of high school: I didn’t know what I wanted to study; I didn’t to know what I wanted to do in my life, you know, all those questions,” said alumni Will Shan, who took a gap year after high school. “It’s like, ‘Maybe if you took the year off you could both become the person that you want to become and find more of your identity, the journey to self-discovery, and you could use this leverage it in a way to better spend your time college.”

Studying abroad provides a repose from school, helping students broaden their worldviews and reflect on their lives, while work provides financial independence, allowing students to get a taste of the real world.

“Going into real estate, there’s no pay,” Ruan said. “You’re self employed; you’re basically the contractor, so there’s no salary, and no one’s telling you what to do, so you have to be really self-motivated and learn [on your own].”

“The types of things that students do in gap years can vary significantly,” Takahashi said. “But the key is to get approval, if you’ve already been admitted to in college is to present a plan that can be approved so that they will defer your acceptance to the following year. Generally, you don’t take courses, it’s a year for you to explore other things about the world that could involve just working a job or starting a business, or traveling overseas and volunteering anywhere. It’s a chance to take a break to reassess your goals in life.”

“So I brought it up [with my parents] a few times,” Shan said. “Then the way they found out that I kind of officially decided to take a gap year was in that senior spread of the year that the Epic puts out that has where all the seniors go to college. I had put down my university and the current class of 22. And I guess I hadn’t had a formal conversation with my parents prior to that; I kind of dropped it. But somebody else, like another parent, I’m sure, took a photo and asked, ‘Why isn’t he going?’ to my parents, and then they kind of pulled me aside and asked me about it. So they weren’t initially supportive of it. But I was able to convince them. My brother really helped but I was able to convince them with his help, and they let me let me do it. And they had their reservations for sure. They thought I wouldn’t go back to college, they thought it’d be a waste of time, all that stuff. But they actually came around to it, and about half-way through my gap year they were really supportive about it. They were like, ‘we definitely see how this is the right thing for you.’”

It is easy to get caught up in aiming to attend a big-name university that looks good on one’s job resume, but the choice should ultimately boil down to what one wants to be.

“Having been to my 10 year high school reunion a few years back, I met a lot of sad engineers, and it was like, ‘Wow, sure, you have a really good salary, but you just look so unhappy and you work 80 hours a week,’” Roy said. “That’s not really life. Do you want to work to live or do you want to live to work?”

Higher education and continued learning remain the priority of many graduating Lynbrook students. However, it is up to each individual to mold the way in which he or she achieves this education to fit his or her own goals. The pathway that works for one student may not work for another. Whether a student chooses a four-year college, two-year community college, trade school, work experience or something else altogether, there are extensive opportunities for someone to prepare for the future.