How supporters should advocate for the LGBTQ+ community 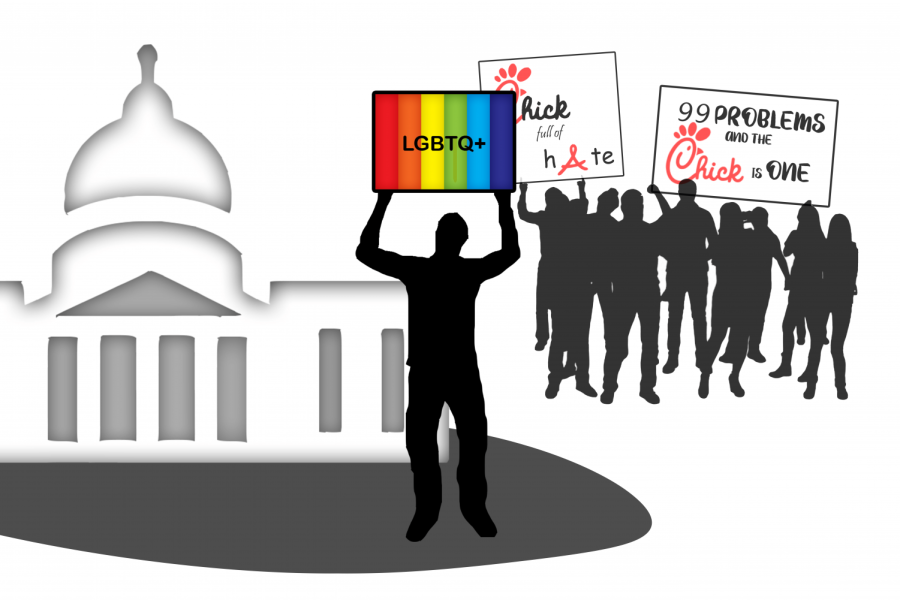 With more than 2,200 locations nationwide, fast food company Chick-Fil-A has a massive customer base, yet even the popularity cannot hide its homophobic stance. In 2014, Chick-Fil-A CEO Dan Cathy made a public statement expressing his disapproval of the LGBTQ community, saying that it would “face the wrath of God.” The company and spokespeople from the Cathy family have made statements that Chick-Fil-A does not share these views. Despite these claims, however, the Christian-associated corporation has prominently displayed its anti-LGBTQ stance.

Recently, various media outlets revealed that through its WinShape charity foundation, Chick-Fil-A donated a total of $1.8 million in 2017 to charities associated with anti-LGBTQ sentiments such as The Salvation Army and Fellowship of Christian Athletes. As a result of Chick-Fil-A’s homophobic stance, the company has lost out on major deals with New York’s Buffalo Niagara International Airport and Texas San Antonio International Airport and has received major backlash through online and in-person boycotting. However, the protests against Chick-Fil-A have not been enough to inspire change within the company in favor of the LGBTQ community.

Consequently, protests have escalated, with many vandalizing stores, taking to the internet to voice their outrage at the corporation and boycotting. Although such actions are helpful to the LGBTQ cause, they do not serve much purpose or significance if unaccompanied by continuous advocacy for the LGBTQ community. Rather, these petty and unimpactful protests only serve to trivialize LGBTQ civil rights.

After news broke of Chick-Fil-A losing out on big airport deals, social media users shamed the company, with some proclaiming they would never dine at Chick-Fil-A again. These online protestors carry good intentions, but their actions ultimately do not make much of an impact on advancing the LGBTQ civil rights cause; social media can spread awareness, but it does not necessarily spur action. In small actions like objecting to eat at Chick-Fil-A, the cause itself is trivialized, turning supposedly helpful boycotting into something ineffective at making a difference because the boycotters take action without being truly educated about LGBTQ civil rights. In truth, there are plenty of more impactful actions than boycotting that bring greater progress to the cause. A lack of civil rights initiative is not something that can be solved with mere social media campaigns, as change requires deep involvement and advocacy, not just exposing people to the existence of a problem. Social media advocating may not be in-depth enough to cover a look into the movement, therefore making it even more important to stress the significance of educating our peers in order for them to be equipped with the tools of education to advocate and allow them to take action.

“I feel like this whole bandwagoning attitude of boycotting polarizes society. In a way, it is important to get ahold of your belief, but you should know the extent to which when you get mad, the real issue kind of totally disappears,” said junior Arushi Gautam.

In the past, momentous changes have come from continued advocacy. The last monumental movement for civil rights in the U.S. was the civil rights movement led by Martin Luther King Jr. in the 1950s and 1960s. In an effort to call for the enforcement of constitutional and legal rights for African Americans, the movement struggled for a long 14 years. Although LGBTQ civil rights have made major strides, none of the efforts being put in place now are as serious as those of previous civil rights movements like those of the 1950s and 1960s. It was the tenacity and spirit that the participants of the civil rights movement had that ultimately paved the way for the movement’s success. The efforts of the Chick-Fil-A boycotters pale in comparison. The realistic effect of the boycotting is only removing customers from the consumer base. In addition, new supporters are beneficial, but if they fail to properly educate themselves, the movement becomes more of a social media trend than a movement spurring actual change.

And the Chick-Fil-A boycotts may quickly lose the public interest that arose primarily due to exposure from scandals. Periodic bursts of attention with long periods of silence afterward make it hard for sustained advancement of LGBTQ rights and acceptance to occur. For a cause to be successful, methods of activism must be changed to encompass bigger actions, like advocating for new legislation, as well.

“Advocating does have to be sort of a lifestyle change the same way that you stop using single use plastic bags when you go grocery shopping because you care about the environment and you don’t want the degradation of the environment to keep on happening,” said Gender and Sexuality Alliance adviser Jessica Lu. “It is a similar thing with advocating for LGBTQ rights, you have to kind of make that decision over and over again and that is part of it. The more you kind of choose to take the same stand over and over again, the more your impact on it gets compounded.”

It is crucial for those who care about the cause to be on the front lines, not behind the screens. While boycotting Chick-Fil-A reduces the profits of a homophobic company, it fails to provide the continuous resistance necessary to spark legitimate change.

“If you’re just a bystander, you are delaying the issue more. Right now, mostly only LGBT rights pages care about Chick-Fil-A,” said sophomore Amy Sun. “The mainstream media doesn’t care. Mainstream media is focused on other things like politics, so when it comes to these [issues like LGBTQ rights], even if it doesn’t affect you, you should be helping out in some way.”

The solution is clear, but it can be hard to commit. For one, protesters must actively participate to actually impact a cause like LGBTQ civil rights. One does not have to attend every single event, but can start by being a true ally to the LGBTQ community. Allyship takes many different forms, but people treating the Chick-Fil-A movement as a social trend instead of a call for action is not one form of genuine support. Although society has become more open-minded and liberal in this era, anti-LGBTQ sentiment is still widespread in America and the rest of the world. The recent Chick-Fil-A scandal only serves as a reminder and symbol of the existence of anti-LGBTQ support. Only further revised efforts in response to the Chick-Fil-A scandal could change the boycotts from a social media fad into a significant movement with long-term results.