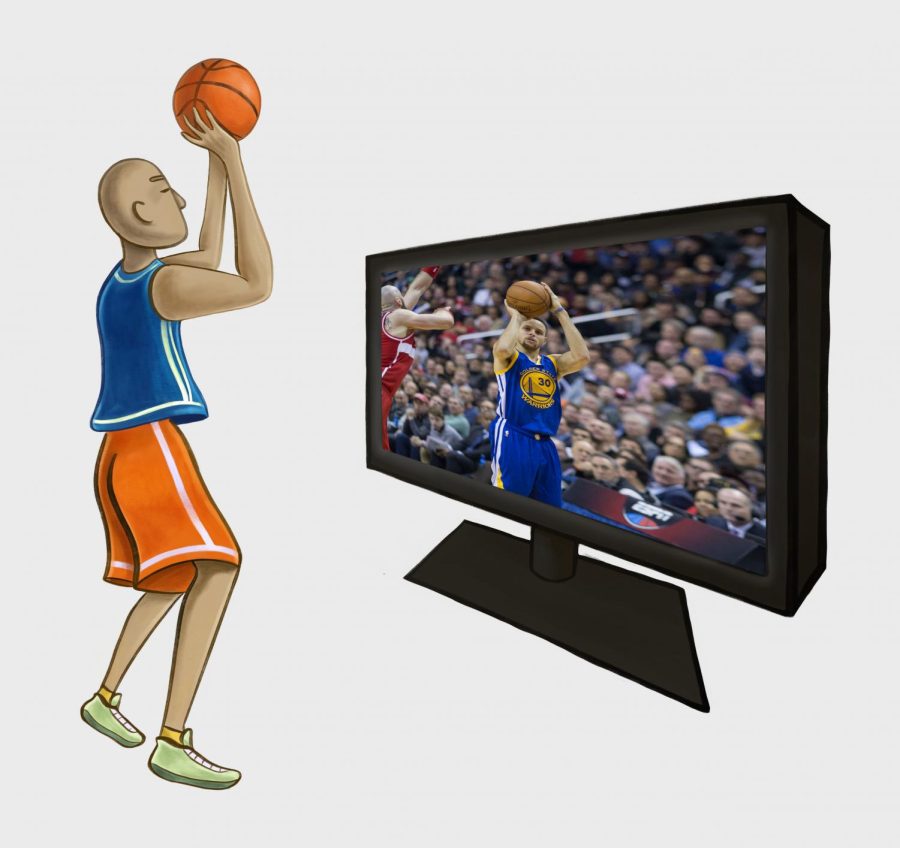 The ball speeds across the screen, aiming straight for the goal as the remaining players sprint to catch up to the player who kicked it. The TV speakers blare with the crowd’s cheering, and senior Kiana Hatam turns down the volume as a commercial starts. She picks up her laptop and types some notes down about the game and the various techniques the athlete used.

To improve their own performance, many student athletes watch professional athletes play their sport, observing skills and techniques that allow them to be successful in the game.

“When I play soccer, I only see the field from my perspective, but by seeing a game being played from bird’s-eye view, I can look at the game from a different viewpoint,” said senior Kiana Hatam.

By watching top athletes in action, viewers can recognize and learn certain skills that professional athletes have obtained over the years, which they can then apply to their own play.

“When I played in college, there would be a whole team specifically for video editing, just for that sport and just for that team. The team would edit the game film, break down the highlights and showcase the plays of the game that went wrong,” said athletic trainer Kathryn Thurman. “Let’s say for baseball, specifically for a batter’s swing, sometimes when they’re in a rut, it’s good for them to hit off a T, have it filmed, then break it down in slow-motion and real time to see what modifications they need to do with their swing. For example, with field hockey, you need it to put your body in a certain position to hit the ball well, if not, then in a video you can see what they did wrong and critique it and compare it to another video that’s online.”

Senior Nicole Waring has participated in track for six years. Watching her events on TV, such as the 100 meter hurdle dash, 4×1 relay and 300 meter hurdles, allows her to see her favorite athletes compete, while comparing her own techniques with theirs, which helps her improve a runner. She looks up to various athletes, such as Sydney McLaughlin, the youngest track and field Olympian since 1972, who motivates her to challenge herself at practice everyday.

“As a hurdler, form is fairly important,” Waring said. “I’ve been able to alter my technique accordingly after watching other athletes, whether it’s paying more attention to keeping my arms in or getting my trail leg down faster. Suddenly, you become the spectator rather than the competitor, yet your background knowledge allows you to potentially analyze it from a different angle.” 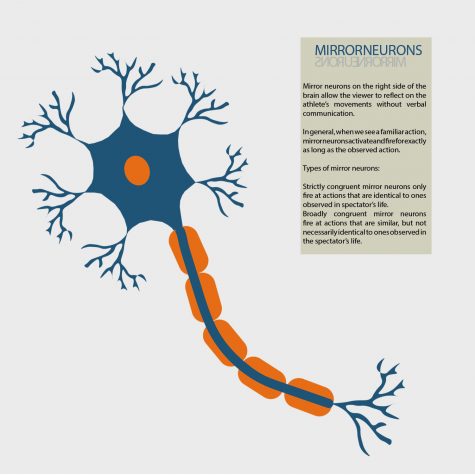 In a study conducted in 1990, a group of neurophysiologists recorded electrical signals from a group of neurons in the monkey’s brain. The monkeys reached for pieces of food after the monkey saw a person pick up the food as well. The phrase “monkey see, monkey do” came from when the neurophysiologists observed that when one monkey did something, the other watched and did the same thing. Mirror neurons play a huge role in understanding not only one’s physical actions and speech, but also their minds and intentions. The mirror neurons in the monkey’s brain are also what allow viewers to comprehend what is on their screen.

In general, watching a sport familiarizes viewers with the sport, building confidence and allowing the individual to set certain goals to potentially achieve the level of play of a professional athlete.

“Every time I watch football on TV, I pick up a thing or two, and I’m able to apply what I learned into my play,” said sophomore Edward Wang, who plays football. “It gives me a new perspective on the game as well.”

Watching a professional play the sport that one plays helps the viewer familiarize themselves with the actions and skills needed, which helps to build confidence in the players. The viewer is able to familiarize themselves with the specific actions and believe in their own skills. Watching another athlete be successful and play well mirrors into the viewer’s mindset.

“From watching TV, I have learned what I should and should not do,” Hatam said. “It has also taught me the power of standing together and what can happen if I put my mind to it.”

In conclusion, being able to view and imagine one’s performance allows athletes to mentally and physically prepare themselves for upcoming games and set and achieve specific goals for the next season. The mirror neurons allow athletes to observe what is on the screen and implement those movements into their own.

“It sparks conversations with other people, I feel like sports are something almost everyone can relate to,” Hatam said. “It brings people together and starts friendships. Watching sports also makes me want to be more active in my life, so it pushes me to work harder.”