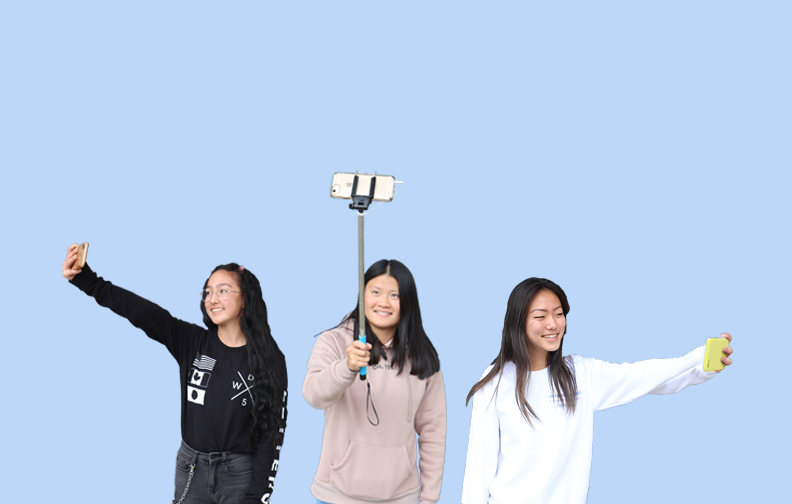 Vlogging has become an integral part of internet culture, with millions of people following their favorite influencers as they go through their day-to-day activities. Vlogs are a form of video documentation where people record their lives and post it on the internet. YouTubers share their lives with subscribers, filming activities ranging from something as small as their daily routines to preparations for award shows and trips. Read on to find out more about Lynbrook’s very own selection of incredibly talented vloggers.

Sophomore Evan Liu started her YouTube channel during the summer of 2018 with a few friends from her club softball team. Liu and her friends Elise Oswald, Gabby Bolanos and Molly Mobley always joked about becoming vloggers and eventually took the leap, turning their jokes into a reality. Their channel name, The Icons, originated from the name of their group chat.

Creating a YouTube channel gave the girls a reason to spend more time together.

“When we started posting, we got even closer, and we got to share a lot of things with each other that we wouldn’t necessarily talk about during softball,” Liu said. “The fact that I have such a great bond now with Elise, Molly and Gabby, is really rewarding.”

While Liu’s parents did not really think much of her vlogs, her little brother, Elliot, was ecstatic about the idea of her becoming a YouTuber. She also earned the support of the rest of her softball team. They fully supported their teammates’ decision to start the channel, keeping up with and watching new videos. Liu, however, had a harder time showing her friends at school that this channel was something worthwhile.

“Some of my friends at school thought it was really childish and didn’t understand why I would want to do something like that,” Liu said. “I learned that what they say doesn’t really matter because I’m having fun.”

Vlogging has helped Liu gain more confidence and care less about what other people think about her. When she first started her channel, she was afraid of harsh judgement from her peers or hate comments, which caused her to feel insecure about posting.

“A boy told me that he saw my video, and he started laughing at me and told me that I looked so ugly in the video and that I would never be successful,” Liu said. “He also called Elise and me some really nasty names that made me feel insecure about posting.”

From vlogging, Liu has been able to learn to overcome the weight of other people’s opinions and focus on activities that she enjoys. This lesson has stayed with her and inspired her to take up other projects that she previously avoided due to fear of others’ opinions.

“Vlogging has taught me to be less scared of what other people think,” Liu said. “For example, it inspired me to make an account on Instagram that showcased my various outfit ideas.”

As Liu continues on her vlogging journey with her best friends, she is learning how to be more confident. Vlogging has proved to be an incredibly rewarding experience for her, as it has given her stronger bonds with friends and a new outlook on life.

Junior Jessica Chu has been vlogging since she was in eighth grade, occasionally posting vlogs detailing exciting events in her life. She was first inspired to start her channel by watching those of other YouTubers. Her channel became the perfect way to combine her interests in creating content and video editing, while simultaneously documenting memories with her friends.

“The most rewarding part about my experience with vlogging is that I get to do what I love and make memories with my friends,” said Chu.

Chu’s friends have also been very supportive of her channel and are always there to watch, like and comment on her videos.  It has also served as an important learning experience. Through vlogging, she has learned how to use iMovie to edit her videos and stitch together shots she takes on her iPhone and GoPro.

However, the thing that Chu cherishes most about the experience, is the way it allows her to document her memories and important events in her life. They range from vlogs of swim meets and vacations to doing YouTube challenges with her friends. Vlogging allows her to save these moments and document them for later.

“The thing that I like most about vlogging is the fact that in 10 years or whenever it might be, I will be able to look back at all the videos and memories I made and see how I was back then,” Chu said.

This activity that merely started out as a way to pass the time, has evolved into one of her many passions. Vlogging has been a learning experience that allows her to improve her video editings skills and finding new and interesting content to interest her viewers.

For senior Selena Jeong, vlogging her experiences has come to be more than just a simple way to pass the time: it serves as a means for her to document important moments in her life, memories shared with the people she loves.

“Vlogging has always been a personal project, and if I find myself looking back on my older videos, it’s really fun to just relive the moments,” Jeong said. “Those are my memories, and it’s my vlog, for the people I love, with the people I love.”

Jeong started vlogging in January 2018 as a way to avoid boredom during winter break. Taking inspiration from other vloggers on YouTube, she set up her own channel on the platform, creating videos in which she documented her day-to-day life through weekly vlogs, as well as trips she takes with her family and friends. Quickly, the hobby transformed into a project she became very passionate about.

Her passion for vlogging was also fueled by her interest in video editing; something she was exposed to in her sophomore year when she created her first video for the club Intersections. Jeong also deeply treasures the connections she has been able to make with people through her vlogs. Whether it is building a better relationship with an old acquaintance, or building a completely new relationship with a total stranger, her videos give her the opportunity to reach people.

“I like when people chat me and let me know that they really enjoyed my vlog or that something in my vlogs connected with them. I didn’t really expect that to happen,” Jeong said. “It’s crazy to think that even with just 55 subscribers, I can still meet new people, and I can interact with them in ways that I normally would not have been able to.”

Jeong’s experience with vlogging has given her the tools to document her life and the opportunity to meet a variety of new people, all while doing something she loves. She has been looking into expanding the types of videos she posts on her channel, by branching out into music and advice videos.