Opening up about government shutdowns 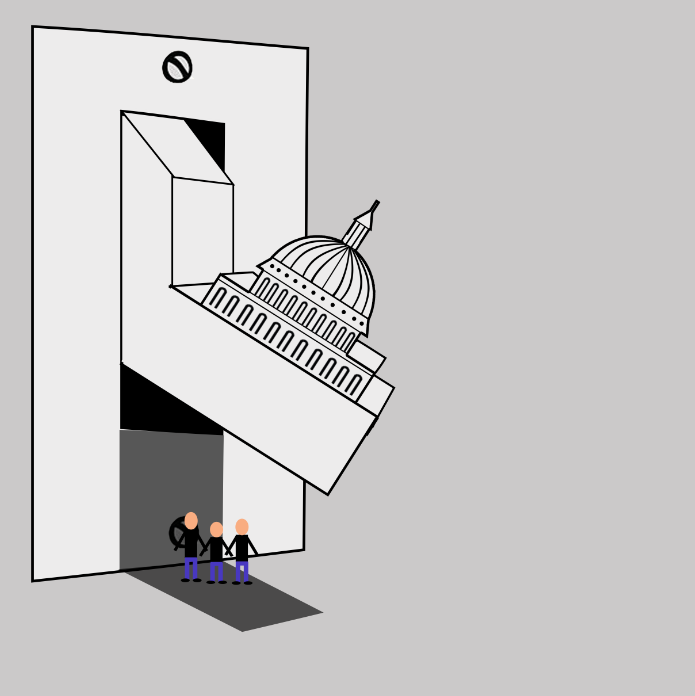 Many lives were affected by the longest ever government shutdown, which was caused by disputes over funding for the border wall.

35 days. Nine government agencies. 800,000 workers. 78 percent of whom live paycheck to paycheck. Zero pay. These points are just some of the effects of the longest government shutdown in U.S. history.

Government shutdowns occur when Congress fails to pass spending bills that fund government agencies due to conflicts between political parties or with the president. As a result, those agencies cannot continue operating, impacting the jobs and livelihoods of government workers.

The recent partial shutdown, which began on Dec. 22, 2018 and ended on Jan. 25, 2019, was caused by a dispute over the budget for the U.S.-Mexico border wall, which President Donald Trump promised to build in order to strengthen national security. Trump refused to sign a spending bill that included $1.3 billion for general border security, and instead then Speaker of the House Paul Ryan proposed a bill that provided $5.7 billion in funding for the border wall. The second bill, however, was rejected by Congress.  During the shutdown, the Democrat-controlled House had passed the first Senate bill in an attempt to reopen the government, but due to Trump’s higher demands for wall funding, the Republican-controlled Senate did not approve of the bill. Though it seemed to be a conflict between the two political parties, the president publicly took the blame for the government shutdown.

“[The government shutdown] seems to be a uniquely political weapon used by the president to try to achieve a policy, which is to get funding for a border wall,” said U.S. History and Government teacher Mike Williams prior to the end of the shutdown. “It’s a self-inflicted wound by the President because it’s largely unfeasible for a number of reasons: there’s really no crisis, and he’s unwilling to compromise to deal with the border issue separately.”

Republicans had the power to end the government shutdown earlier because they could have passed a funding bill and overridden the president’s veto with a two-thirds majority vote in the House and Senate. However, Republican Senate Majority Leader Mitch McConnell refused to approve a spending bill that Trump did not support. Some say their unwillingness to compromise reflects troubling divisions within the government.

Government shutdowns show our system of government is failing. Partisan divisions are so deep and bitter that government can’t function.  This is a very bad sign for the future of our democracy,” said Stanford Law School professor Michael Asimow. “The idea that government workers and contractors and all who rely on government services but otherwise have nothing to do with border security, can be held hostage to force Democrats to go along with Trump’s wall shows that.”

Due to an article of the Constitution that does not allow money to be drawn from the treasury unless an appropriation bill has been passed, government agencies cannot receive funding if Congress does not pass budget appropriations. Despite this, workers whose jobs deal with safety must continue on unpaid work. Other workers are furloughed, meaning they are on unpaid leave of absence. Federal employees will receive back pay once the government shutdown is over, but the situation is worse for federal contractors, who may not receive any back pay at all.

Those who live paycheck to paycheck fell into debt as they struggled to pay fees including rent, mortgages and medical bills. In addition, some had to draw out of their savings to pay for living expenses.

“Long-term, I feel the length of this shutdown will put some in financial distress,” said government employee Michelle Gilman*. “The first of the month is approaching, which is often a day that mortgage and rent payments are due. For some, this could mean eviction or a negative hit on their credit score.”

Furthermore, larger economic effects occurred as a result. Without pay, workers did not spend their money on travel, restaurants and other businesses. The Congressional Budget Office estimated the cost to the U.S. economy to be $11 billion, which is twice of the disputed $5.7 billion for the wall.

Government services were affected during the government shutdown as well. For example, national parks were closed, causing trash to build up. In airports, there were delays due to the absences of TSA agents, who had to work unpaid. Though the direct effect on the Lynbrook community is small, it is important to be aware of such issues.

“Having a good understanding of the present and the world around you builds a sort of empathy that’s important to have growing up,” said Junior State of America treasurer, Kanav Tirumala.