A look into seasonal depression: winter blues and summertime sadness 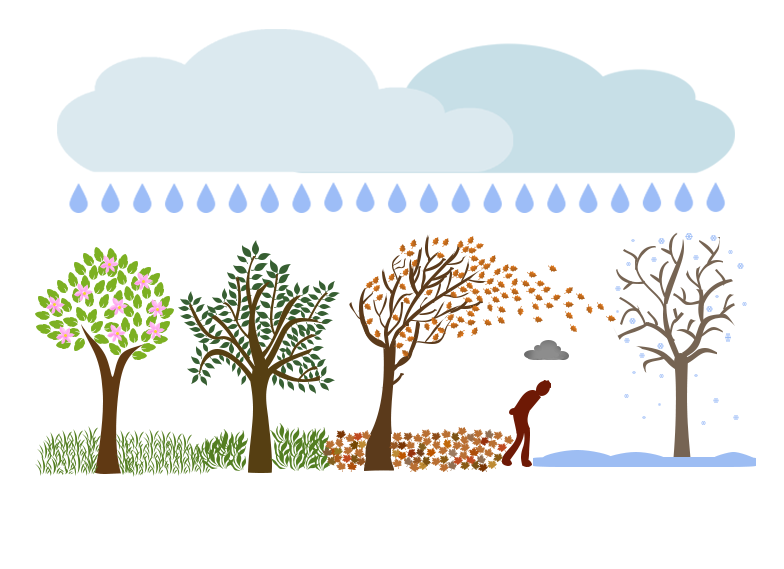 While it is commonly believed that sadness is typical during the winter months, the melancholy mood that some have is actually the result of Seasonal Affective Disorder (SAD). In other cases, a change in mood as a result of this disorder is experienced yearly during the summer months. SAD, commonly known as seasonal depression, is a mood disorder characterized by depression at the same time every year, usually during winter.  According to the Centers for Disease Control and Prevention (CDC), more than 3 million Americans are affected by Seasonal Affective Disorder (SAD) per year.

As a type of depression, SAD does not have completely unique characteristics when compared to other disorders. An individual diagnosed with SAD must fit all diagnostic criteria for major depression and suffer from depressive episodes during a certain season; this pattern must have also occurred for at least two years. Symptoms of SAD extend beyond sadness and often include fatigue, suicidal ideation and concentration issues.

There are two forms of SAD: winter SAD and summer SAD. Winter SAD is the result of the lack of sunlight during winter, which leads to symptoms of low energy, over-sleeping and cravings for carbohydrates. Summer SAD, which is less common than winter SAD, is the body’s response to the heat and humidity of the summer months; it is typically characterized by anxiety, irritability, insomnia and bursts of violent behavior. Symptoms may also vary in severity, from a mild form of SAD called subsyndromal SAD which is nicknamed “winter blues,” to the point where the individual’s ability to function is impaired.

“I think the problem is when people don’t exactly know about what SAD is and what it’s like,” said senior Michelle Chen, director of activities for the Society of Psychology and Sociology. “There is a stereotype that you are more sad in the winter, so people with SAD might not think they have it.”

Several factors may increase one’s risk of suffering from SAD. Those with a family history of depression are more likely to develop SAD than those without; according to the Genetics Home Reference, 25 to 67 percent of those with SAD also have a relative with a major mood disorder and 15 percent have a parent, sibling or child who also suffers from SAD. Similarly, those who already suffer from depression or bipolar disorder are also more likely to be diagnosed with SAD. Typically, SAD is more common in younger adults than older ones, with most SAD symptoms surfacing when a person is between 18 to 30 years old. Additionally, people holding certain professions are more likely to suffer from SAD; since SAD is triggered by limited exposure to sunlight, nurses and other health professionals who do shift work are at a particular risk.

While the causes of SAD are unknown, research has highlighted possible biological factors that contribute to SAD’s symptoms and explain the differences between summer and winter SAD. For winter SAD, the shorter winter days result in a lack of sunlight. An increase in darkness triggers the pineal gland to overproduce melatonin, a hormone which regulates sleep and causes sleepiness, leading to the lethargy and fatigue characteristic of winter SAD.

However, while melatonin overproduction plays a role in the symptoms of SAD, it alone cannot cause the disorder. Winter SAD is also associated with trouble regulating the neurotransmitter serotonin, which contributes to one’s happiness and regulates the body’s internal clock; low serotonin levels are linked to depression. A study by the University of Copenhagen found that those with winter SAD have 5 percent more serotonin transport protein (SERT) in the winter than in the summer. An increase in SERT produces a drop in the available serotonin levels, lowering the activity of serotonin and thus producing symptoms of depression. Together, high melatonin levels and low serotonin levels lead to alterations in one’s circadian rhythm, the body’s internal clock which responds to the daily and seasonal light-dark changes, and make it harder for SAD sufferers to adapt to the lack of sunlight in the winter.

“Often, people are relatively depression-free at the times when there’s more sunlight,” said Teri Quatman, an associate professor in counseling psychology at Santa Clara University. “Of course, those with underlying depressive symptoms can have them exacerbate during the times with limited sunlight, from fall through the end of winter.”

On the other hand, few studies have been devoted to summer SAD, as it is less common. However, the few researchers that have studied summer SAD hypothesize that it is caused by the rising heat and humidity of the summer months. Since summer SAD is not understood as well as winter SAD, those with it are more likely to not realize they have SAD or to be misdiagnosed with major depression, anxiety or dysthymia, a mild but long-term form of depression.

“For people that do have SAD, they might brush it off and say ‘oh, I’m just having a bad day’ when they actually need help,” said senior Jojo Chen, vice president of Society of Psychology and Sociology. “Especially since summer SAD is less talked about, it’s more likely that people will overlook it.”

The type of treatment received for SAD differs for every individual, based on different factors such as personal preference or severity of the disorder. Despite this, common treatments for SAD include medications such as Selective Serotonin Reuptake Inhibitors, which work to increase serotonin levels in the brain to ease symptoms, or psychotherapy, such as Cognitive Behavioral Therapy (CBT). The goal of CBT is to break down a person’s negative thought patterns or problems that seem overwhelming by changing the way he or she thinks about them. This may include helping the person identify negative thoughts and replace them with positive thoughts or behavioral activation, where a person identifies engaging and pleasurable activities to improve coping with symptoms.

The type of SAD one has also determines the treatment that they receive. Treatments for summer SAD include staying indoors during the middle of the day when temperatures peak, as well as keeping cool with cold showers, swimming and air conditioning; these all aim to mitigate the agitation and discomfort from the hot summer weather.

“Oddly, one of the most powerful interventions we have for [winter] SAD is exposure to high intensity lights for a period each morning,” Quatman said. “It seems to stimulate the pineal gland. Also, many people who find themselves seasonally depressed [in the winter] are aided by the seasonal addition of an antidepressant early in the approaching fall or winter season.”

For winter SAD, the best available treatment are light lamps to replace the lost light from the shorter days of fall and winter, which entails sitting in front of a light therapy box that emits a bright light for 20 or more minutes each morning during winter; patients usually improve within one to two weeks of starting this treatment. The bright light stimulates the part of the brain which connects circadian rhythms; activating this part of the brain at a certain time each day helps to restore normal circadian rhythms and alleviate SAD symptoms. Light therapy is continued throughout the winter, but some people may start it during fall to prevent symptoms. Light lamps are as effective as antidepressants for treating SAD but may not work for everyone. Some may need to sit in front of the light for longer periods of time or may need brighter light, while others cannot tolerate the light. For example, the light may trigger manic symptoms for those with bipolar disorder.

SAD may occur alongside mental health issues such as other depressive disorders, alcoholism, attention-deficit hyperactivity disorder (ADHD) or eating disorders, thus making it is difficult to diagnose. This leads to SAD being underdiagnosed and misdiagnosed since its symptoms may be mistaken for other mental illnesses. Despite this, SAD is arguably as critical as depression, and it is extremely important for those who think they may be suffering from SAD to reach out to get the help they need.

“SAD is one of those disorders that people don’t normally know about,” Chen said. “It’s not as commonly talked about as depression, for example, so it’s easy for people to feel like there’s something wrong with them [without realizing it might be SAD]. There’s also a stigma around SAD but that can be decreased if we get more people to understand it and talk about what it is.”