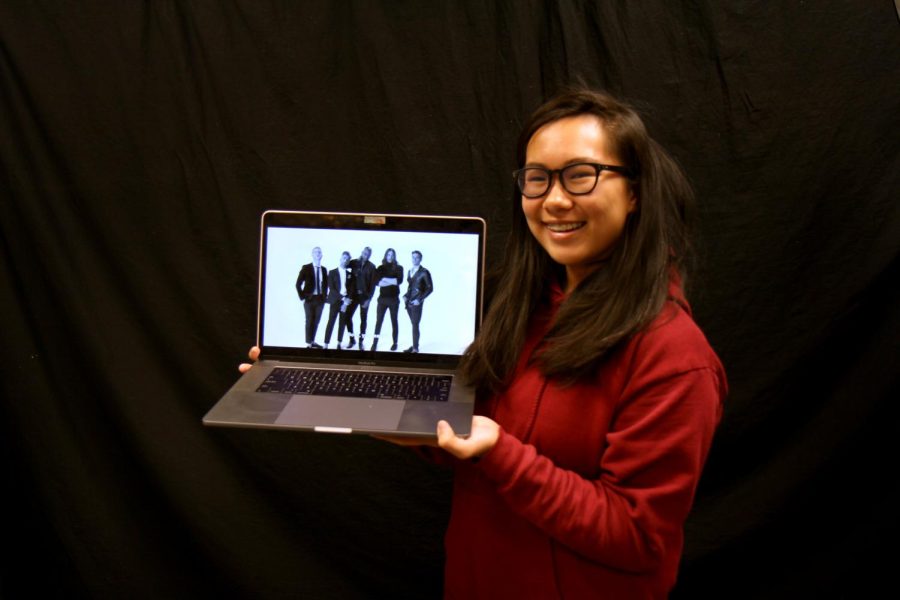 Nicole holds a laptop showing an image from the opening sequence of "Queer Eye." The photo is black and white and shows all five members of the Fab 5.

As a responsible Lynbrook student, I did what any other responsible student does over any three-day weekend (note the sarcasm): completely abandon the thought of Precalculus homework (sorry, Ms. Quindipan) and other responsibilities to spend my night tucked in my bedroom, watching Netflix for hours at a time.

After completing the latest season of “Grey’s Anatomy,” I stumbled upon a new show to watch: “Queer Eye.” For those of you who haven’t watched “Queer Eye” yet, here’s what happens in each episode: the Fab 5, a group of five gay men — each of whom specialize in food and wine, grooming, fashion, culture or interior design — collectively give one person’s life a makeover. This special person is nominated for the show by his or her family members, friends or coworkers; once nominated, this person’s house, style, diet and personal care routine will be transformed by the Fab 5.

It was love at first watch.

It took me a day to finish season one, and I cried watching the first episode. Within a week, I was sporting a “french tuck,” a look where you only tuck in the front of your shirt— a trend started by none other than Tan France, the show’s fashion expert. Jonathan Van Ness, the grooming of the show,  inspired me to make a coconut oil lip scrub and transform my own self-care routine. I began listening to Van Ness’s, podcast, “Getting Curious with Jonathan Van Ness.”

But aside from helping me dress better, the show also does more: it breaks down commonly-held stereotypes surrounding the LGBTQ community.

If I’m being honest, I was initially apprehensive to begin watching the show. I’m happy to see LGBTQ representation in media, but I was afraid that this show would uphold the age-old stereotype of gay men: flamboyant, feminine and obsessed with fashion. As I continued to watch, I’m glad to say that this show did all but perpetuate that stereotype.

The show is intimate and effectively highlights the unique personalities of each of the Fab 5 members. France is calm and collected; he’s also quick to run out of the rain to protect his hair. Van Ness, whose long hair looks significantly better than mine, is bright and upbeat. Antoni Porowski, the food and wine expert, and Karamo Brown, the culture expert, are much more laid back. Interior design expert Bobby Berk always ensures that the designs he implements are tailored to the life of the guest whose house he is redesigning.

When I first saw that the Fab 5 isn’t the stereotype of gay men I commonly saw represented in media, I was so thrilled I almost cried. It’s extremely important to me that there is positive representation of the LGBTQ community, especially in a time where the rights and safety of the community are threatened.

The Fab 5 is open about their sexuality and experience with being LGBTQ. On multiple occasions, the members have discussed the support, exclusion and discrimination they’ve faced as well as other aspects of growing up gay. They help break down the stereotypes that guests of the show hold, making sure to answer each question with respect and dignity. I’m happy to see that each member of the group is shown to be more than their sexuality: they’re funny, they’re unique and they’re enthusiastic.

In season one, the show gives insight into the life of a person of color in the U.S. In the first minutes of episode three, titled “Dega Don’t,” Brown is driving the Fab 5 to meet the contestant they’re mentoring in the episode. Along the way, however, they’re pulled over by a police officer. Within seconds, the fear in Brown’s eyes is evident, and France, who is sitting in the back seat, shares the same look. Brown and France are the only two members of the team who are people of color: Brown is a black man and France is of Pakistani descent. Van Ness begins to film the encounter, and tension settles over all of those in the car.

When Brown steps out to talk to the police officer, the officer reveals that he is  actually the one who nominated the episode’s contestant, Cory, for the show. All of the Fab 5 erupt in smiles, and Brown and France both exclaim “You can’t do that to brown people!” While the encounter was planned by the producers and is seemingly insignificant, its impact is much greater: later in the episode, Brown talks one-on-one with Cory, who is a police officer, about his experiences with police as a black man in America, particularly his fears concerning police brutality. The conversation is calm, respectful, and constructive, and both parties are open about their views; watching this event unfold allows viewers a chance to take note on how to address this sensitive issue in their own lives.

In the season two episode “Sky’s The Limit,” the Fab 5 give Skyler, a young transgender man, a makeover. This episode in particular is one of my favorites. Within the first minutes of the episode, a common misconception is addressed: the idea that all LGBTQ people share the same experiences and that every LGBTQ person knows the experiences of the entire community. France admits that he’s never met a transgender person before, and throughout the episode we catch glimpses of Skyler helping France to learn more about the transgender community. Porowski notes that even though the Fab 5 are all gay men, their stories are all extremely different. This episode highlighted the Fab 5 as they work to educate themselves on Skyler’s experiences, and they made sure to remain sensitive and respectful.

While many shows I’ve watched prefer to keep topics such as sexuality, racism and police brutality out of the spotlight, “Queer Eye” subtly brings them to light, making sure to remain sensitive and respectful when discussing them. The show dares to address issues that most shows of its kind hide; of the makeover shows I’ve watched, many choose to use degrading humor as part of their appeal and uphold traditional beauty standards. “Queer Eye,” on the other hand, is wholesome. It’s a lot more than just a makeover show, the Fab 5 care more than how the person looks: they aim to bring them confidence, to help them find beauty choices and diet changes that work for their lifestyle. The representation “Queer Eye” provides is a stepping stone to creating more LGBTQ representation in media, and its witty humor and lovable cast keep me coming back for more.

To Antoni, Bobby, Jonathan, Karamo, Tan and all those involved with creating “Queer Eye”: Thank you for producing such a show that does so much for me, as well as many others. The representation you provide and the work you all do to break down stereotypes about the LGBTQ community give me hope for the future.  I’m excited for future seasons of “Queer Eye”!

And on that note, I will return to watching Netflix.

(Just kidding. I have an essay to write and a Socratic seminar to prep for.)