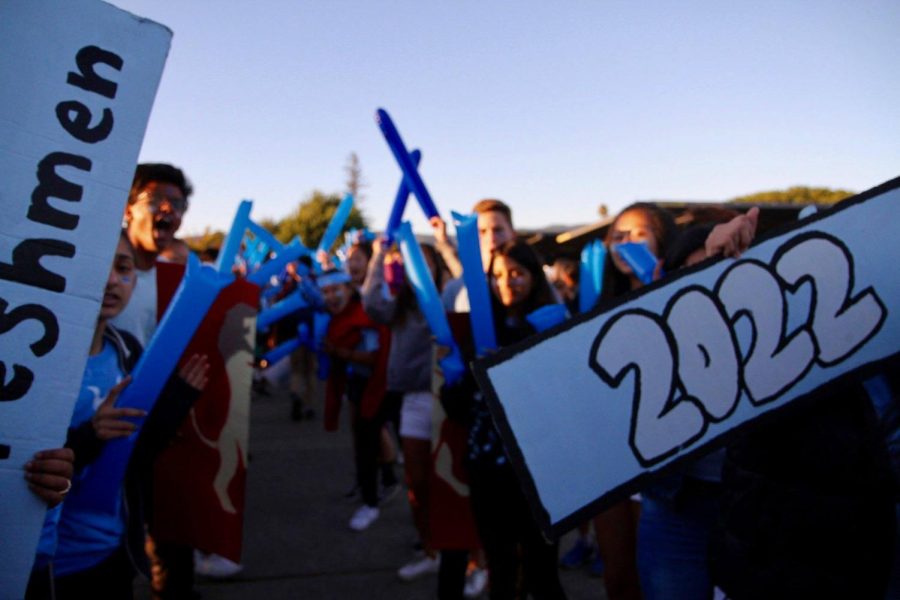 Class of 2022 welcomes students coming to school on the morning of their first Homecoming.

New school, new teachers, new friends, new experiences. The incoming freshman class has been introduced to the many unique facets of high school, facing excitement as well as difficulties. This year, the Class of 2022 encountered a new election timeline, resulting in the freshman class election being at the beginning of the new school year instead of the end of the previous year. That meant, however, that the freshman class would have to begin homecoming preparations without an officer team. After all twenty candidates worked hard to run clean campaigns, the freshman officers were finally selected.

Tim Jing was elected as the class president. He was the student council president at Miller Middle School for the 2017-2018 school year, and chose to run again because he enjoys being able to actively make a difference in the student body.

“I want to create better events for everyone by collecting feedback from my class and relaying it back to ASB in order to make sure everyone is enjoying their high school experience,” Jing said.

Jing believes that although the competition among the candidates made the election process more difficult, it also motivated everyone to do their best.

In his free time, he loves to play volleyball, and his favorite subjects are math and science. He looks up to sophomore class president Michael Zhao as an example of how to lead his own class. Jing also loves to travel, and feels it broadens his perspective of the world.

For this school year, his main goal is to ensure strong communication and transparency between the officer team and the class.

Joe Lin was elected as one of the two vice presidents. He was experienced with the general format of the election due to running for student government in previous years at Miller Middle School, so he was confident throughout the whole process. His only difficulty was effectively campaigning during brunch and lunch.

“My main challenge was getting to know my way around the school and getting used to it, because it was a new environment, and I didn’t know where people were,” Lin said.

Lin is originally from Virginia but moved to the Bay Area in 2005. Outside of school, he is a Boy Scout, and has been for almost four years.

“Scouting helps develop my life skills and is a very entertaining part of my life, where I get to socialize too,” Lin said.

Lin hopes that Homecoming was memorable for his class. Although they had a few hiccups as it was their first homecoming, Lin is proud of what they accomplished.

Shailesh Senthilkumar serves as the other vice president. He is familiar with the election process due to past experience, but found it difficult to communicate with people this time, especially because there were so many students of his class that he did not yet know.

“You don’t know where people are, so it’s harder to talk to them in person and make that connection,” Senthilkumar said.

Although communication was a challenge for Senthilkumar, the new high school environment allowed him to make new friends as he was able to interact with people he may not have had the chance to talk with otherwise.

Senthilkumar harbors an interest in photography as well as videography. He loves to play basketball and soccer with his friends. He is very open, so most people know a lot about him.

“The only thing most people don’t know is how to say my name,” Senthilkumar said.

He was both nervous and excited for homecoming, but watching his class made him immensely proud.

“I think it really brought our class together as a community, which is the most important part of homecoming,” Senthilkumar said.

His primary goal for this year is to ensure that the opinions of his class are incorporated in the decisions that the officers make.

Alexander Tai will serve as the class treasurer. Although he has never been a class officer before, he chose to run because he loves helping others. Tai found giving a speech nerve-wracking since public speaking is not his strong suit, making it one of the major challenges he faced during the election. In the end, facing his fears helped him become a more confident person. Tai says that even though winning the election felt incredible, that was not his main goal behind running for treasurer.

“The election helped me learn more about the class and meet people that I had never met before,” Tai said. “I think that was very rewarding.”

Until this election, he didn’t realize the amount of people in his grade that he had never talked to before, and this gave him the opportunity to reach out to them.

Tai enjoys playing basketball, running and playing the piano. One thing most people do not know about him is that he is a huge Lakers fan and has been since fourth grade.

Tai is grateful that his class has given him the opportunity to serve them, and hopes that he can unify the students from all middle schools.

Farhaan Khan was elected as the class secretary. He was previously involved in school leadership positions, but lost touch with student council after entering middle school. Over the years, Khan realized that he missed working with his peers.

“It was honestly a spur of the moment decision,” Khan said. “I realized that I wanted to be able to represent my class again, so I decided to give it a try.”

Although the experience involved hard work, he learned a considerable amount of useful skills, such as how to effectively communicate to a broad audience.

Khan enjoys playing tennis, cooking, and hiking in his spare time. He also has a deep passion for music.

“Music is a big part of my life. I listen to it everyday and it helps me with a lot of the things I do, especially when I am stressed or worried,” said Khan.

His biggest role models are his parents; he looks up to their achievements and aspires to be like them one day. Khan also looks up to Albert Einstein, and admires the dedication and perseverance he had.

“[Einstein] was really smart, and was underestimated until he proved himself, and now his work is widely known,” said Khan.

Khan is excited to once again be able to give back to his peers and cannot wait to see where this year takes them.

The entire 2022 class officer team is eager to begin working together and is confident that their peers have a lot of potential. The freshman officers would also like to thank the Class of 2019 for all their help with Homecoming and the first rally of the year, ensuring that everything ran smoothly, as well as for serving as role models to look up to as the freshmen class begins its high school journey.