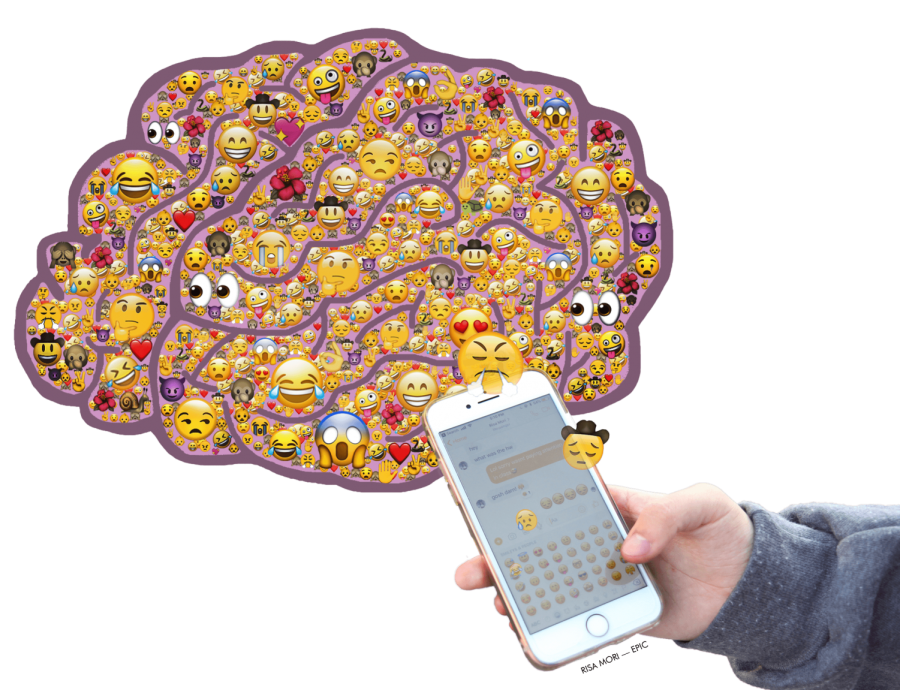 Five billion emojis are sent through Facebook Messenger in just one day. Nearly half of the comments on Instagram posts are captioned with emojis. With a total of almost 3,000 types of emojis out on the web, the Internet is filled with people expressing their thoughts and feelings with emojis every day.

The term “emoji” is derived from the Japanese word for “picture” and “character.” The first emoji was created by Shigetaka Kurita in Japan in 1999. When he was working for the Japanese mobile carrier NTT DoCoMo, Kurita created the first set of 176 emojis. In 2012, when Apple added an emoji keyboard to its latest software release at that time, the iOS 6, the popularity of emojis skyrocketed among users of Facebook, Instagram and other social media sites. Now, more than 10 billion emojis are sent each day.

When people have face-to-face conversations, their tones and feelings can usually be easily interpreted not only through words, but also by facial expressions, body language and the tone of the speaker’s voice. But when people communicate through electronic devices, words alone cannot always fully convey their emotions. This is where emojis come into play.

Owen Churches, a data scientist and psychologist at Flinders University, discovered in 2014 that when people see an emoji, their brain acts the same way as when they see a human face with the same emotion. Furthermore, looking at emojis can trigger the facial recognition response in the occipitotemporal parts of the brain, which are responsible for processing visual information from the eyes. This is a learned response ingrained into our heads by Internet culture; over time, our brains have created a link between an emoji and the emotions they trigger in our brain.

“In online games where people are trying to trade for my valuable items, I usually say something like ‘sorry, not exactly what I’m looking for,’ and then I add the ‘grinning face with sweat’ emoji to make my statement less harsh,” said sophomore Patricia Huang. “Without the emoji, it sounds rude and arrogant because many items in these games are hard earned.”

Other times, emojis can prevent harmless jokes from being misinterpreted as rude or hostile commentary. Including something as simple as a smiley face to the message not only adds a human touch to the text, but also makes the message easier to get across and more personal.

“Emojis can give extra information if I just want to make a comment that’s not to be taken too seriously, then I can put like a little smiley face after it,” said math and computer science teacher Mark Kwong. “If not face to face with somebody, some information is missed.”

Emojis can bridge the gap between remote communications on the Internet. Now referred to as the “universal language” of the Internet, emojis have changed our speech patterns. Many habits we use online are influenced by speech. In fact, people have started using only emojis to respond to texts.

“Emojis can be overused when somebody uses emojis in formal communication,” said math and computer science teacher Bradley Fulk. “For example, I wouldn’t put an emoji in a letter of recommendation or into communication that’s intended to be professional.”

As time passes, the number of emojis created has increased enormously and evolved with the advancing of technology. For example, in 2015 Apple added five different skin tones for each emoji that depicts a face or body parts to better reflect human diversity.

“I think recently the range of emojis with the skin tones that has become allowed us to be more inclusive,” said tech company employee Shanhari Sivagnanasundaram. “In terms of the impact of emojis on society or culture, it makes texting more human.”

Apple has also added an Animoji feature, starting with the iPhone X, which uses facial recognition to animate an emoji. With the Animoji, people can use their own face to animate their facial expression.

“I tried [Animoji] when it very first came out,” Fulk said. “I did it once to wish my sister happy birthday, and it was because I thought it was funny.”

The impact of emojis in today’s communication is significant toward our everyday online language and has become a part of the Internet culture. As emojis help fill the emotional gap when texting, people will continue to use emojis to express themselves emotionally in the digital world.