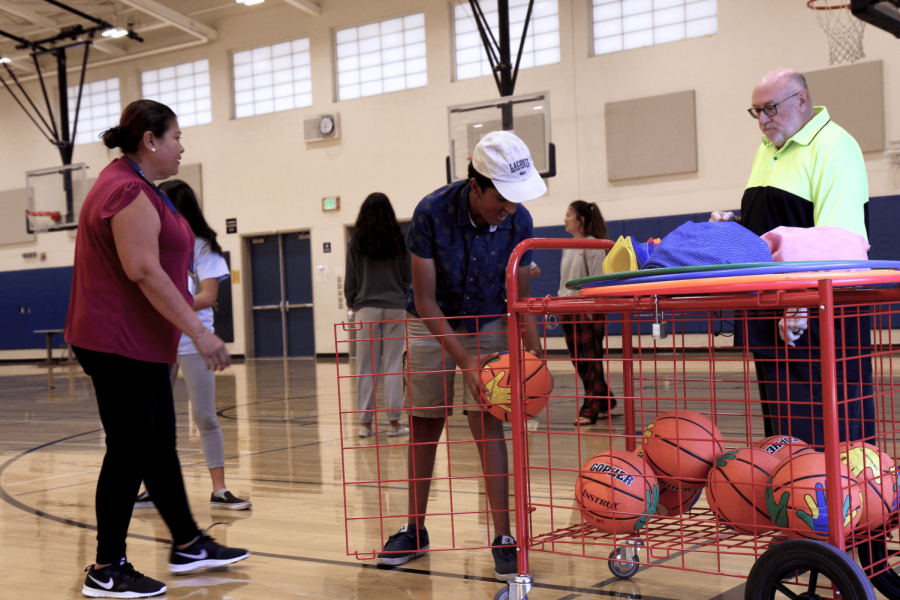 Inspired by her daughter with special needs, Athletic Director Jennifer Griffin decided to teach the special needs physical education class beginning in the 2016-2017 school year. After discussions with Special Education department chair Anne Greene, Griffin came up with the idea of PE Inclusive, a new PE class designed to bring mainstream students into the class to build strong interactions between mainstream and Academic Community and Transition (ACT) learners.

“You always want the least restrictive environment for any special education student,” Griffin said. “With PE Inclusive, we have the mainstream students in the class help teach the students in our ACT classes some sports and skills at a slower pace so we are able to break skills down more for better understanding.”

Special needs and Physical Education teacher Lauren Blazek, who came to Lynbrook four years ago as a para educator, a teaching aide for the special needs class, decided to take on the adapted PE teacher role due to her background working with individuals with special needs. Previously, Blazek has worked at the Santa Clara Parks and Recreation Therapeutics Recreation Department, where she focused on adults with disabilities, helping them with fitness and social skills.

“Growing up, I was around a lot of different disabilities,” Blazek said. “My uncle had Down syndrome, and almost everyone in my family worked with people who had special needs or in therapeutics. I just knew that was what I wanted to do with my life.”

In its pilot year during the 2017-2018 school year, PE Inclusive consisted of 15 ACT students, seven mainstream students and five paras. The mainstream students are referred to as buddies, which mainly include students who are members of the Viking Buddies Club on campus. This year, the number of buddies has grown to 10 following an informational meeting that was held for students who were interested. PE teachers also mentioned the class in their freshman PE classes as an option for students to take the following school year. The numbers of ACT students and paras have also increased to 19 and seven respectively.

Held during first period, PE Inclusive operates just like any other PE class. The year is divided into various sport units, which include soccer, basketball, badminton and tennis, volleyball, frisbee, fitness and swimming. The ACT students start every day with stretches and warm ups, such as a mile run. They then participate in simple activities related to the unit, allowing them to slowly , and students participate in activities such as monkey in the middle, which serves as passing and defense practice, and dribbling competitions.build their way up to playing the sport. The class is currently on their basketball unit The buddies lead by example through participating in activities and encouraging the ACT students.

“It warms my heart watching the friendships, which would not naturally happen out in the hallways, build between the students,” Blazek said. “I love seeing our buddies and ACT students talking to each other after class or even having lunch together.”

After joining Viking Buddies her freshman year, junior Julie Lee hoped to form stronger connections with the students she met through the club and decided that PE Inclusive would allow her to get to know the ACT students better.

“Since the class is during first period, it really lifts up your spirits for the rest of the day,” Lee said. “The students are very optimistic, which makes me realize how lucky I am to be able to play the sports that I can.”

“I wanted to challenge myself to see if I could connect with kids my age the same way that I connected with the younger kids over the summer,” Ramchandra said. “I also just wanted to be someone who was friendly and nice to everyone.”

However, PE Inclusive does not come without its challenges.

“Each day is very different with how the ACT students come to school feeling,” Blazek said. “Some days, it may go very smoothly, but other days, they may be having a really rough day, and things may be a little more challenging. You can’t plan for it since you really don’t know their mood until they get to class.”

As PE Inclusive continues to foster connections between mainstream and ACT students, Blazek and Griffin hope that the class will soon be offered at other schools.

“I would love to see PE Inclusive at our other district schools,” Griffin said. “It is a great way to connect the students in our special education department with the rest of the student body. I think it is such a unique class and so rewarding for all students involved, I feel every school should offer it.”

By bringing together mainstream and ACT students, PE Inclusive creates a deeper sense of community between the two groups of students.